Pulitzer Prize-winning composer and North Carolina native Caroline Shaw is featured as soloist in her own work, Lo 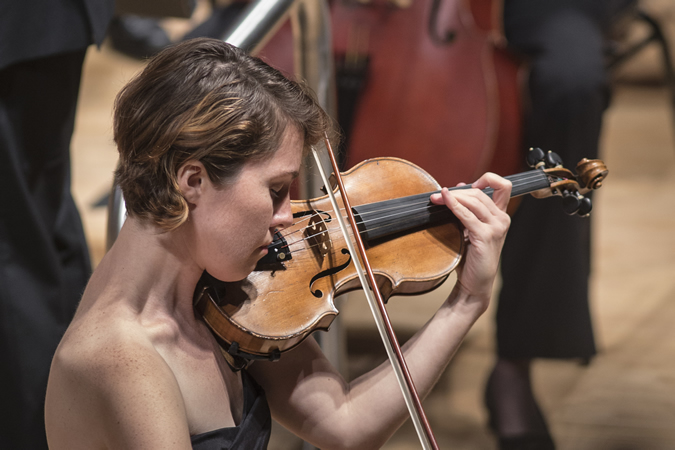 "I love being close to the players who are performing my music," says Caroline Shaw, who will perform the solo violin part alongside the musicians of the North Carolina Symphony in numerous performances of her own work, Lo, over the next month. "I'm able to more effectively communicate my sense of the music's style and articulations. It's also nice to look over and smile at each other once in a while!"

As both a composer and a musician, Shaw is a rarity in the classical music world. She plays violin, viola, and sings – and she is the youngest ever winner of the Pulitzer Prize for Music, awarded in 2013 for a work she composed for her vocal ensemble in New York City.

Shaw grew up in Greenville, North Carolina, where some of her earliest musical experiences were hearing the North Carolina Symphony perform Education Concerts at her elementary school. NCS, deeply committed to championing exceptional artists with North Carolina connections, co-commissioned and performed Lo with Shaw in 2015. A true advocate of the work, the Symphony features it again on a program in Raleigh (March 11), New Bern (March 12), and Southern Pines (April 1), led by Associate Conductor David Glover.

Shaw hesitates to call Lo a violin concerto, although she did take inspiration from Mozart's violin concertos – particularly in that the solo violin part at times sings out a phrase together with the first violin section. Yet, completely unlike a traditional concerto, the solo line is largely improvised, so that each performance is a new experience. "On the page, only about 25% of it is mapped out – just enough to give the conductor an idea of what's to come without getting in trouble!" says Shaw.

Robert Ward, another Pulitzer Prize-winning composer from North Carolina, held positions at the University of Winston-Salem and Duke University for four decades, residing in the Triangle for 35 years until his death in 2013. His work to be performed on this program, Jubilation Overture, is from an earlier time in his life, when he served in World War II – composing for and touring with an all-soldier revue, organizing a jazz ensemble, leading a band in the Seventh Infantry Division, and winning a Bronze Star for meritorious service.

"Jubilation Overture was composed during my Seventh Infantry Division's participation in the Philippines and Okinawa campaigns," Ward wrote about Jubilation Overture. "The piece reflects the optimism about the early ending of the war that we felt following the capitulation of the Germans rather than the combat conditions in which I was living."

Ward is a composer whose music resonates deeply with NCS musicians. "The musicians of the orchestra have always felt a special affinity for the music of Robert Ward; he was a great friend to us all," says bassist Bruce Ridge. "The first music I ever played with the North Carolina Symphony was Robert Ward's exultant Jubilation Overture. We performed the piece at Carnegie Hall in 1987 and then recorded it, along with three other pieces by Mr. Ward."

"Robert Ward was a treasure for the state of North Carolina," adds Associate Principal Cello Elizabeth Beilman. "I will never forget all the wonderful experiences working with Bob! He was always genial, intelligent, and full of witty stories from his fascinating life. We miss him but fortunately, we will always have his music!"

The second half of the program features Tchaikovsky's Symphony No. 4, of which the composer wrote, "I feel in my heart that this work is the best I have ever written." The symphony is a story of triumph over adversity, and the lively passages in the final two movements present exciting challenges for musicians. "I encourage folks to listen for the piccolo lick midway through the third movement – it is one of the most difficult passages in our repertoire, played at breakneck speed, twice!" says Principal Flute Anne Whaley Laney." Associate Principal Bass Robert Anderson adds, "The blistering licks in the final movement are a great challenge and great fun to perform."

Caroline Shaw's Lo and Robert Ward's Jubilation Overture are also programmed on the North Carolina Symphony's Kennedy Center performance in Washington, D.C., as part of SHIFT: A Festival of American Orchestras on March 29, and at a preview concert (Kennedy Center Bon Voyage) in Raleigh on March 24. For more information, visit nsymphony.org.

About the North Carolina Symphony
Founded in 1932, the North Carolina Symphony (NCS) is a vital and honored component of North Carolina's cultural life. Its 175 concerts and events annually are greeted with enthusiasm by adults and schoolchildren in more than 90 North Carolina counties – in communities large and small, and in concert halls, auditoriums, gymnasiums, restaurants, clubs, and outdoor settings. The Symphony's 66 full-time professional musicians perform under the artistic leadership of Music Director Grant Llewellyn.

NCS's state headquarters venue is the spectacular Meymandi Concert Hall at the Duke Energy Center for the Performing Arts in downtown Raleigh. The Symphony's service across the state includes series in Chapel Hill, Fayetteville, New Bern, Southern Pines, and Wilmington, as well as the Summerfest series at its summer home, the outdoor Koka Booth Amphitheatre in Cary. Collaborating with performers that range from classical artists, to banjo players, to jazz bands, NCS brings some of the world's greatest talents to North Carolina.

Committed to engaging students of all ages across North Carolina, NCS leads the most extensive education program of any U.S. orchestra. In alignment with the curriculum set by the North Carolina Department of Public Instruction, the Symphony provides training and resources for teachers, sends small ensembles into classrooms, and presents full-orchestra Education Concerts experienced by more than 52,000 4th and 5th graders each year. Music Discovery for preschoolers combines music with storytelling, and at the middle and high school levels, students have opportunities to work directly with NCS artists and perform for NCS audiences.

NCS is dedicated to giving voice to new art, and has presented 47 U.S. or world premieres in its history. In March 2017, NCS will appear at The John F. Kennedy Center for the Performing Arts in Washington, D.C., as one of four orchestras chosen for the inaugural year of SHIFT: A Festival of American Orchestras – an honor that recognizes the Symphony's innovative community partnerships and creative programming that inspires increased interest in new music. The Symphony will present works by composers with ties to North Carolina, including Sarah Kirkland Snider, Caroline Shaw, Mason Bates, and Robert Ward.

The first state-supported symphony in the country, NCS performs under the auspices of the North Carolina Department of Natural and Cultural Resources.