St. Olaf Choir Sings with Beauty and with A Message 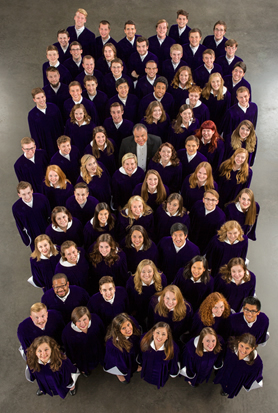 Once every five years, Triangle residents have the opportunity to hear the long-admired St. Olaf Choir in concert at Duke University. Their 2017 tour program offers eighteen choral works, all sung from memory, ranging in time from William Byrd (1543-1623) to several living composers. The entire program may be found in CVNC's concert preview article here.

This was a musical feast for the ear and for the soul. True to its over one-hundred year tradition, the St. Olaf Choir sings with an unsurpassed purity of sound and blend, with impeccable diction in several languages (no elisions to muddle the words), and with a clear sense of joy in what they are doing.

This is not your grandparents' St. Olaf Choir; under founder F. Melius Christiansen and his son Olaf, who between them conducted the choir for 56 years, the singing was all a capella, pioneering the American tradition of unaccompanied choral singing. Now, under the inspired direction of choir-alumnus Anton Armstrong, the programs are augmented by strings, woodwinds, piano, and percussion, with 15 pitched water glasses added for ethereal ambience. The singers number 75, a third of whom are not majoring in music, and rehearse five times a week to meet the demanding standards of their art.

Something not present in earlier years was the group's constant swaying back-and-forth, the singers holding hands through most of the concert. I hope this innovation is short-lived because it distracts attention from the music and instills a bit of vertigo when watched too closely.

When I first heard the St. Olaf Choir many years ago, their gossamer sound, sung almost with complete straight tone, was exquisitely perfect for works of Palestrina and other Renaissance composers, but never reached the more robust demands of Romantic-era composers such as Brahms. Their doppelgänger was the Westminster College Choir, whose darker, weightier sound was tailored for the major works they sang with the N.Y. Philharmonic Orchestra; when WCC sang Renaissance music, their sound was rarely stylistic. This newer edition of the St. Olaf Choir sings convincingly in all styles. There is, nevertheless, still a thread of Christiansen DNA in this group's sound; one work after another was sung with a sonority that can only be described as exquisite. This was heard often, first in Byrd's Ave Verum Corpus, then in John Ferguson's "Who is This" and Howell's "A Spotless Rose," and again and again throughout.

J.S. Bach's motet Singet dem Herrn was performed not as an a capella work (an unfortunately-long tradition dating from the 19th century and well into the 20th), but as Bach intended it, with the double-chorus vocal parts doubled by strings and winds. This performance lacked only a harpsichord or organ to complete the ensemble. While it would be best to separate the two choruses by a few feet, to emphasize the antiphonal character, space did not permit. The three movements, sung with little pause between them, sparkled with perfect tempos. The final fugue, Alles was Odem hat, lobe den Herrn presented the evening's only questionable phrasing, with the verb "hat" sounding more connected to "lobe" than to "Odem." (The translation: "All that has breath, praise the Lord.") The fugue, with its concluding "Halleluja!," was nevertheless Bach at its best, the rippling notes cascading from one voice-part to the next with never-forced, vibrant sound.

John Ferguson's "Who Is This?" featured violist Charles Gray, a St. Olaf College faculty member and veteran of significant orchestral positions. Ferguson composed this absolutely gorgeous work to a text by Sylvia Dunstan that centers on how the Christ is perceived. After an opening arioso by the solo viola, the choir sings Dunstan's poetry while the viola adds the melodies of the chorale Herzlich tut mich Verlangen and the plainsong Divinum Mysterium. Theological message and music became one in a moving synthesis.

While space will not permit comments on each work, several demand attention. It was good to hear music by the great Berlin synagogue composer Louis Lewandowski, whose late 19th century music used to be omnipresent in Conservative and Reform Jewish synagogues. His setting of verses from Psalm 101 were sung in Hebrew, with the original organ part set instead for strings. Avowedly Romantic in style, Lewandowski's music is ripe for rediscovery and use outside the synagogue.

Ralph Johnson's "This House of Peace" was composed for the 2008 opening of the Sacred Heart Medical Center at Riverbend, in Springfield, Oregon. Its text comes from words of patients and their families, and from a traditional Gaelic house blessing. It is a moving reminder of healing and peace which can arise out of troubled and anxious lives. Especially memorable were the poignant solos by oboist Julia Porter and bass David Gindra (who hails from Charlotte, one of four NC students in this Minnesota choir). Johnson's composition is in the American a capella choral style whose best-known exponents are Morten Lauridsen and Eric Whitacre.

Although conductor Armstrong planned this program last September, its inclusion of several texts which pray for peace, as well as Jeffery Ames' "For the Sake of Our Children" became particularly poignant on a day when news of an anti-terrorist action by US forces in Yemen told of the death not only of a US Navy Seal, but also of a number of women and children. The choir again took on a homiletical role as they sang, "O God, save the children. Shelter them with your loving arms. May your angels guard and protect them, we pray."

Hearing this choir sing György Ligeti's Hungarian-text "Night/Morning" showed the choir's mastery of a difficult choral idiom and made me hope to hear them someday sing Ligeti's Lux Aeterna, a 16-voice a capella work used in Stanley Kubrick's film 2001: A Space Odyssey, because their sound would be perfect for that music.

Also demanding mention were the three unaccompanied-singing traditions: American folk songs/hymns ("Shenandoah," "Amazing Grace," and ""Wondrous Love"); settings of Lutheran hymns by F. Melius Christiansen ("O Day Full of Grace" and "Beautiful Savior"); and spirituals ("Didn't My Lord Deliver Daniel," in a superb setting by Moses G. Hogan, Jr.). All of these weren't just "icing on the cake," but were yet more examples of how the choral voice can "sing when the Spirit says 'Sing!'" and leave an audience with the knowledge that no matter how ugly the world's retreat from civilization can be, the beauty of music remains.

In his post-concert remarks, Armstrong reminded the audience of the eternal qualities of peace and of humanity which music, at its best, represents, and for the folly of consigning support  for the performing arts, represented by agencies such as the National Endowments for the Arts and for Humanities, to any budgetary scrapheap.

Thanks to St. Olaf College and its musical ambassadors for bringing such needed beauty, tears, and serenity to those who filled Baldwin Auditorium to hear their messages of care, concern,  and hope.