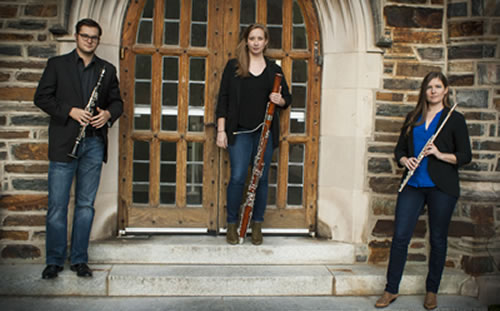 At the Beyù Caffè in downtown Durham, the Mallarmé Chamber Players put together a program of interesting music composed in the 21st century illustrating a variety of compositional techniques employed in the search for new sounds – in this case, for three woodwinds and percussion. The young up-and-coming artists featured in the program were Ellye Walsh - flute, Jessica Kunttu - bassoon, Andrew Warwick - clarinet and Cameron Britt - percussion.

The opening piece, Shadowplay (2015) for clarinet and bassoon by Andrew Martin Smith was performed by Warwick and Kunttu. It began as a congenial conversation shifting back and forth between the two instruments. Sometimes a response was an inversion of the original comment, sometimes it was restated in an altered pattern. As the music progressed the conversation became more complex and outspoken. Harmonies and dissonances occurred as agreements and disagreements, to be followed by resolutions. It was helpful in listening to this piece to recall the ancient form of Chinese theatre that inspired it and provides the title.

Slovakian composer Črt Sojar Vogler (b.1976) has pursued studies of the psychological reception of music in attempts to understand how to combine tonal colors and dissonances. His 2002 composition, Trio, Op. 67 for flute, clarinet, and bassoon, may have been written early in this period of exploration. Still, it demonstrates an impressive sonic experience.

The first movement begins with monophonic chords of rich harmony and carefully placed dissonances, then develops in counter point allowing the three artists to each shine and produce a very pleasant listening experience. The second movement was quite dramatic with intense harmonies. The third movement skipped along most of the way, but was laid back enough for some lyrical solo work. The artists performing here were Walsh, Kunttu and Warwick.

Calling (2011) for solo bassoon by Dai Fujikura, truly falls into the category of avant-garde – and successful as well, having claimed a spot as a staple in the contemporary solo bassoon repertoire. This is the kind of music the philistines object to: "There is no melody," they say "It's just noise."

Fujikura, a native of Japan, has employed a variety of compositional and performance techniques to produce an admittedly challenging experience for both performer and audience. The melody is there, sometimes in fleeting lyricism, sometimes spread out over the range of the instrument.

Performance techniques include using precise fingerings to produce multiple pitches. Quartertones are produced, fluttertonguing is employed. At one place the composer's performance instructions read, "WILD, play like you are playing heavily distorted electric guitar." Fujikura says he composed this piece while imagining someone long ago playing a wild instrument from a hillside to send a signal of alarm to a neighboring village. It makes sense. It is music. Kunttu did an outstanding job wrestling with the beast. Her goal in performing this piece, she said, was to convince herself of the validity of the piece. Having done that, the audience was convinced as well.

The Flesh Needs Fire is a dramatic work for flute, clarinet and pre-recorded electronics displaying a wide range of unconventional sounds. The electronic material includes numerous pitched and un-pitched sound samples. The flute and clarinet also use a variety of performance techniques including multiphonics, pitched noise, overblown harmonics, whistle tones, and articulated air.

The composer Mario Diaz de Leon says he was focused on creating a delicate balance between traditional elements of pitch and rhythm with acoustic and electronic noise, … with dramatic contrasts. There were some very wiry dissonances and a chirpy playful passage near the end. Walsh and Warwick held their own with the electronics and provided a dramatic and balanced performance.

Duke faculty member, Anthony M. Kelly, wrote Grist for the Mill on a commission from the Mallarmé Chamber Players in 2006. It was inspired by reading about early corn mills and the exotic names for their various parts and workings, which became the titles of the movements of his composition: "Wolf Gyrator," "Invincible Separator," and "Bran Shaker." It is infused with warm blues harmonies and iconic jazz riffs which seem right at home in the classical environment. In this performance, the three wind instruments were joined by Britt on the marimba and drums for a rich interpretation.

The concluding selection was Inner Circle (2004) for flute, clarinet, and marimba by Timo Andres. Beginning with what is almost a fugue, the flute enters followed by the clarinet and then the marimba. In the aleatoric (up-to-chance) segment there were rapturous sounds by joining trills and arpeggios leading to a chorale of peace and strength. There was a return to the opening theme and a very abrupt ending.

Music is a living art. It moves from age to age, reflecting and shaping the mood of the times. It will not stand still. The masterworks of the past, some of which came into being in spite of great consternation, still have much to offer, and the future offers even more.

The bright young people who brought us this program have invested in the music of the future and the future of music. They have moved closer to mastery of their chosen instrument; they have stretched the possibilities of music and all that music means for themselves and for us. As their careers blossom, they will make music that will comfort us and challenge us, that will entertain us and disturb us, that will take us on great journeys of both the inner spiritual world and the physical world we live in. They will make music that will help us to know ourselves better and will make us more capable of understanding our neighbors, even those that are quite different from us.