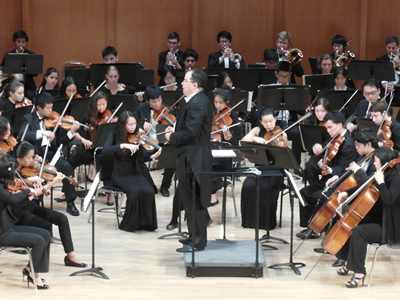 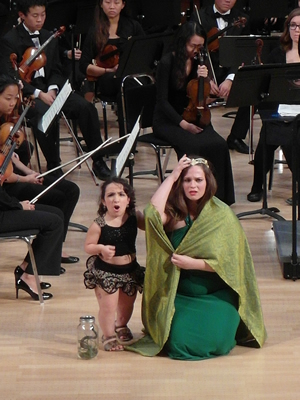 Duke Symphony Orchestra under the leadership of Harry Davidson presented the second in “A Fall Season of Musical Shakespeare,” celebrating the inspiration the Bard has had on musical creativity over the four hundred years since his death, which has been observed this year.

The program began with Haydn’s Oxford Symphony (No. 92) which was completed in 1789 as one of a set of three symphonies that had been commissioned by the French Count d'Ogny. It became known as “Oxford” after Haydn conducted it at a ceremony in 1791 in which he was awarded an honorary doctorate by Oxford University. Of course, this has nothing to do with Shakespeare. But what it did in this evening’s concert – and did marvelously in the midst of this season obsessed with sugary holiday hits – was to clear the air with Haydn’s always clever and inventive pure art.

While I have never attended a rehearsal of the Duke Symphony Orchestra, I believe I would be safe to wager that Maestro Davidson places considerable emphasis on ensemble performance, especially attacks and releases. This comes through in the conducting gestures he uses to maximize the precision of these elements and nuances. It paid off throughout the symphony.

After a slow and gentle introduction, the first movement of the Oxford Symphony is an adventurous journey with contrasts keeping your attention. The second movement is dominated by a song-like melody into which a contrasting middle section for woodwinds only is inserted. The third movement, a swinging minuette, is composed with phrases of six measures as opposed to the normal four-measure phrase and added syncopations and stops. All of these elements would be found to be humorous by the audiences of Haydn’s time because they were so unusual. The fourth movement, characterized by contrasts of tension and release, is slightly faster and shorter than the first movement, giving it a climactic ending.

The DSO has an abundance of strings, especially violins and cellos, and this makes for a natural warm and rich sound. Some of the slow cantabile passages were gorgeous. The faster passages were crisp and lively, and interpretive nuances were timely and well-done.

Ralph Vaughan Williams’ Serenade to Music was composed for a grand occasion: celebrating 50 years of musical leadership by Sir Henry J. Wood. Vaughan Williams scored the piece for 16 specific soloists with whom Wood had worked over the years. He went so far as to put the initials of the singers over the intended parts for them. The orchestration is lush and gorgeous. Rachmaninov was sitting in the box with Lady Wood after having performed his Second Piano Concerto and is reported to have wept openly at the beauty of the Serenade.

For tonight’s performance vocal supervision and coaching was provided by David Heid. It was unspeakably marvelous. To have brought together sixteen vocal artists of this caliber and with strong local ties must have taken some doing and for this we are deeply indebted to Heid. You will recognize many of these: Sopranos: Susan Dunn, Shafali Jalota, Elizabeth Linartz, Andrea Moore, Altos: Martha Anderson, Sandra Cotton, Kaswanna Kanyinda, Emily Levinstone, Tenors: Vasco de Castro Botelho, Wade Henderson, Jianghai Ho, Timothy Sparks, Basses: Ken Davis, Ted Federle, Joseph Tan, Robert Wells.

The performance by DSO was outstanding and up to the challenge in every way. There are arrangements of Vaughan Williams’ Serenade to Music for chorus and soloists, for orchestra and for orchestra and violin solo. They are all stunningly beautiful, but the one we heard tonight was special, a rare treat, and yes, it brought tears to my eyes.

Readings were offered to set the scene for the music, as it were. Alonzo Saxton II read King Henry and special guest (Harry Davidson) was Falstaff in a reading from Henry IV. Gvantsa Ivanishvili read Act 5, Scene 2 from Hamlet after which the orchestra played the somber “Funeral March” from the film music which reflected the tragedy in epic proportions.

After hearing Walton’s A Shakespeare Suite from Richard III, Jaybird O’Berski, Director of The Antic Shakespeare Company at Duke University delivered the well-known speech that opens Richard III: “Now is the winter of our discontent.”

The program closed with the Prelude from Richard III. Walton was fond of composing for films, and some of his film scores are high art. He had a knack for writing evocative music which reflected the scene and time of the action. In the music played by the DSO tonight there were brassy fanfares, dirges, romantic longing. The first chair soloists in the orchestra had ample opportunity to play tender music for intimate scenes.

All in all, this was a fine and entertaining concert. It was a joy and a pleasure to hear these enthusiastic mostly young musicians make such outstanding music.