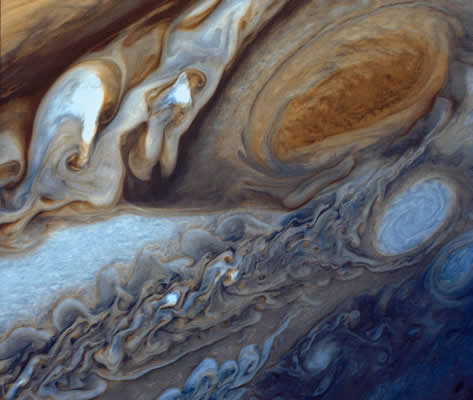 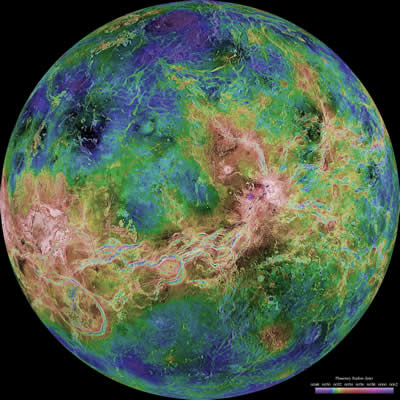 
Venus elevation map: Hemispheric map of Venus, with colors representing elevation. This radar image was taken by the Magellan spacecraft

The North Carolina Symphony played an imaginative program devoted entirely to works revolving around the theme of the cosmos. Held in Wilmington's still-new Wilson Center at Cape Fear Community College, all the works were for large orchestra. Especially in the concluding Holst, the concert was a showcase for the hall's clear, resonant acoustics. The challenging program was led by Venezuelan-born guest conductor Carlos Izcaray.

The first piece was by the Israeli-born composer Avner Dorfman. Born in 1975, Dorfman grew up in Tel Aviv, Israel, where he studied composition at Tel Aviv University. Later he lived in New York where he received his doctorate in composition from The Juilliard School. This piece was inspired by the fact that in taking up teaching at Gettysburg College – in a town much smaller than Tel Aviv or New York – he was seeing the stars nightly and experiencing nature in a much more vivid way. This turned him to the primal vision of the night sky as perhaps it was experienced by ancient peoples.

This dynamic, colorful work was titled Astrolatry (worship of the heavenly bodies). On the one hand it is a meditation on the dark night sky gradually seeming to fill with stars. On the other, it is an evocation of a primitive tribal rite. This latter is marked "with a techno feel," and the work as a whole is a juxtaposition of the atavistic with the modern. The piece vacillates between the contemplative and driving rhythms – the latter a hallmark of Dorfman's music. The evocative, atmospheric orchestral colors of the opening give way via a rapid descent to the onset of energetic rhythms. A fade will be followed by another buildup. The marimba contributes an oscillating figure which can feel stable and yet give a sense of suspension.

The orchestra imparted the driving force which the work needed. The challenging rhythms were crisp. This was helped by Izcaray's clearly defined beat, which tended to be large most of the time and usually mirrored with his left hand. This made sense in such rhythmically challenging music.

The next work was blue cathedral (written all in small letters) by the American composer Jennifer Higdon. Higdon is one of America's best-known living composers. She won the Pulitzer Prize in 2010, and blue cathedral has been performed over 600 times worldwide. The piece was written to commemorate a personal tragedy – the death of her younger brother at the age of 33. However, it is not at all mournful; instead, it is elevating in spirit. Its sound world evoked the celestial perhaps the most strongly of the three works on the concert. Distant bells open the piece and set the mood. The flute and clarinet personify her and her brother, sometimes intertwined such that the listener might believe heaven is communicating with Earth. The traveler from Earth can be imagined passing through a blue glass cathedral in the sky into open space.

In this piece the North Carolina Symphony's wonderful wind section had the most chance to excel. Phrasing was sensitive and delicate, with the English horn joining the flute and clarinet in lyrical expression. The brass shone in the energetic central buildup. The ending, with percussion beats signifying the age of the composer's brother at his death, shrouded the quiet conclusion in mystery.

The second half was devoted to the iconic The Planets by Gustav Holst. This seven-movement piece is written for massive orchestral forces with late-Romantic opulence. It has joined the list of multi-movement symphonic poems perhaps best embodied by Also sprach Zarathustra of Richard Strauss, and which found a worthy successor in the epic, modernist Turangalila Symphony of Olivier Messiaen.

The return to large-scale Romantic repertoire brought out great passion from both conductor and orchestra. Izcaray called forth lush, sweeping lines and gripping drama; indeed, he seemed almost to be in love with the act of conducting. The orchestra's brass shone through with blazing power, causing the large hall to ring with the sonority of the massed choir. Among the memorable moments of the performance was the beautiful lyricism of the "Venus" movement, so much in contrast with the preceding war-like music of "Mars" (where John Williams' Star Wars music seems to have been fully prefigured). Beautiful phrasing made an impression here, as did marvelous sonority at the end. "Jupiter" was bright and jubilant; the whole came over with the drama of an epic playing out on film. Lush, grand, and imposing would describe the experience.

The sustained atmosphere of "Saturn" was just as effective; indeed, its soft expression was quietly intense. The whimsy and grand march of "Uranus" were most effective in their contrast, and the concluding "Neptune" was magical. The hushed entry of the choir at the end was gripping, like a celestial choir calling all to a place of wonder.

The North Carolina Symphony deserves great appreciation for performing significant amounts of recent music, something they are doing with regularity. This expands the experience of listeners and brings fine younger talents to a hearing. It is not to be taken for granted, as the challenges are substantial. We in North Carolina – and on the coast in the Port City – are greatly the richer for the artistry of our first-class orchestra.

This program repeats November 18 and 19 in Raleigh, where the symphony will join forces with the North Carolina Museum of Natural Sciences to combine the music of The Planets with images from NASA missions sent to explore the planets of our solar system. For more on this collaboration see the preview of the Raleigh performances. To find out more about these two performances see our sidebar.