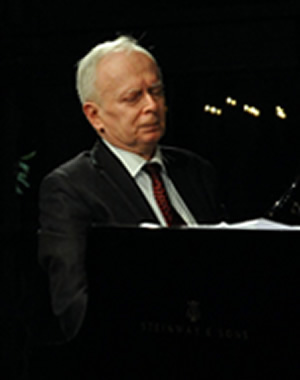 A monster concert, given in the recently revamped NC Museum of Art auditorium, capped this year's Paderewski Festival. By "monster" I mean large, as in old-fashioned, generous, sprawling – a program that might have been right at home for Paderewski himself, back when bits of this and bits of that sometimes stretched cultural events to the three-hour mark or more, as was the case on this occasion.

The featured artist was pianist Janusz Olejniczak, widely known and admired for his film appearances – in The Pianist, for which he plays the keyboard music, and La note bleu, in which he portrays Chopin. Joining him in the first part of the program was the dazzling young Polish violinist Paulina Sokołowska. Bios of both artists may be found at the Paderewski Festival website.

The importance of these concerts, of which this program capped the third annual round, cannot be overstated. There are many recitals hereabouts, even as they seem in many places to be increasingly rare. But the Paderewski Festival organizers – Raleigh's Mark Fountain and Paris-based Artistic Director Adam Wibrowski (short bios of whom are here) – seem to be absolutely atop the European piano world, so the artists they bring here, in many cases for regional or national debuts, are the cream of the current crop. The prime figure in this grand finale is a much more established player, but his work is not widely known in this part of the pianistic forest. Overall, the results were revelatory. We CVNCers are happy that funding from Raleigh and Wake County agencies and patrons enabled us to cover all four of the festival's concerts this year.*

The beginning of this program, presented before a sold-out house, the packing of which took a few minutes of the presenters' time before the music could commence, was straightforward enough. The offering was Paderewski's Violin Sonata, Op. 13, a rarity that Wibrowski explained was not a mere flight of fancy for its composer, inasmuch as he grew up with the sound of a violin in his ears. Still, it's not often heard, and I suspect few folks in attendance knew it. (There are performances on YouTube, and the score is available in the IMSLP public domain library.) Like Beethoven's works in this form, Paderewski's might well have been called a sonata for piano[forte] with violin, for the keyboard part is considerable and complex, and truth to tell there was at the outset a bit too much piano, the instrument often seeming to swamp the generally soft-spoken fiddle. But the piece grew on us, and as it did so it became apparent that it's a dramatic, engaging work with plenty of opportunity for both halves of the equation (as it were) to shine. And shine they did, in the end earning waves of grateful and enthusiastic applause. This in turn led to two encores plus an admirable bit of filler. First up was the Serenata by Moritz Moszkowski (German-born but of Polish descent), a piece whose fame spread worldwide thanks to an old record by John McCormack and Fritz Kreisler. A second encore was quickly proposed, but part of the piano score had gone missing, so while Sokołowska fetched another, Olejniczak offered what seemed like an improvisation on the Lullaby from Krzysztof Komeda's score for Rosemary's Baby. And then when the violinist returned, we were rewarded with a second, far rarer Lullaby, this one by Emil Młynarski (born in what is now Lithuania; he was the founding conductor of the Warsaw Philharmonic).

There was an intermission at this point, after which the rest of the concert – all Chopin (with one exception) – began.

I mentioned "monster concert" at the outset. One of the attributes of these events, long ago, was the presentation of a list of compositions, often of considerable length, from which the artist(s) would select pieces according to whim, inspiration, barometric pressure, etc. The program for this concert contained such a list, representative of many of Chopin's finest compositions. It encompassed a nocturne, some mazurkas, the Barcarolle, two waltzes, the Berceuse, a ballade, the second Sonata, and a scherzo. We already knew how magnificent this pianist is, based on his work in the Violin Sonata, so the crowd was spell-bound as he began with the posthumous C-Sharp Minor Nocturne, a work that had been announced as a departure from the printed program. Spell-binding is as good a description as any, for this is a pianist who combines the most distinguished attributes of "Old School" Chopin playing with thoroughly modern training, keen artistic sensibility, and technique to burn. That Old School approach extended to keeping the hands hovering over the keyboard between selections, so as to discourage applause. (There even seemed to be a bit of "noodling" here and there, in the manner of Josef Hofmann,who improvised bridges between numbers; some of his music was included in the first of this year's recitals.) There followed another departure from the published program: the "Military Polonaise" (in A, Op. 40, No. 1) infused the place with grandeur as only the best, most rousing music, realized by an absolute master, can do. Thereafter the course of the afternoon was at least anchored in the program, but the selections were delivered in a random order that made sense, musically (in terms of key relationships, in particular) but that nonetheless left many of us – including some eminent piano teachers and specialists – asking neighbors "Which one is it?"

Thus there were some mazurkas, the aforementioned Scherzo, two waltzes, and the Ballade No. 1. We've heard some great Chopin players here, going back a lot of years; Olejniczak is among the very best. Everything he did seemed "right" (and I don't mean politically), and everything seemed also fresh, so people were unusually attentive (or so it seemed) as they listened, and the only distractions were those whispers – and sometimes audible gasps of amazement.

The second intermission, past the two-hour mark, was thus welcome, but took with it approximately half the audience.

The concert then ended with triumph and introspection as the visitor delivered the Sonata No. 2 (with its famous funeral march), the Polonaise in A flat. Op. 53, staggering in its brilliance, and two encores – a Piazzolla tango (dedicated to Fountain's other half, pianist Brenda Bruce) and the "Minute" Waltz, dispatched in perhaps record time (but still not clocking in at 60 seconds).

By this time it was shortly after 5 p.m. and the museum was officially closed. It was indeed a monster concert, overflowing with musical goodies – a concert that will not soon be forgotten. Those who remained cannot have been disappointed.

Note: With the help of the presenters and the artists we append the revised program as it was played so those who were puzzled about what was what may figure it all out in retrospect!