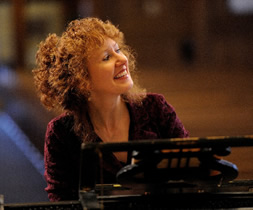 Making music is one of the most beautiful and human responses to tragedy. The North Carolina Symphony dedicated the performance of one of its Friday Favorites series to its long-time operations and general manager, Hiram Black, who passed away last month. It was a fitting and heartfelt tribute to a man who was a lifelong lover and supporter of music; Black served in one of those positions that is rarely applauded but without which formal classical music cannot exist.

The program, performed under the baton of Jeannette Sorrell, featured such classical favorites as the Bach Double Violin Concerto, selections from Handel's Water Music, a little taste of rearranged Vivaldi, and the ballet music from Mozart's Idomeneo. Not adventurous, perhaps, but since this series is marketed toward students and retirees, it was well-received.

Sorrell took an approach to Baroque music that emphasized the omnipresent "doctrine of affections" from the period. The drama in the dynamics and phrasing were brought to the forefront – sometimes to a fault. Taking a more romantic approach to Baroque works can be a slippery slope; some audiences tend to approve of a more theatrical interpretation, but others find that intellectual pleasures of supremely well-crafted counterpoint tend to fall by the wayside. Maestra Sorrell spoke about reawakening the excitement and energy in the works on the program, a goal that she certainly achieved. However, some of the subtleties of the works were lost in the process.

Selections from Handel's Water Music Suite No. 1 went quite well, with both horn players contributing the distinctive timbre of the natural horn. The grace and agility of both the bassoon and oboe parts were especially well highlighted by the skilled players. Bach's Double Violin Concerto, however, was clearly the audience favorite of the day. Featuring two excellent soloists, Elizabeth Phelps and Jacqueline Saed Wolborsky, the concerto was a nuanced dialogue between the two violins and also between the soloists and chamber orchestra. The smaller forces employed both furthered the authenticity of the recreated original context of the Leipzig coffee shop and also highlighted the individuality of each musician without sacrificing unity.

A point of interest that could have been addressed in the otherwise excellent program notes was Sorrell's decision to lead from the harpsichord for the Bach and Vivaldi works, even though the ensemble already included another harpsichord. Since both players appeared to double each other, causing balance issues, it was not immediately apparent what prompted the choice to have two harpsichordists playing simultaneously.

Vivaldi's take on the Renaissance dance melody, "La Folia" was originally written for two violins and cello, but Sorrell had arranged the piece for two solo violins (the same soloists as the previous piece) and chamber orchestra "so all of us could join in the fun." Sorrell highlighted the Portuguese dance origins of the tune, which traditionally included a mad dash to the finish, with a nicely-paced increase in tempo up to the end of the work. Most of the arrangement was quite effective, with only a few spots that would have probably fared better as a solo cello line. Sorrell engaged in loud, rhythmic, and sometimes syncopated stamping throughout this work – a distracting and puzzling element in an otherwise strong selection.

The final piece was the most programmatically interesting work on the program: ballet music from Mozart's Idomeneo, Rè di Crea, K. 367. The differing characters of the Chaconne, the lovely woodwind writing in the Passe-pied, and the lilting character of all of the Baroque dances employed by Mozart made for a rich and spritely finish to the concert.

The turnout for this noon concert was quite robust. While noon concerts don't exactly appeal to the elusive younger audience that so many classical music organizations are courting, they are very audience-friendly for older patrons. It was exciting to see so much enthusiasm in an older crowd. While a few comments regarding Hiram Black (or even Veteran's Day) would have been fitting, perhaps letting the music speak was the best remembrance.

This was an abbreviated version of a program that will be performed twice more this weekend in Southern Pines and Chapel Hill. For details, please see the sidebar.