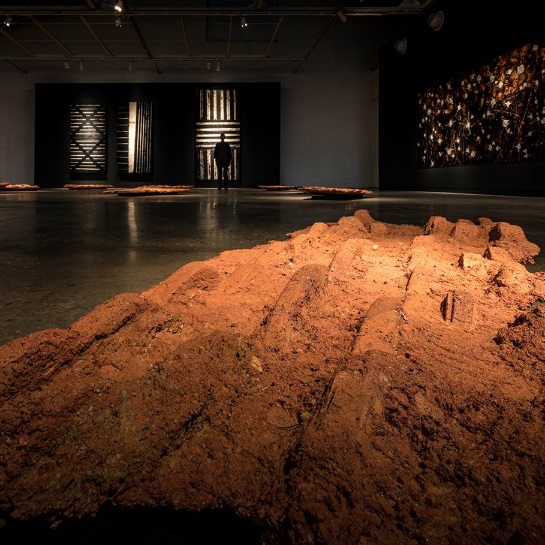 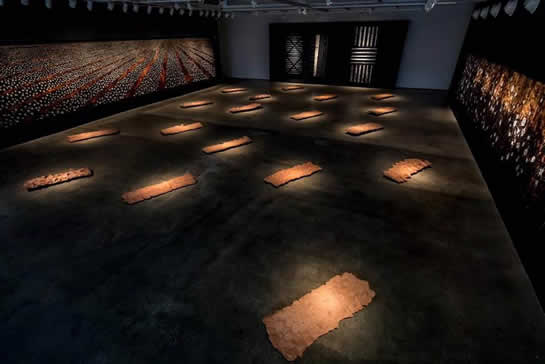 The North Carolina Symphony (NCS), CAM Raleigh, and New Music Raleigh (NMR), under the artistic leadership of Shawn Galvin, collaborate to give the world premiere of the newest work by composer D. J. Sparr, titled …to me from the earth….

Sparr's musical composition, for soprano and a chamber ensemble of eight musicians, is inspired by artist Thomas Sayre's White Gold exhibition, which opened in early October. Both the artwork and the musical composition were commissioned by CAM. This fusion of music, visual art, and poetry will be presented in four performances at CAM, November 10 through 13.

Sayre's site-specific exhibition reflects the cotton industry in the American South, and the artist's respect and reverence for the land and the labor from which the cotton grows. This subject resonated with Sparr, who now lives in the third-largest year-round cotton producing area of the world, in West Texas, and whose music has been influenced by its open landscapes including fields of cotton.

Sparr' musical gestures suggest wide expanses of sound representing earth and sky. The ensemble of eight musicians and soprano is divided into groups and move about the exhibition space. Between an introduction and conclusion, …to me from the earth… is structured in four sections that relate to the four elements of Sayre's visual piece: furrow, field, earth casting, and barn.

The vocal text, sung by the soprano Aundi Marie Moore, is a setting of a poem by David Dominguez, Mi Historia. Sparr was "immediately moved by the poetry" when it was introduced to him by Thomas Sayre and CAM Executive Director Gab Smith.

This world-premiere performance will be led by Shawn Galvin, co-founder of New Music Raleigh, an organization dedicated to the presentation of modern music. "New Music Raleigh is pleased to be a part of this unique collaboration, which merges the sensibilities of the visual and performing arts," says Galvin. "D. J. Sparr has been a long-time NMR collaborative partner, and we are all very excited to bring his next new work to life in the exhibition in Raleigh with musicians of the North Carolina Symphony. Given our past involvement with D. J.'s music, our collective respect for Thomas's work, and the artistry of the Symphony's musicians, this is destined to be a truly special opportunity."

The composer feels an especially personal connection to this project, not just for the subject matter, but also for the close musical friendships he has with several of the performers. "I am very excited to make music with some of my favorite musicians again in Raleigh, a place that has been very kind to my music," says Sparr. "Most importantly, I look forward to being a part of this shared experience with the audience at CAM."

Founded in 1932, the North Carolina Symphony (NCS) is a vital and honored component of North Carolina's cultural life. Its 175 concerts and events annually are greeted with enthusiasm by adults and schoolchildren in more than 90 North Carolina counties throughout the state—in communities large and small, and in concert halls, auditoriums, gymnasiums, restaurants, clubs, and outdoor settings. The Symphony's 66 full-time musicians perform under the artistic leadership of Music Director Grant Llewellyn and Associate Conductor David Glover.

NCS's state headquarter venue is the spectacular Meymandi Concert Hall at the Duke Energy Center for the Performing Arts in downtown Raleigh. The Symphony's service across the state includes series in Chapel Hill, Fayetteville, New Bern, Southern Pines, and Wilmington, as well as Summerfest concerts at the outdoor Koka Booth Amphitheatre in Cary. NCS brings some of the world's greatest artists to North Carolina, including Lang Lang, Stephen Hough, and Augustin Hadelich in the 2016/17 season.

Committed to engaging students across North Carolina, NCS conducts the most extensive education programs of any U.S. orchestra. In alignment with the music curriculum set by the North Carolina Department of Public Instruction, the Symphony provides training and resources for teachers, sends small ensembles into classrooms, and presents full-orchestra Education Concerts experienced by more than 52,000 4th and 5th graders each year. At the middle and high school levels, students have opportunities to work directly with NCS artists and perform for NCS audiences.

NCS is dedicated to giving voice to new art, introducing North Carolina audiences to 20 works by living composers—including two co-commissions—in the past year. In its 83-year history, the Symphony has given 46 U.S. or world premieres. NCS will appear at the John F. Kennedy Center for the Performing Arts in Washington, D.C. in spring 2017, as one of four orchestras chosen for the inaugural year of SHIFT: A Festival of American Orchestras—an honor that recognizes the Symphony's innovative community partnerships and creative programming that inspires increased interest in new music. The Symphony will present works by composers with ties to North Carolina, including Sarah Kirkland Snider, Caroline Shaw, Mason Bates, and Robert Ward.

The first state-supported symphony in the country, NCS is an entity of the North Carolina Department of Natural and Cultural Resources. For more information, visit ncsymphony.org.

NMR was presented the Indies Arts Award in 2013 in recognition for its contributions to the community and commitment to the growth of the arts in Raleigh. NMR's programs are facilitated by its Co-Curators, Shawn Galvin and Karen Strittmatter Galvin, with support from a team of volunteers and through its fiscal sponsor, Fractured Atlas. For more information, visit newmusicraleigh.org.

CAM Raleigh is a non-collecting, contemporary art museum and center of community in the Warehouse District. CAM Raleigh provides the platform for enriching our community and empowering creativity through contemporary art and design. Our ever-changing educational and cultural experiences ignite ideas and connect people to what is now and what is next. CAM Raleigh is funded in part by the City of Raleigh based on the recommendations of the Raleigh Arts Commission. For more information, visit camraleigh.org

Composer and electric guitar soloist D. J. SPARR(b. 1975, Westminster, MD) is one of the preeminent composer-performers of his generation. His eclectic composition style has been described as "pop-Romantic… iridescent and wondrous" (Mercury News) and "suits the boundary erasing spirit of today's new-music world" (The New York Times).

In 2011, Sparr was named one of NPR listener's favorite 100 composers under age 40. D. J. was the Young American Composer-in-Residence with the California Symphony from 2011 to 2014 and was Composer-in-Residence with the Richmond Symphony from 2009 to 2011. His compositions have been commissioned and performed by organizations such as the Houston Grand Opera, North Carolina Opera, and Eighth Blackbird. Recent and upcoming works include Approaching Ali (Washington National Opera), Katrina: Concerto for Jazz Guitar and Orchestra (Arkansas Symphony), and On Behalf: A Metaphor (Tribeca New Music Festival).

D. J. currently lives in the mystical high plains of the Wild West with his wife Kimberly and their dogs Lloyd and Nanette. For more information, visit www.djsparr.com