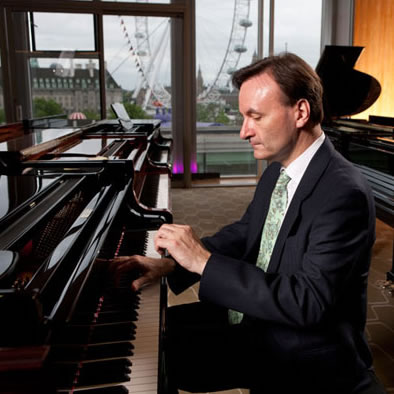 The North Carolina Symphony opened their exciting 2016-2017 concert season in Meymandi Concert Hall with a program of stunning Russian masterworks, full of colorful characters and nimble contrasts. Works by Glinka and Stravinsky brought dashing theatrics together with the late-Romantic passion of Rachmaninoff.

The concert began with Mikhail Glinka's Overture to Ruslan and Ludmila, a delightful romp through the main themes of the fairy-tale opera. This brief but sparkling overture was a clever choice for the concert and season opener, showcasing the ability of the orchestra to rapidly change moods, conveying the opera's different characters. Extremely crisp and swift motives in the strings represented the adventurous character of Ruslan, while a melodious theme in low strings and bassoon showed his more romantic side. It was fascinating to observe conductor Grant Llewellyn during this piece; his articulations and gestures were pinpoint accurate to the characters being portrayed.

Although Rachmaninoff's Piano Concerto No. 1 in F-sharp minor is not programmatic, different characters can still be identified in the music. And who better to bring these characters to life than Rachmaninoff veteran Stephen Hough? There is so much that can be said about his performance. For example, the expression that Hough brought to this concerto was impeccable – the zest and furious energy that is necessary to play the concerto's stormier passages was there, but so was delicate virtuosity. As expected, the balance and exchange with the orchestra throughout the three movements of the concerto was spot-on. Hough's opening chords of the Vivace movement were electrifying, dazzling the audience before the orchestra introduced the first lyrical theme. This theme is reflective yet stormy, with shifting tonalities underneath. The texture throughout the concerto is truly complex, and there is no measure of the piano's music that does not require immense virtuosity.

The middle Andante movement contains an unpredictable piano solo melody that is almost impressionistically bluesy in comparison to the first movement's theme. Nimble and twinkling patterns in the piano's treble range were executed with perfect balance. After a pause, the Allegro Vivace movement begins, and the orchestra wasted no time in returning to the furious-paced textures similar to the first movement. In the third movement perhaps more than the previous two, there are many instances of direct exchange between the orchestra and soloist, this time with a comparatively happier and curiosity-filled melody. The passages leading up to the final phrases of the concerto are wildly passionate and romantic, yet with a disturbed texture lurking underneath. These contrasting characters added even more layers to Hough's performance, and his final phrase was utterly flawless, a phrase that seemed to contain every single key on the piano and left the audience breathless.

The second half of the concert was an engaging excursion through Stravinsky's immersive music. His Circus Polka was first, beginning with a vivacious drum roll and intertwining woodwind melodies, and ending humorously with a bass drum boom. The 1947 revision of Petrouchka was next – an enchanting ballet that tells the story of the unfortunate puppet by the same name.

Each of the four tableaus of the ballet portrays a fascinating scene. The first, "The Shrovetide Fair," is an imagery-filled scene teeming with the life and bustle of the fair. The rippling woodwinds and strings of the orchestra depicted people rushing about, suddenly breaking into a waltz of the puppets in their theater. The middle two tableaus are more creeping and villainous, yet with a reoccurring lyrical flute that was absolutely marvelous. Stravinsky's device called the "Petrouchka Chord" appears, depicting the title character with two extremely dissonant chords (F-sharp and C) played simultaneously. In the second tableau, the piano begins to be featured more as a solo instrument. The third contains increasing amounts of dissonance, building up to be dissipated when the fair imagery returns at the beginning of the fourth tableau. This fourth tableau is a whirlwind, featuring many lesser-used percussion instruments that added color to the myriad themes and constant motion. However, Petrouchka ends rather quietly, on low pizzicato notes in the strings that satisfyingly vanish like a breath.

This performance repeats Saturday, September 24. See our sidebar for details.