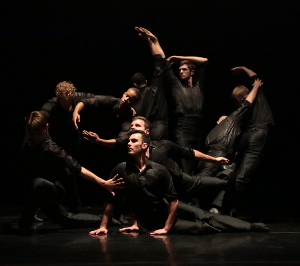 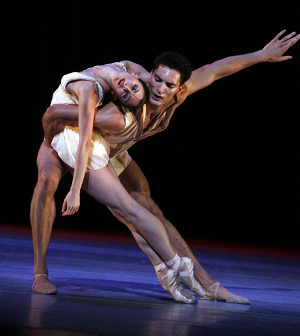 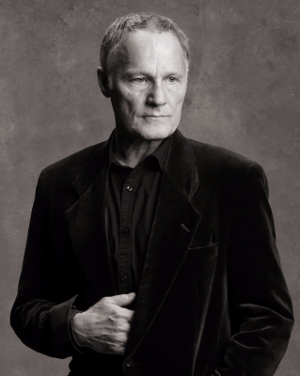 Lar Lubovitch became the latest Scripps/ADF ward winner on July 11. The award, given most years, honors a choreographer for lifetime achievement in dance, and comes with a $50,000 check to back up the pretty words. In a pre-performance ceremony at the Durham Performing Arts Center, Lubovitch was lauded by American Dance Festival director Jodee Nimerichter, and by one of his company members, before giving a graceful speech that pointed up the importance of the ADF to his career in dance.

Lubovitch, now 73, was born in Chicago, and traces of the Windy City of Big Shoulders remain in his work. He grew up in Chicago without seeing dance: He was an art student and gymnast at the University of Iowa when he attended a performance by the José Limón Company. "My life changed between curtain up and the final act," he said last night. After some extensive asking around, he was pointed to the summer program at Connecticut College – that is, to the American Dance Festival in its then-home.

Imagine this: a newly dance-struck boy at his first dance class, 9 a.m. "A witch walked in," he said, describing black hair and tortured feet. " 'And,' she said, then propelled the students through a series of strange moves. I felt my soul swell and soar." After his first class with Martha Graham, he went to the next studio, where Alvin Ailey "attempted to teach us how to move from our hips." After lunch, it was on to class with José Limón. "I learned everything I needed to know about dance that day," said Lubovitch, "from their words and their bodies."

Maybe so, but he has spent the rest of his life perfecting the knowledge. He went on to study at Julliard (where he met Gerri Houlihan, who became one of his first dancers, and who now teaches at ADF and other dance programs), and formed the Lar Lubovitch Dance Company in 1968. He has subsequently choreographed more than 100 dances for his own company, for Broadway, and for ice dancing, and his company has performed in every US state and around the world. In his speech, Lubovitch modestly noted that some weren't all that great, but some were, and some would last through time.

Highly musical, Lubovitch unites his dances with their music – no working against the music, or without it, for him. His tastes are eclectic, ranging from Classical to Glass, and on to newly commissioned music. The program at ADF gave a sample. The first half was comprised of four short works or excerpts from longer works and the second half was given over to one long piece. Presumably, all these offerings are ones Lubovitch considers among his best work.

Certainly, they were all ravishingly beautiful as performed on July 11. The program opened with North Star, 1st movement (1978) set to Philip Glass' "North Star." Nine men circled and wove in the dusk, wandering, searching, crossing, winding, pressing onward with all the certainty with which Lubovitch imbues his movements. In his work everything was big and bold, yet there was room for the delicate detail, the little frisky bits for hands and feet. And the lightness – you never heard the dancers' feet thud on the floor. It was as if, when they jumped, which they did often, they landed without their weight, giving the sensation that only the skin of foot-soles touched earth while the rest of the body hovered above, always ready to fly. I think this is what people mean when they say his work is "rhapsodic."

Scriabin Dances (1977), set to Alexander Scriabin's Etudes numbers 1, 6, and 10 from 12 Etudes, Op. 8, played on stage by pianist Yegor "George" Shevtsov, was danced by Kristen Foote in a flowing metallic bronze slip dress (Reid Bartelme) that closely matched her skin tone. I was undone by this. The union of choreography and music, the extraordinarily refined and powerful dancing, the way the light gleamed on skin and satin, the interaction between dancer and musician – it was all so right and necessary. I can't think of another solo dance that has had such an effect on me.

In a lovely complement to Lubovitch's words about José Limón, whose The Moor's Pavanne formed part of Lubovitch's first experience with modern dance, this program included an excerpt from Lubovitch's own Othello (1997), set to a commissioned score by Elliot Goldenthal. Of course, we saw the final scene, the duet between Othello and Desdemona. Dancers Fabrice Calmels and Victoria Jaiani (appearing courtesy of the Joffrey Ballet) took us far into the tragedy with their exquisite interpretation of the stunning choreography, which turned on a dime when Othello discovered the handkerchief. The complex twinings and lifts that indicate adoration were inverted and torqued into the rage of jealousy before the curtain fell on Othello's endless remorse.

We were rescued from the darkness by the male duet from Concerto Six Twenty-two (1986) set to Mozart's Concerto for Clarinet and Orchestra in A, K. 622, and danced in glowing light in all-white costumes. This is one of Lubovitch's best-known works, and was performed here in 2008. Time had not faded its sublimity, and watching Attila Joey Csiki and Tobin Del Cuore dance, my mind supplied a little Shakespeare to augment the clarinet: "Love's not Time's Fool, though rosy lips and cheeks/Within his bending sickle's compass come;/Love alters not with his brief hours and weeks, /But bears it out even to the edge of doom."

After intermission, it was nine men again, in Men's Stories: A Concerto in Ruin (2000), set to an audio collage by Scott Marshall. Some of what we saw in North Star appeared in this choreography, only supercharged. The men appeared in head to toe graphite and black, with cut-away morning coattails flapping. The dance was like a collage, too, rather than a linear narrative, as it showed different aspects of being male, cunningly couched in gorgeous balletic arrangements typically given to the female dancers. After a while, the coats came off, then the shirt sleeves were rolled up, then the collared shirts were replaced with mesh T-shirts. I was all set for skin next, but the coats went back on before all the Adonises sat, posing and looking about themselves, lordly and ready to be worshipped. It was a knockout, and the curtain had to be lowered to stop the ovations.

In his introduction of Lubovitch during the award ceremony, dancer Jonathan Emanuell Alsberry ("you can call me Jo-Jo") said that Lubovitch "sets the example by celebrating the limitless terrain of artistry." To dance Lubovitch's choreography, he said, "feels so good." It feels so good to watch, too.

The program, minus the inspiring award ceremony repeats July 12, 8 pm. There is much interesting stuff yet to come in the ADF 2016 season, but with the possible exception of the Paul Taylor Company, there will not be any dancing as glorious as this. ("If my work is about anything, it is about dancing," said Lubovitch.) See our sidebar for details.