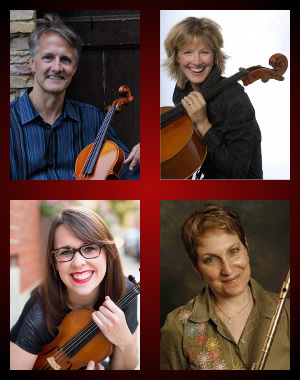 Summer is here, and with it the Ciompi Quartet presents the fifth season of chamber music concerts in the inviting Kirby Horton Hall at the beautiful Sarah P. Duke Gardens. Under the direction of violist Jonathan Bagg, the concert also featured three outstanding and renowned chamber music artists.

Flutist Laura Gilbert has appeared all over the world as chamber musician, soloist and lecturer. Her awards and recognitions include Grammy nominations and an award for her performance on Dawn Upshaw's Girl with the Orange Lips.

Violinist Gabriela Diaz began her studies with her musician parents and went on to graduate with honors from New England Conservatory. A cancer survivor, she is committed to supporting cancer research. She is also a fierce champion of contemporary music.

Canadian cellist Caroline Stinson has been acclaimed for her lyricism, fabulous tone, great technique and innate musicality. She performs widely across North America and Europe as soloist, recitalist and chamber musician.

Bagg chose four pieces from the late Romantic and Contemporary periods under the heading of Light and Shadow II – a sequel to last year's concert with the same title. The first selection on the concert was Paul Ben-Haim's Serenade for flute and string trio (1953). Ben-Haim was a German Jew who was an assistant conductor to Bruno Walter and Hans Knappertsbusch and a much-respected musician in Germany. He immigrated to the then British Mandate of Palestine in 1933, later became a citizen of Israel and was a teacher of numerous outstanding Israeli musicians. His music falls in the category of the Late-Romantic style – lyrical, rhythmically adventurous, and harmonically rich.

The Serenade for flute and string trio is cast in three movements, the first of which is labeled Con moto, quasi allegretto. It begins with a wistful flute solo climaxing with a cascade of sound from all the instruments and then moves into a development section with intricate counterpoint and appealing melodies popping up in repeated patterns and ending with a pizzicato burst.

The second movement, Tranquillamente improvisando, is in a pastoral mood, mostly calm and evocative of a summer evening at twilight and ending quietly. The third movement, Andantino commodo e cantabile, is more animated with an off-beat swing, a passage with the cello plucked in arpeggios to sound quite like a harp under a sweet flute melody followed by a brief mystical passage and a very soft ending. The ensemble sound would lead you to believe these musicians had been playing together for many years. Gilbert's accomplished flute tones often soared above the strings while the violin and viola blended in with artful contrasts. Stinson was notable for the variety of techniques she contributed from smooth lyricism to the strummed harp-like passage.

Ernő Dohnányi is best known for his Variations on a Nursery Tune for Piano and Orchestra, published (as were most of his major works) under the German form of his name, Ernst von Dohnányi. His Serenade Op. 10 for string trio composed in 1904 is set in five movements. The  Marcia is rather heroic with hints of Beethoven, especially at the end of the movement. The Romanza movement features a lovely extended viola solo. The Scherzo is fugal, starting with the violin, then the viola, and the cello joining the spritely chase. The Theme and Variations begins with a homophonically-scored chorale-like passage and proceeds through a series of variations. The Rondo starts calmly and builds up to a lively mazurka that ends with a powerful cadence.

The playing by the three strings had a magical quality to it and of special note was Bagg's warm and sensuous viola solo in the Romanza. The intricate fugal passage of the Scherzo was an accomplishment of brilliance.

David Kirkland Garner is a composer of chamber, orchestral, and electro-acoustic music that often draws on other music as a point of departure. He holds degrees from Duke University, University of Michigan, and Rice University and will begin this fall as Assistant Professor of Composition and Theory at the University of South Carolina. His composition Nonallemande is inspired by and takes off from the first twenty-two notes of the Allamande of Bach's Flute Partita and spins them out in a sort of fantasy. The piece began with a nervous shifting pattern that the writer found reminiscent of Stravinsky's Dumbarton Oaks Concerto. There were flute passages that sounded like snippets of Bach, and there was much give and take between the instruments and an amazing intricate pizzicato ending.

The concert closed with the Flute Quartet by Nicholas Maw. This English composer studied at the Royal Academy of Music in London, then in Paris with Nadia Boulanger. Much of his career was spent in the US. He composed in a variety of genres including chamber, orchestral, choral music, and opera. The Flute Quartet is written in three movements. The first movement, Moderato con moto, opens with the violin presenting an exquisite melody and developing into a variety of rides sometimes mystical in nature, sometimes jaunty, sometimes seeming to float over an unknown landscape. The second movement, Lento, opens with an extraordinary play of harmonics between the three string instruments and develops into a passionate flute solo over tremolo strings in rich harmony. The third movement, Molto vivace, is a happy, vigorous ride. In a fascinating counterpoint passage, it seemed all the instruments were going in different directions. A trio section recalled some of the mysticism of the earlier movement. The music seemed to run out of breath, but then resumed speed with new vigor hastening to a glorious finale.

It is such a joy to hear music like this – challenging, new music that stirs the senses and connects with experiences past and perhaps even experiences yet to be encountered. The performance of these outstanding musicians was with intricate precision, warm lyricism, tight ensemble and communicative musicality. Consult CVNC's website for information about the up-coming concerts in this series.