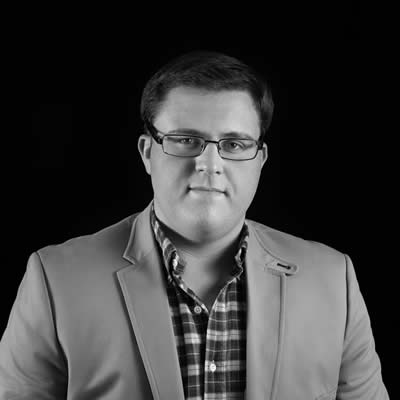 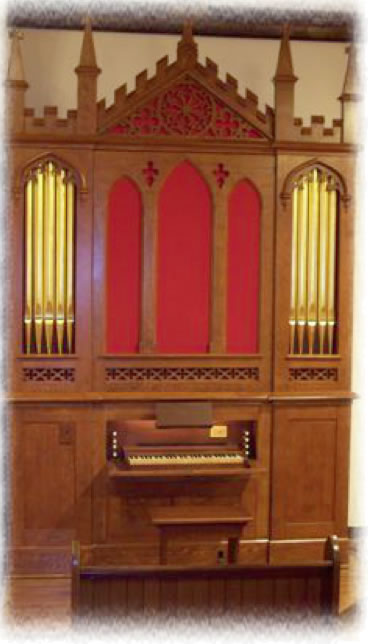 Hertford (pop ~2100), the county seat of Perquimans County (pop. ~11,300), is a delightful North Carolina town. Greatly loved by many of its inhabitants, it is not a very significant place in the big picture of North Carolina, much less in the world of the arts or the world of organ building. However, safe in Holy Trinity Church stands a one-manual organ built by George Jardine, New York, about 1854. At that time, the parish was a very rich agricultural area, with lots of generous parishioners. The organ served the congregation without any major work other than the addition of an electric blower c. 1947 until it was restored in 2008 by J. Allen Farmer, Inc. of Winston-Salem. It continues in regular service.

The instrument is one manual (no pedal division), with a principal chorus of:
Open Diapason 8
Principal 4
Fifteenth 2.

All pipes are contained in a swell box with a hitch down swell pedal, that is, either wide open or completely closed.

Patrick Zelezik, in his search for historical organs, identified the Holy Trinity instrument. He played an interesting program of serious music written for organ keyboard only. The program was logically organized to show the development of organ music in northern and central Germany through J. S. Bach. Keyboard-only pieces tend to be short, making a recital-length program too lengthy to mention every piece by name. The opening piece, a passacaglia by Bernardo Pasquini, started us off right with a taste of the principal chorus. Zipoli's "Al Post Comunio" from his Sonata 7a was a delicious little piece on a soft flute.

Zweelinck's Variations on "Mein junges Leben hat ein End" was of big enough scope for us to appreciate Zelezik's careful use of embellishment and his well-developed ability to bring the printed page to life. It also allowed us to hear the minor musical difficulty inherent in several different treble stops with a common bass. The Stopped Diapason Bass was not a perfect match to the Clariana and Dulciana. Samuel Scheidt's "Bergamasca" was played well up to tempo; the interesting bass phrase at the end exploited the very flexible winding of this little instrument.

Organs of this period and earlier frequently had a winding system that was famously glorified by the late Charles Fisk as "the organ's breath of life," known positively as flexible winding, negatively as unstable winding, and humorously as wiggly wind. With a flexible wind system, playing bass notes while a treble note is being held can cause slight variations in the pitch of the treble note, giving it a more lifelike quality as it reacts to the music as a whole. Buxtehude's variation-form "Auf meinem lieben Gott" (BuxWV 198) further showed off the charm of the Jardine's historic bellows arrangement. In the Toccata in G (BuxWV 165), the amusingly tubby Diapason was well represented, as was the full principal chorus. Zelezik's inspired phrasing in Bach's "Erbarm dich mein, O Herre Gott" (S. 721) was a delight to the ear. Bach's "Du Friedefürst" (S. 1102) and "Allein zu dir" (S. 1100) from the Neumeister Collection discovered in the 1980s, along with the fughetta "Nun komm der Heiden Heiland" (S. 699) were especially good choices to play on the Jardine. Zelezik closed with the Canzona in D minor (S. 588); his strong rhythmic line and expressive phrasing were superlative.

Zelezik did a good work in putting the Jardine through its paces for an appreciative audience (full house) of about 100. His excellent technique and musicality foretell a promising career. I am hopeful that to this talent he can add a little restraint on his spoken comments and let the instrument and the music speak for themselves.