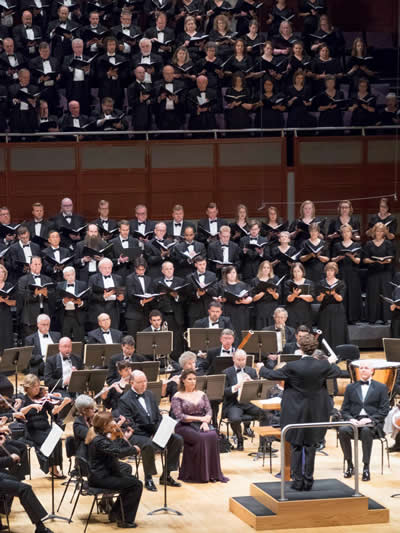 A rarely-performed masterwork by Hector Berlioz? Yes, there is one: his oratorio, L'Enfance du Christ (The Childhood of Christ). Why is hearing this work a rarity? Well, it's not like the great works with which Berlioz is usually associated: his Symphonie Fantastique, with its famous "March to the Scaffold;" his Requiem, with its four extra brass choirs heightening the drama of the Dies irae; his Damnation of Faust; and (you can fill in your own favorites here). Instead, L'Enfance is the anti-Berlioz. There is no heaven-storming bombast; it can be performed without an orchestra of some 90 to 100 players; it's mostly gentle music. As its subject matter is the Massacre of the Holy Innocents and the Holy Family's flight into Egypt, it might naturally be up for performance in the weeks following Christmas; but as a tender work, it lacks the saleability of yet another "holiday pops" concert or the year's 11,500th performance of Handel's Messiah. It has not been heard in Raleigh (so I am told by those who have been musically active here for decades) since 1977.

Thanks to Alfred E. Sturgis, music director of the N.C. Master Chorale, for having the vision and courage to schedule this work and to conduct its beautifully-moving performance. The three-part oratorio (I. Herod's Dream; II. The Flight into Egypt; III. The Arrival at Sais) featured five principal soloists and two lesser roles sung by members of the chorus. Most impressive among the solo voices was baritone Scott MacLeod, singing the role of Herod the Great. MacLeod's clear, resonant voice was strong at both top and bottom of the bass-baritone range, conveying the paranoia of this Judean king with drama, vocal dexterity, and superb musicianship.

Tenor Jason Karn, singing the role of the Narrator, shook off a somewhat-rough start to produce some beautiful sounds, notably in his more quiet passages at the oratorio's close. Soprano Megan Cleaveland took the role of Maria, the mother of Jesus. Appropriately wearing a gown of Marian blue, Cleaveland sang lyrically and musically, both in her solos and in her duets with Joseph (baritone Charles Hyland, filling in for the previously-announced Joshua Conyers). Hers is a voice to be followed as it continues to mature. As the Ishmaelite father whose family shelters Jesus and his parents in Egypt, bass Donald Hartmann's voice was so dark and covered in its sound that it lacked the clarity so important to the French chanson-like quality of this role. Chorus members Reed Altman (tenor) and Mark Parrish (bass) were convincing in their respective roles of the Centurion and Polydorus.

Sturgis' conducting was straight-forward and clear. With no histrionics, he conveyed the music's structure and meaning effectively. The orchestra of 51 and chorus of some 215 voices responded to his gestures with a performance that made one wish that Meymandi Hall had been full to overflowing. From Herod's "mad scene" through the 7/4 rhythm of the "cabalistic movements" of the soothsayers, to the simplicity of the well-known "Shepherds' farewell to the Holy Family" chorus (the first two of its three stanzas sung at a faster tempo than I've heard before), to the absolute beauty of the pianissimo "Amen" which closed the oratorio, was a superb performance. One hopes that it will be repeated before another four decades pass.

In a world of wars and terrorism, in a nation where it seems that every politician running for office promises not to work or represent us, but "FIGHT!" for us, the flamboyant Berlioz's alter ego of gentleness and tranquility reminds us of that beauty which the world can still offer – especially the world of music.