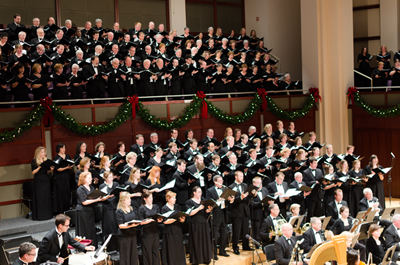 To the large turnout at Meymandi Concert Hall on a foggy evening, there could be little doubt: The Christmas season is upon us. In a program called "Joy of the Season," the North Carolina Master Chorale featured over twenty Yuletide songs, a mix of grand old standbys, and several less familiar masterpieces. These "pros" were ably aided midway in the evening by the Enloe High School Chamber Singers.

Music Director Alfred E. Sturgis introduced the huge choral forces with an arrangement of "O Come All Ye Faithful" by contemporary composer Dan Forrest. That popular musician's distinctive stamp was more clearly heard in the later piece, "He Is Born," based upon a traditional tune and rendered by the twenty-voice Chamber Choir.

"Hodie Christus natus est" (Today Christ is born) by Gabrieli (1555-1612) is certainly one of the more commanding works from the Baroque era. Powerful accompaniment by the chamber orchestra augmented this great piece. Here and throughout, Sturgis was able to conjure up a bit of magic in eliciting crisp precision from these two hundred or so voices.

Certainly a highlight of sorts was reached with "Annunciation of the Shepherds," an exquisite commentary on "Glory to God in the Highest," by Shane Dittmar. This 21-year-old composer, Raleigh native, and student at UNC-Greensboro, was present at the concert. He was treated to enthusiastic and well-deserved audience acclamation.

One enhancing aspect of the program was its Salt Lake City connection. Barlow Bradford, composer and sometime conductor of the Mormon Tabernacle Choir contributed an arrangement of "Joseph Dearest, Joseph Mine," served up splendidly by the Chorale. These same forces later brought on his composition, "Was Not Christ Our Savior." This Mormon Tabernacle connection was more clearly evident in a later new work by Ryan Murphy, who currently works with that choir. Murphy's "A Lullaby," a setting of American writer Eugene Field's heart-rending poem, ended the first half on a bittersweet note. The composer here was evidently influenced by yet another Salt Lake City and Mormon Tabernacle veteran composer, Janice Kapp Perry, whose earlier composition, "A Child's Prayer," could have been his model. The appeal and emotional pull of this lullaby were inescapable with the treble and the low voices alternating to achieve the requisite tenderness. "There is a little one asleep / That does not hear his mother's song…"

Director Ann Huff brought on the fine Enloe High School Chamber Singers after intermission for three numbers. The discipline of these forty singers was most admirable, singing from memory, and with a more mature and higher quality than "should" be expected from such a young group. Their a cappella treatment of "Carol of the Bells" was especially skillful.

The Chorale decided that they should "Sing We Now of Christmas," and they joined Mel Torme to watch "Chestnuts Roasting on an Open Fire." The Chamber Choir brought to life "A Charlie Brown Christmas." Accompanist Susan McClaskey Lohr was the embodiment of widely-celebrated pianist Schroeder. And members of the orchestra provided the vital jazz combo. For total immersion in the true Charlie Brown spirit, all that was lacking was a scrawny little Christmas tree.

Constituting what was possibly the most colossal crew ever assembled on the stage of Meymandi Hall, all forces joined to close the evening with John Rutter's arrangement of "Joy to the World." Could anyone have departed into that dank night without bearing at least a smidgen of the "Joy of the Season"?