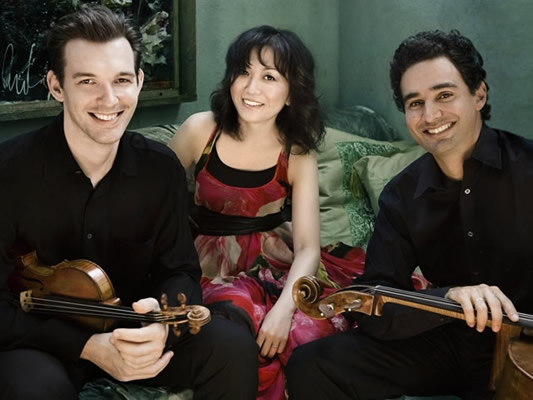 A rainy Sunday afternoon got a little brighter with the sparking music of the Horszowski Trio. Chamber Music Raleigh continued their concert series in Hayes Barton United Methodist Church by hosting this piano trio as the next in an interesting lineup of small chamber ensembles.

The Horszowski Trio consists of Jesse Mills, violin, Raman Ramakrishnan, cello, and Rieko Aizawa, piano. All three boast impressive résumés, but their best recommendation is their sound. With an almost compulsive attention to detail, flawless communication, and impassioned interpretations, this ensemble exemplifies all of the best parts of piano trios (an underrated instrumentation that is often overshadowed, unfortunately, by the omnipresent string quartet).

The program opened with a scintillating rendition of Beethoven's Trio in E-flat, Op. 70, No. 2. All three musicians approached this work with a delicate touch and a strong emphasis on bringing out the sudden dynamic changes that make Beethoven so exciting. The performers were clearly inside each other's music, moving and breathing with each other constantly. At one point, Aizawa repeated a complicated pedaling pattern through one of her rests, matching Mills' melodic line – possibly without her even realizing it. Ramakrishnan's tone was wonderfully warm and rich, and his pizzicato touch projected beautifully without any buzzing or snapping.

Hayes Barton United Methodist Church is a very string-friendly performance space. Sadly, the piano was another story; that particular instrument with acoustics of the room can make for a muddy sound. While this was less of an issue in the Schumann and Tower trios, Aizawa's trademark sparkling clarity was not as evident as it could have been and Beethoven was not shown off to his best advantage.

Following Beethoven's trio, the ensemble presented a contemporary work by Joan Tower, For Daniel. The piece was written for the composer's nephew, who was struggling with a severe lung condition when the work was composed and passed away before the premiere. Towers drew her inspiration for the work from Daniel's fight to breathe and a celebration of his life. The work is emotionally raw and full of the sense of struggling with loss. The underlying panic that accompanies the feeling of not having enough air is present throughout the work, as in the gasping, tense opening motive. The quartet approached this intimidating work with an impassioned expression that sacrificed none of their technical accuracy. The range of timbre they expressed was exceptional, with tinkling, pounding, and shimmering from the piano and whispers, rasps, and singing from the strings. The entire room audibly exhaled at the end of the work, as if they had been holding their breath for the entire fifteen minutes.

After intermission, the trio returned with Schumann's Trio No. 1 in D minor, Op. 63. The work fell a little flat after the exhausting emotional intensity of For Daniel, but the ensemble gave a very pleasing reading nonetheless. The Horszowski Trio does pianissimos very well, playing genuinely soft without losing speed, intensity, or tone. They made a lot of sudden changes in style and dynamics in the last piece. The third movement, Langsam, mit inniger Empfindung – Bewegter (Slow with deep feeling – Moving) was especially tender, impassioned, and sensitive.

If you were not so lucky as to catch the Horszowski Trio this afternoon, Chamber Music Raleigh continues in the spring semester with the Dover Quartet. See our calendar for details.