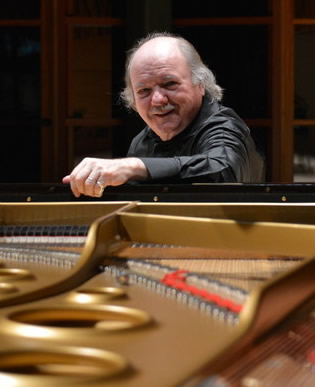 Courtesy of artist and Paderewski Festival

Pianist and teacher John Perry, fewer than two months removed from an 80th Birthday Celebration Recital at Carnegie Hall, brought the second annual Paderewski Festival to a close with a program of superbly-played works of Mozart, Paderewski, Beethoven, and Schubert. This final performance of the festival took place in the auditorium of the North Carolina Museum of Art.

Perry's playing is never flamboyant; he simply sits down at the piano and plays with a quiet stance, his fingers needing no head-shaking, upturned face with closed eyes, or dramatic arm gestures to produce a wide palette of colors from his instrument. He began with Mozart's Sonata in B-flat, K. 333, a sonata unique for having a cadenza built into it. Perhaps Mozart had in mind making it a concerto, but decided he didn't need an orchestra for it. Perry's playing was graceful and sparkling, his tempi just right.

Next came three pieces by Ignacy Jan Paderewski (1860-1941), surely the world's only person to be an internationally famous pianist and the prime minister of his country (Poland). His compositions are not widely known, save for the ubiquitous "Menuet in G" from Humoresques de concert, Op. 14; Perry included this piece, preceding it by Paderewski's Opus 1, the "Menuet in G minor", and the Elegy for Piano, Op. 4. The G minor menuet is really more of a "theme and variations" work, its tonal language ranging from its Baroque-like beginning to its Chopinesque right-hand filigree passages. The elegy also invokes the spirit of Chopin in its melody-with-accompaniment beginning and closing sections, separated by big chordal, hymn-like strains. Unlike the rest of the program that he played from memory, Perry used scores for these works, but only after having to reverse the music rack, which his colleague, pianist and professor Adam Wibrowski, had purposely installed backwards in a performers-only joke. After that light-hearted beginning, Paderewski's three works were given idiomatic treatments that the late master would have enjoyed as much as the audience in the NC Museum of Arts auditorium.

A late sonata by Beethoven followed – his Sonata in A-flat, Op. 110. Perry clearly understands this work intimately, playing it as an extended improvisation. Beethoven's dream-like score flits from one idea to another, from one key to another, like a musical revolving door, his ideas pouring out too fast to be held down. In Perry's hands, the opening "Moderato cantabile molto espressivo" sang, the "Allegro molto" was impetuous, the "Adagio ma non troppo" elegiac. The closing fugue is the Beethoven of the 9th Symphony: after the fugal exposition, the composer suddenly returns to motifs of the earlier movements before we're back in the fugue again – but this time, it's upside-down, its subject inverted. It's no easy task to make sense of this score, but Perry's interpretation succeeded.

Following intermission, the recital concluded with another sontata – this time by Schubert – his Sonata in B-flat, D. 960. As idiomatic of Schubert's music as the Mozart and Beethoven sonatas are of theirs, the four movements of D. 960 were a fit vehicle for Perry's mastery of the piano's sounds. His pedaling produced myriads of color while his control of dynamics brought the delicate pianissimos so evident in the first and third movements and the thundering fortissimos of the concluding Allegro.

The audience of some 100 responded with a standing ovation and shouts of "bravo!"  Perry, after several bows, apologized for not offering an encore because, as he said, "If I play any more, I'll miss my flight!"  One hopes that wider-ranging publicity for the next Paderewski Festival will bring larger audiences to hear the outstanding performances that have characterized the first two years of this event.