Drop Whatever Else You're Doing and Make Tracks to Greensboro: All-French Program Captivates Large Crowd 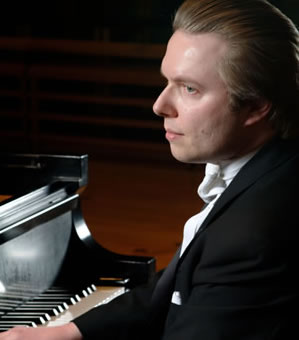 French music is no longer the great rarity it once was hereabouts, particularly during the NC Symphony's long Teutonic period (1983-2003), but all-French programs are still uncommon, so Francophiles within reasonable striking distance of Greensboro would do well to emulate an old friend of our family, whose exhortation may be paraphrased, "Drop whatever else you're doing…" and make tracks to Gate City. This program, presented by the Greensboro Symphony Orchestra and billed "Paris: City of Light," offered outstanding representative works by five leading French composers - Offenbach, Fauré, Ravel, Debussy, and Bizet. It was an audience-friendly evening in that there was nothing too heavy.

The pieces are Carl Binder's Overture to Offenbach's Orpheus in the Underworld (1860) [it's a long story - best to look it up online…], Fauré's "Pavane" in F-sharp minor, Op. 50 (1888) (minus its optional chorus), Ravel's Concerto in G (1931), Debussy's "Prélude à l'après-midi d'un faune"(1894) (after Mallarmé), and a Suite of four numbers arranged by Bizet and Ernest Guirard from the Incidental Music for Alphonse Daudet's 1872 play L'Arlésienne. The soloist in the Ravel was the distinguished American pianist of Russian birth, Ignat Solzhenitsyn, the son of Alexandr Solzhenitsyn. The program was given without intermission but with two somewhat long pauses while the piano was brought up and then returned to the underworld of the War Memorial Auditorium. After a break for chamber music by Ravel - the GSO almost always features its visiting soloists in chamber music between its orchestral evenings - the program will be repeated in Dana Auditorium Saturday evening - for details, see the sidebar. (The GSO's website presents information on the program correctly; the printed program, however, listed Solzhenitsyn as the soloist in both the Ravel and the Bizet and detailed six movements for the latter, although David L. Nelson's notes paralleled what was played.)

The GSO is one of our state's finest orchestras, and it was good to hear it again in its long-time home. The hall looks somewhat drab in comparison with newer venues, and it takes a while to adjust to the sound, which can be a bit remote and lacking in visceral impact. That said, the orchestra looks and sounds very good in the room, with the winds on risers at the back of the platform, the brasses to the left (as one faces the ensemble), and the percussion on the right. Music Director and Conductor Dmitry Sitkovetsky uses a conventional seating plan involving massed violins to the left with the violas outside the cellos, on the right. It's a very wide hall, so there is good aural separation and differentiation. The brasses got carried away a few times, overwhelming the strings (the players of which number 50, in the printed program; the total headcount is 83), but for the most part the balance was exceptionally fine.

The headliners were Sitkovetsky and Solzhenitsyn, and they clearly merited all the fuss the audience made over them, but there was a third star on this occasion, an artist whose superior musicianship helped tie this wonderful evening together. She is flutist Debra Reuter-Pivetta, and again and again, sometimes when one might least have suspected it, her playing came from silence (as an old conductor friend once put it) to command attention by virtue of its warmth and elegance - but always as a committed and integral member of the ensemble. There were other noteworthy solo turns - by the concertmaster, the principal cello, the saxophonist, the harps, etc., but Reuter-Pivetta deserves the brass ring, for sure. (Readers in the Triangle may hear her on February 27 at the NC Museum of Art when she performs as a member of the Fire Pink Trio, which listing we've added to the sidebar, too.)

And finally, a few words on the delightful concert itself. The Overture exuded all the charm of opéra comique at its best. The Fauré is, quite simply, a masterwork of music in tribute to the past. The Ravel was inspired, in part, by the composer's US tour, and the soloist brought an ideal combination of poetry and drama to his performance (comme père, comme fils). The Debussy is a classic concert work (with "Reuter-Pivetta" written all over it) and ballet (presented by two other great Russians who are worth looking up: Nijinsky and Diaghilev). And it was a real treat to hear something by Bizet that wasn't from Carmen. With one exception, the renditions by the orchestra and the guest soloist were as fine as any reasonable music-lover might have had any hope of expecting. (The exception was the harsh entry of the winds in the second movement of the Ravel, when the sound quality and dynamics were badly off.) But, if you love French music, admirably played, this program's for you.

The audience seemed more restless than many, with a lot of latecomers and a good bit of milling about during the performances, but there were a large number of young people, and that tends to make little disruptions almost okay. Scouts were on hand, in uniform, handing out programs; they also paraded the colors (but there were no anthems). A Girl Scout presented a huge bouquet of flowers - it was almost as big as she - to Solzhenitsyn - and then turned to curtsey to the audience. 'Twas charming. And it would be worth a long drive to hear the repeat of this program on Saturday evening!

A brief conversation with Sitkovetsky and Solzhenitsyn was held downstage following the concert; they discussed Russian and American musical training, among other things, and took a few questions from the audience.