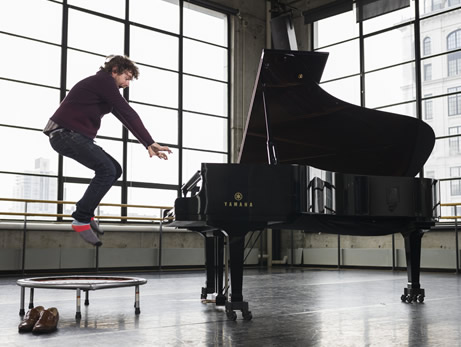 The father and son team of Jeffrey and Gabriel Kahane joined forces with the North Carolina Symphony to perform a program that creatively traced roots and influences of popular American music. The concert began with the early jazz influences of Ravel and Gershwin and ended with Gabriel Kahane's compositional interpretations of these musical influences as viewed through the historical lens of American history. Overall, it was a fascinating and varied program. Jeffrey Kahane, known as a diverse artist, has gained international renown as both a piano soloist and conductor. His son Gabriel, emerging from his father's shadow, has built an impressive career as a recording artist and composer of musical theatre, song cycles, chamber music, and more. Together with the NSC, the two produced an engaging concert.

It is rather unusual for a piano concerto soloist also to conduct the accompanying orchestra, but that is what Jeffrey Kahane did with Ravel's Piano Concerto in G. The lidless piano was turnedso that Kahane faced the orchestra; he conducted with both his body and hand gestures when possible. This Ravel concerto was programmed to demonstrate the threads of American jazz that appeared – somewhat surprisingly – in the composition of a French composer.

The first movement is airy and open, punctuated by syncopated percussion. There are plenty of virtuosic piano cadenzas throughout, played expertly by Kahane. This movement also contains hints of ragtime rhythm before moving on to the more languid and lullaby-like second movement – the Adagio assai. Jazz-like dissonance is hinted, alongside conventional harmonies. Then, the third (Presto) movement returns to the wild motion that began in the first movement. Elements of humor appear in a variety of percussion and trombone slides. During the Presto, Kahane often stood up to conduct and bring certain instruments in during breaks from the piano. This style may sound difficult to follow for the orchestra, but Kahane's communication seemed effortless and produced a solid and unified results.

Next on the program was the world premiere of Gabriel Kahane's work "Hard-Circus Road," commissioned by the NCS. This piece is specific to North Carolina, referencing familiar places and cities while reflecting on the life of the "touring musician."* The instruments of the orchestra were integrated with the quietly passionate, heartfelt melody sung by Gabriel Kahane. Most of the time, the texture was intimate, with voice and one other instrument, such as the banjo.

Then, the Kahanes returned to the jazz influences of Gershwin, performing an integrated set of well-loved Gershwin songs. For this set, two pianos were nested downstage. The younger Kahane provided vocals and piano accompaniment, while his father played some additional accompaniment as well as transitions between each song to make a seamless performance. Particularly notable was Jeffrey's improvised transition between "Isn't it a Pity?" and "Someone to Watch Over Me," where he played a fantastic piano rendition of the classic "I Got Rhythm."

Gabriel's Guide to the 48 States was the second half of the concert. This work is a song cycle and recent composition by Gabriel Kahane, described as having an "edgy but populist pan-American orchestral sound." It blends American history in the form of texts from The American Guide Series with song and orchestral music. These texts, originating from the Federal Writers' Project of the Works Progress Administration in the 1930s, are combined with prose by Harry Hopkins. For the most part, the FWP texts are spoken and Hopkins' texts are sung.

Perhaps the most impressive things about this song cycle are that it is performed without pause and the soloist must become a storyteller of multiple settings and moods. Jeffrey Kahane conducted, and Gabriel was both singer and instrumentalist, playing the electric guitar and banjo alternatively.

Overall, many textures, styles, and genres were represented, characterizing the varied influences on American music in the 20th century. In general, the orchestra provided descriptive and sometimes literal imagery to match the spoken or sung words. Between descriptive snapshots of specific places were "motor tours," signified by locomotive and percussive texture in the orchestra. Gabriel's vocal style ranged from Americana folk music to jazz to contemporary style and more, depicting texts in both first person and third person.

The music of the orchestra shone the most beautifully when depicting landscapes, such as in the movement "Physical Setting," depicting the Pacific Northwest. In contrast, the "Chicago" movement described an urban landscape with constant motion and dissonant textures as well as obvious jazz influences. Although the text itself was somewhat abstract and a bit jarring at times, the words, music, and musicians worked together to create an immersive experience for the audience. Made even more poignant by the father-son team, Gabriel's Guide to the 48 States united the musical influences of American musical history.

*Hard Circus Road is the autobiographical account by Benjamin and Maxine Swalin of the NCS' formative years from just betore WWII to 1972.

Note: This program will be repeated in  Chapel Hill on Oct. 26. For details, see the sidebar.