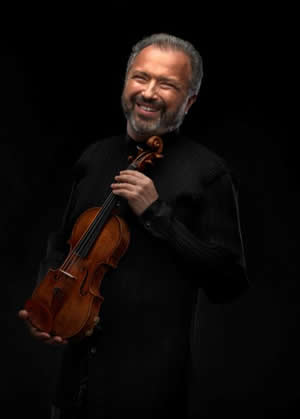 The iconic set of 32 varied pieces, each 32 measures long (64 measures counting the repeats), known as the Goldberg Variations, is the sublime musical creation of one of the most fertile musical minds of all time – Johann Sebastian Bach. Originally written to be played on the harpsichord by a certain Johann Gottlieb Goldberg, a musician in the court of the Russian Ambassador to Saxony, the variations are often played (with difficulty) on the piano, instead of the two-tiered harpsichord, which permits the hands to cross each other with ease.

I was particularly pleased to learn that the variations had been rescored for string instruments whose drawn bows permit long notes to be heard expressively as compared to the plucked or hammered notes on harpsichord or piano, which start immediately to fade ("decay" in music-speech), and being therefore, "remembered" more than heard. Greensboro Symphony Music Director Dmitry Sitkovetsky undertook to transcribe the entire set of variations for string trio in 1984, shortly after the death of Glenn Gould, to whose memory the transcription is dedicated. Immediately, the trio version became successful, leading the way for a version for string orchestra completed by Maestro Sitkovetsky in 1992. The string orchestra version presents different problems for the arranger, because with divided violins (I and II), violas and cellos (reinforced an octave below by double bass) one now has to deal with four parts, whereas much of the original keyboard version is in only three parts.

Nonetheless, Sitkovetsky overcame the challenge and presented us with a new and enlightening glimpse into the possibilities of the Variations. The fine musicians from the Greensboro Symphony string section were led by Maestro Sitkovetsky with his bow and included a new line-up of principal players, headed up by Concertmistress, Dr. Marjorie Bagley, whom Triad music-lovers may remember from her performances of Sarasate's Carmen Fantasy as a 12-year-old virtuoso. The concert took place in the University of North Carolina at Greensboro's School of Music, Theater and Dance Recital Hall and was attended by an enthusiastic full house.

The sustained quality of the strings allow some variations to be played more slowly and more expressively than on the keyboard. For example, the 15th Variation (the first in a minor mode) is an inverted canon at the fifth, (the second voice enters at an interval of a fifth above the first and plays the same tune, but upside down). Already in a somber mood, in the hands of the string-players it becomes a sublime moment of introspection and meditation!

This was followed immediately by the full ensemble playing a French overture and fugue with the strength of the four Orchestral Suites, starting the second half of the opus. Another exquisite moment which pointed out the unique character of the string orchestra was the 19th variation in which most of the shorter notes were plucked (pizzicato) very near the bridge giving us the equivalent of the "lute stop" on the harpsichord, while bowed strings played peacefully sustained harmonies.

I never cease to wonder how such works of profound beauty can still adhere to the strictest rules of counterpoint and to the boundaries of prescribed form. These 32 variations all use the same bass line (with adornments) and all contain the same number of measures. Yet they are varied in mood and nature, and every third variation is a strict canon with the second voice each time entering at a higher degree of separation, e.g. the first canon is at the unison, the second at the second degree of the scale, the third at the interval of a third, etc.

The constant striving to balance content and form informs mankind's greatest creations from architecture to mathematics and from philosophy to zoology. Stated otherwise, shape must fit context and context must permit shape. Composers through the centuries have complied and wrestled with this tension of freedom vs. rules, some adhering to the rules and overcoming them with creativity (Bach, Mendelssohn, Brahms) and some creating new rules (Beethoven, Berlioz, Wagner, Mussorgsky, Schönberg) and of course, all of them creating masterpieces in the process.