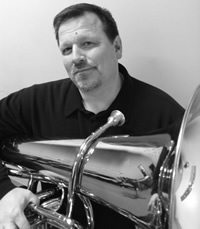 This preview has been provided by the Triangle Brass Band.

The Triangle Brass Band, under the direction of Tony Granados, presents "Dreams, Fantasies and Prophecies" on Friday, October 9, 2015 at 8:00 PM in the theatre at the Cary Arts Center in Cary, NC.

"The stuff that dreams are made of…," "living in a fantasy world…," "the gift of prophecy…" are phrases that paint visions of a better world, or a happier life. And how better to express these visions than through music? Join the Triangle Brass Band and special guest artist, Mark Norman, tuba (University of North Carolina School of the Arts), as they present this heart-warming concert, which features the world premiere of Barbara York's "Prophecies," as arranged for tuba solo with brass band.

Tickets are available through the Cary Arts Center Box Office or by visiting http://www.etix.com/ticket/v/8087/cary-arts-center. Call 919-238-9108 for information or visit our web page at http://www.trianglebrass.org.

About the Triangle Brass Band:

The Triangle Brass Band, under the direction of Tony Granados, Artistic Director, is a group of brass and percussion performers drawn from the Research Triangle Park area of North Carolina. Members of the band are selected by audition and come from a variety of careers, including school band directors, college faculty, lawyers, computer programmers, engineers, medical personnel, and general contractors. The Band was created in 1986 as a joint venture of the A.J. Fletcher Foundation and Capitol Broadcasting of Raleigh, North Carolina. Since 1989, the Triangle Brass Band has sustained itself as a non-profit, educational 501(c)(3) organization.

The repertoire of the band is drawn primarily from the finest original works for brass band from the 19th century to the present. It also includes arrangements of well-known orchestral and wind band works, British folk songs, American patriotic tunes and marches, and Salvation Army hymns. In its history, the Triangle Brass Band has performed at many distinguished conference and festival venues including the North Carolina Music Educators Association Conference, the New York Brass Conference, the Southern Music Festival, the Great American Brass Band Festival, and the North American Brass Band Association Competitions.