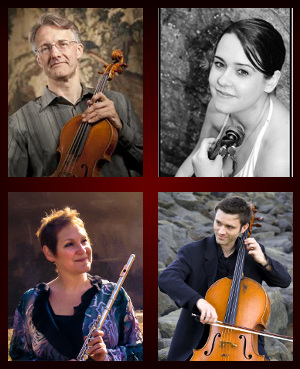 The Ciompi Quartet presented a concert titled "Light and Shadows" at the cozy Kirby Horton Hall at the Sarah P. Duke Gardens. The musicians included violist Jonathan Bagg of the Ciompi Quartet and Duke University, violinist Gabriela Diaz whose musical interests embrace contemporary music and the healing power of music, cellist Robert Burkhart who holds a deep commitment and mastery of the standard cello repertoire along with a passion for new music, and flutist Laura Gilbert who has appeared around the world as a chamber musician, soloist, recitalist and guest lecturer.

The program opened with Mozart's Quartet for Flute and Strings in D, K.285. Composed in 1777, it is the first of three quartets written for the amateur Ferdinand De Jean. The first movement, Allegro, is the longest and most developed of the three movements. It is filled with the charming lyricism that is the earmark of Mozart's gift. Beethoven borrowed from this movement for his Duo for Clarinet and Bassoon of 1792. The flute was mostly in the forefront with the strings accompanying, commenting, conversing and joining in. The movement ends with an interesting, somewhat dramatic coda.

The brief Adagio is a romantic troubadour song which may have become the seed for the slow movement of the piano concerto in A (K.488). The piece concluded with an exuberant Rondo and refrain that was sheer delight. The performance was characterized by delicate interwoven and beautifully balanced playing.

Next on the program, Duke professor, Stephen Jaffe's Figure – Ground (2015) was heard in its premier public performance. It is a rearrangement of Three Figures and a Ground (144-40170) which was composed in the 80s. In its present form it consists of two movements: "Figure," and "Introduction and the Ground." The piece is characterized by intense harmonies, luminescent figures and unpredictable rhythms. It was a vivid and refreshing listening experience performed masterfully by the chamber musicians who seemed quite comfortably at home with such music.

Gunther Schuller (1925-2015), who died recently in his 90th year, is a unique voice in American classical music of the 20th century. His accomplishments in both classical and jazz, as a composer, performer, historian and educator are simply astonishing.

On the program of this concert was his Aphorisms, composed for the centenary of Carleton College and also bearing a memorial dedication to George Edwin Black, a Carleton graduate, who was killed in action during World War II. It is in five concise movements, varying in mood, hence the title Aphorisms.

The first movement, marked Lento, is in a fragmented texture. A refrain appears at the beginning, middle and end. The second movement, Agitato, is just that, but light and humorous in character. Marvelous violin and viola dialogues are pitted against a repeated flute pattern on a single pitch. The next movement is the one singled out as the memorial for George Black and is subtitled "Epitaphs."

The final two movements have no titles attached. The fourth is a cantilena movement featuring the flute. The violin (muted) joins in a dialogue in the middle of the movement. Flute and violin use complementary 6-note pitch material with both parts combining into 12-tone complexes. Viola and cello play a strummed chord at the mid-point and at the final cadence. It was a very interesting movement and Gilbert's mastery of her instrument was astonishing.

The final movement is a lively dance-like piece involving virtuoso performances by all. It ends as all four instruments compete with each other in violent cadenza passages in the upper registers. It was a musical journey of thrilling proportions.

The program closed with "Light Screens" by Andrew Norman (b.1979). It was inspired by Frank Lloyd Wright's stained glass window designs, which he termed "light screens." These designs use simple shapes like the square and the rhombus in repetitive patterns, and they often feature a lively dynamic of asymmetry between areas of intense geometric activity and expanses of largely empty space. The single movement of the piece is marked "With energy."

The subtle differences of the three contemporary American composers, contrasted with the classical eloquence of Mozart provided a lively, diverse and refreshing excursion on this hot summer evening. The outstanding musicianship and insightful interpretive skills of these gifted musicians was greatly appreciated.

A note in the program informs that the third concert in this Ciompi Quartet Presents series, scheduled for Wednesday, August 12, is "Sold out, some tickets may be available at the door on the night of the concert."