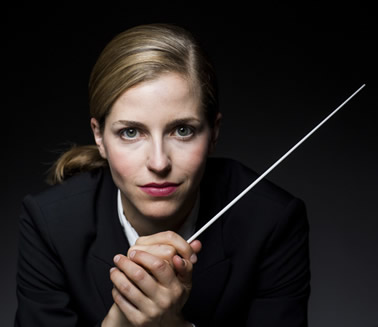 Conductor Karina Canellakis again led the NC Symphony, in the second of a pair of concerts of Russian music, part of the Rex Healthcare Summerfest 2015 concert series at the Town of Cary's Koka Booth Amphitheatre. Former Mayor Booth, his successors in office, and Symphony President Sandi Macdonald were on stage before the music began, giving brief remarks observing the 30th anniversary of NC Symphony summer concerts on the Cary site and the 15th anniversary of the opening of the amphitheatre which is the orchestra's official "summer home."

The predicted wave of heat and humidity had its effect early on, as the concert's opening was delayed; when the announcer brought on the conductor, there was no mention of pianist Sean Chen.  Chen, who followed Canellakis on stage, sat down at the piano, and began the succession of chords which open the Concerto No. 2 in C minor of Sergei Rachmaninoff with such quiet intensity that it caught the sound operator off-guard; the first chord was all but inaudible because the piano's microphone wasn’t turned on. (The venue is dependent on amplification for all performing ensembles; lacking an effective shell, most sounds made on the stage do not carry far enough to survive even halfway through the listening area without the aid of amplifiers and speakers.) The grand piano's sound is not aided by the speaker system, coming out thinner and more percussive than it sounds naturally.

In the second movement Adagio sostenuto, Chen's arpeggios blended with Rachmaninov's wonderfully-Romantic melodies, taking his own turns with those melodies when the orchestra took up the arpeggio figurations. He overcame the acoustic handicap as he wove beautifully-singing piano lines through the orchestral fabric. The audience was totally hushed as the final chords sounded; only the resident birds voiced their own quiet approval from their nests in the surrounding trees.

Canellakis' sensitive accompaniment kept orchestra and pianist together in the give-and-take of the final movement's journey between familiar melodies and heaven-storming bravura passages. Chen obviously felt free to employ considerable rubato, trusting Canellakis to bring the orchestra with him. Yes, the heat index and the humidity were high, but the performance's own heat dispelled nature's as it brought well-deserved shouts of "bravo!" from the large crowd.

Proceeding without intermission, allowing just enough time to remove the piano from the stage, the orchestra continued with the evening's second and final offering, Nikolai Rimsky-Korsakov's "Scheherazade."

The lack of program notes for the orchestra's Summerfest concerts is a deficiency that should be corrected. One cannot expect the entire audience to know that the opening theme of this programmatic music represents the Sultan (of the One Thousand and One Nights fable) and that the poignant melody which follows (played exquisitely by Associate Concertmaster Dovid Friedlander) represents Scheherazade herself, telling the stories that saved her life. Indeed, the composer himself wrote a program note for the work's premiere performance that outlines the story.

Wisps of pink cloud lacing the blue sky brought nature's colors to augment the opening Largo's soulful solo violin passages and their flute echoes. In many ways, the four movements of this most popular of Rimsky-Korsakov's works constitute a "concerto for orchestra," featuring solo passages for several instruments. In addition to Friedlander, who had the heaviest assignment as the Sultana spins out her stories, we heard fine playing by Bonnie Thron (Principal Cello), Mary Boone (Assistant Principal Flute), Samuel Almaguer (Acting Principal Clarinet), and John Pederson (Principal Bassoon).

If the third movement, Andantino quasi allegretto, lost impetus at times, the tempo was revived for the concluding Allegro molto, which showed the ensemble at its best. The quiet conclusion (Scheherazade finally able to have a good night's sleep, free from the threat of death) brought a peaceful end to an evening of wonderful music-making which was a credit to conductor Canellakis, pianist Chen, and, most of all, to the North Carolina Symphony.