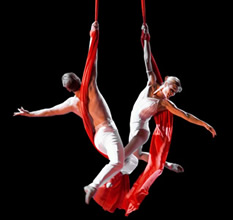 Courtesy the artist and the GSO

The closing of War Memorial Auditorium and the subsequent juggling of halls and dates has given the Directors of the Greensboro Symphony opportunities to be creative and innovative. By engaging the now well-known Cirque de la Symphonie to perform in the gigantic Greensboro Coliseum, the GSO was able to appeal to both the Masterworks' and Pops' audiences at once. This was musical entertainment at its best, with up-beat familiar classics, on the big screen as well as on stage, combined with amazing feats of acrobatics and gymnastics. Originally scheduled for only Saturday night, popular demand caused the Symphony to add a Sunday matinee performance. I heartily encourage parents to bring children to this super program!

Two longer orchestral works were interspersed in the program as well as a couple of breakneck barn-burners, Glinka's perilous Overture to Russlan and Ludmilla and Smetana's "Dance of the Comedians" from The Bartered Bride, with its interminable repeats. Conducted by GSO Music Director, Dmitri Sitkovetsky, the concert opened with a rousing performance of Dvořák's "Carnival Overture," Op. 92 which gave us a chance to acclimatize ourselves to the acoustics of the Coliseum. Later in the program, we were treated to the fourth movement of Rimsky-Korsakov's Scheherazade, Op. 35, in which we were able to appreciate the finesse of concertmaster John Fadial in the violin solo which provides the common thread of the work.

But we were not there just to listen, but to watch and to strain vicariously as the artists of the Cirque performed their amazing feats aloft or on the ground, while spinning hoops or being spun within a hoop. Amazing moments occur when a glowing red top is spun on a string to the music of the Candide Overture of Bernstein – pay attention to the shadows on the fringes of the stage! The moment when Peter Pan takes flight and actually flies over the orchestra while it plays excerpts from Hook (John Williams) is breathtaking.

The costume changes to the music of Tico tico no fubà (Abreu) were magical, and the bounced juggling to the Overture to Candide (Bernstein) was astounding. But the most astonishing was the closing duo of aerial artists riding red silk scarves up to the rafters of the Coliseum to the tune of the famous Waltz from Swan Lake by Tchaikovsky.

Great use was made of three television cameras (one discretely on stage) to show close-ups of the musicians. Almost undetectable was the tiny time lapse which sometimes made the strings look as though they were bowing the rapid passages backwards! But the use of the screen was otherwise very effective.

One cannot talk of the Coliseum as a concert hall – without walls or ceiling to rebound and mix the sounds, adequate acoustics are impossible. So the entire orchestra was amplified and, compared to a concert hall, sounded distant and opaque. But the music is not the only reason we had come – we were there for the spectacular and exhilarating combinations of strength, agility and balance the Cirque brought to the less obvious but equally exhilarating strength, agility and balance of the Greensboro Symphony.