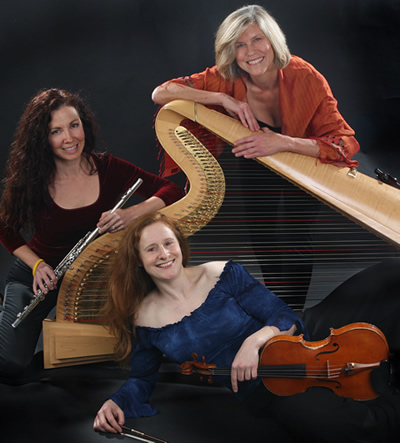 The fire pink (Silene virginica) is one of the more splendid representatives of the eastern wildflower family. So the members of the Fire Pink Trio have set for themselves a high bar. It is fortunate that flutist Debra Reuter-Pivetta, violist Sheila Browne, and harpist Jacquelyn Bartlett, all accomplished musicians in their own right, are up to this fire pink challenge.

At the North Carolina Museum of Art they complemented the most resplendent Sunday afternoon of the pre-spring. A presentation of the Raleigh Chamber Music Guild, the program was called "The Goddess in Every Woman." From the printed brochure: "In honor of International Women's Day, this concert [employs] compositions by women … to explore expressions of female power and divinity."

That female power was on display in the opening "Doppler Effect," an imaginative programmatic composition by Adrienne Albert (b.1941). The work explored the Doppler phenomenon of sound variations when the hearer and the sound source move relative to each other. It applied a soothing musical patina over the raucous noise of a typical cityscape.

Less of the power was on display in "The Garden of Joys and Sorrows" by the Russian composer Sofia Gubaidulina (b.1931). It never bodes well when the composer specifies how the instruments are to be "prepared," here enabling the viola to evoke Joy and the flute to show Sorrow. The minimalist piece closed with a spoken German-language postscript by the violist, said postscript approximately as musical as any other part of the work.

The "divinity" dimension arrived with "Rebirth of the Goddess" by Carolyn Waters Broe (b.1957), and also with Scénes de la forêt (Forest Scenes) by the French composer Mélanie Bonis (1858-1937). The former piece has been referred to as "Southwest Impressionism," reflecting the composer's California and Arizona roots. It depicts the rebirth of the land after a disastrous drought.

Mélanie Bonis tried to compensate for anti-woman bigotry of the era by using the pen-name Mel Bonis. She was a student of Franck and a classmate of Debussy. Her Forest Scenes is so "Debussy-esque" that it could easily pass as having been composed by her more famous classmate. The four movements of this graceful piece comprise the dreamy Nocturne, the sprightly "A l'aube" (dawn), the song-like Invocation, and the elevated "Pour Artémis." This last movement refers to the Greek goddess of the moon, wild animals, and hunting, often identified with the Roman Diana.

The players closed with yet another programmatic work, "From the Song of Amergin," by Welsh composer Hilary Tann (b.1947), wherein the harp is the wind over a lake, the viola is a teardrop from the sun, and the flute is a soaring hawk.