Triangle Brass Band Sets Partnership with Youth – Minus the Youth 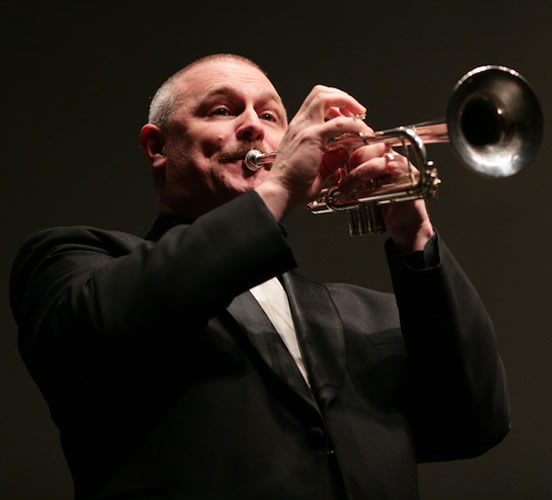 How could a “Partnership with Youth” manage to exclude any actual young people? Mother Nature is the culprit here. The original laudable plan of the Triangle Brass Band was to collaborate with the Leesville Road High School Symphonic Band for a concert with the combined forces at the school. But the recent polar unpleasantness and the consequent school closings put a damper on that well-laid plan. So nearby Tabernacle Baptist Church graciously provided their grand sanctuary for a concert by the “pros” alone.

Artistic Director Tony Granados chose to lead off with the stately and martial “Earl of Oxford’s March” by William Byrd. After this great opener it was time to introduce the evening’s honored guest, cornet/piccolo trumpet soloist Terry Everson, recitalist and educator, a list of whose credentials is long indeed. He was featured here in English composer Martin Ellerby’s Cornet Concerto. His facility with the cornet was immediately obvious as he negotiated the gymnastics of the Brillante movement. In the Aria, he was able to coax some of the most melodious strains ever heard from a wind instrument. Later he employed the trumpet to reprise that same skill in the brief “Escapade” by Joseph Turrin, projecting virtuosity with never a strident moment.

Leesville Road’s own Alyssa Montgomery led the players in an arrangement of Hugh Robertson’s wonderful old anthem, “All in the April Evening.” This piece sounded “just right” in a fine sanctuary and with this loving treatment. May such performances hasten its return to the repertory of church choirs everywhere. “…April airs were abroad / The sheep with their lambs passed me by on the road.”

“Harrison’s Dream,” by the Scottish composer Peter Graham was a key offering of the evening. This programmatic, stormy and rhythmically complex work taxed the considerable abilities of these players. London native Philip Sparke is a friend and former guest of the band. His charming Malvern Suite smacks of English folk songs. The late American composer Karl King contributed his well-named “Melody Shop,” and all-purpose composer Eric Whitacre's “Sleep” is reminiscent of his many excellent choral pieces.

The brass band version of the Finale from Tchaikovsky’s Symphony No. 2 ("Little Russian") provided a satisfying finale to the evening.

This same program is scheduled for Saturday, February 21, at the Cary Arts Center, for details of which, see the sidebar.

Had the Leesville Road players been able to appear, they would have performed works by such worthies as Robert Russell Bennett, Percy Grainger, and the aforementioned Eric Whitacre, doubtless to a level of competence that would have masked their youth. It is unfortunate that this partnership could not come to pass. Maybe next year....