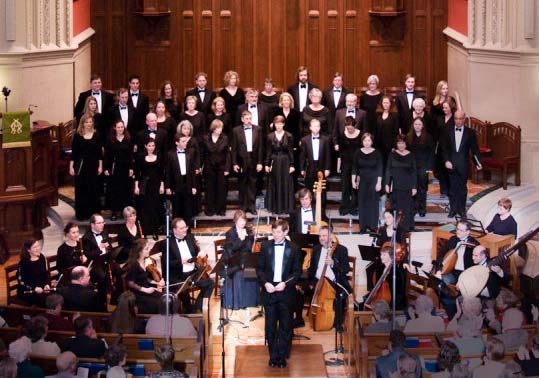 The program is Sunday, February 22 at 3:00 pm at the First Presbyterian Church in downtown Durham. This concert marks the fifth collaboration of Mallarmé and the Choral Society of Durham’s Chamber Choir since 2009.

French Baroque music is defined by its elegance in form and style. The style originated in the French court; most notably in Versaille with Louis XIV and his composer, Jean-Baptiste Lully (1632-1687). Lully’s music was grand in stature and ornate, reflecting the architecture of the Versaille palace. He used lively popular dance musical forms, replacing slow and stately dances that had traditionally been performed in the court.

The Mallarmé HIP players will present the Concerto Comique No. 25 “Les Sauvages” by Michel Corrette, a series of works intended to be performed at the intermission of outdoor performances of Opéra Comiques. Each movement of the Concerto comiques was based on popular songs of the day; in this case the tune in the first movement titled “Les Sauvages” was written by English composer Henry Purcell in his opera Danse des Deux Indiens de la Louisiane (Dance of Two Indians of Lousiana) in 1725. It was later used by Jean-Philippe Rameau in a harpsichord suite and on the Danse du Calumet de la Paix (Dance of the Peace Pipe) in Les Indes Galantes.

Mallarmé will be joined by Rodney Wynkoop and the Choral Society of Durham’s Chamber Choir in two works: Jean-Philippe Rameau’s Motet Quam dilecta and Michel Gilles Requiem. Rameau (1683–1764) was a leader of French baroque music following in the footsteps of Lully, with a large body of cutting-edge work, including many operas. Gilles was a little-known composer who during his short life (1668-1705) was best known for his Requiem. Unfortunately he never heard the piece, as the work was first performed at Gilles own funeral (the original commissioner decided it was too expensive to perform) but it was so well-regarded that it was subsequently performed at many notable funerals including Rameau’s in 1764.

The Mallarmé musicians will be performing on instruments or replicas of instruments from 17th and 18th centuries. String players will play on gut strings and use short bows that have an outward bend, in contrast to modern bows that have an inward bend. Flutes will have no keys, just holes bored into the instrument, much like a recorder. The entire pitch of the ensemble will be lower with the tuning of the A=415 Hz instead of the modern A=440 Hz. Baroque music is almost always accompanied with a continuo: a group of keyboard and bass instruments that anchor the rhythm of the music. The February 22 concert will include a continuo of cello, violone, harpsichord, baroque organ and a theorbo which is a large lute.

For more information about the program and baroque historical performance style, please go to the Mallarmé website www.mallarmemusic.org

The Choral Society of Durham, led by Rodney Wynkoop, has a long-standing reputation for excellence in performing great choral literature with professional orchestra and regionally and nationally known soloists. With an adventurous and varied repertoire ranging from the Renaissance to the 21st century, the Choral Society has attracted enthusiastic audiences since 1949.