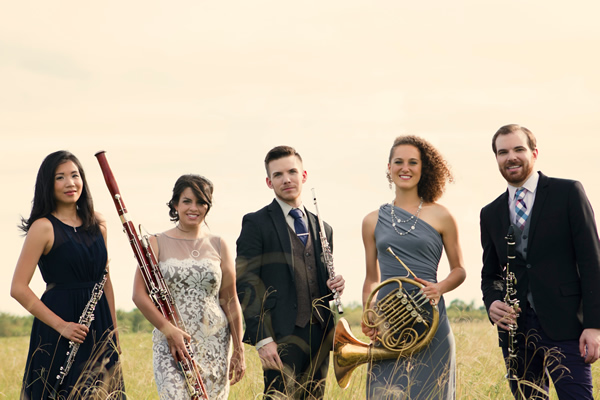 WindSync, the woodwind quintet comprised of hotshot young players on a mission to bring new repertory to its audiences – lots of new repertory – made its local debut on a radiant winter afternoon at Raleigh's Hayes Barton United Methodist Church. The sanctuary is as stunning to view as the ensemble was to hear. The reasonably well-attended concert was part of the Raleigh Chamber Music Guild's ongoing Masters Series.

Among the ensemble's many notable projects is an anti-bullying campaign. Click here for details.

Wind (and brass) ensembles face tough challenges with mainline chamber music enthusiasts who persist in the belief that the genre means string quartets and not much else. And there's somewhat less original music for these groups to play, since these groups don't have the centuries-long histories of the string folks. There is original repertory for wind quintet, but WindSync is not alone in finding it limiting. As a result, the group (and others like it) often turn to arrangements and transcriptions of music originally intended for other kinds of ensembles, be they string quartets or orchestral pieces or even jazz or folk music. That of course further confounds some purists. You'd think that by now, most of us would have gotten over our antipathy to these new takes on older tunes. For sure, WindSync is doing its level best to convince its audiences that what they are doing represents a new future. (The concept was previewed here.)

They play standing up, which is not all that unusual, and completely from memory, which is astounding, and they've successfully solved one of the wind world's greatest environmental issues, which is to say the challenge of waste water management: there were no visible runs, drips, or other "errors" from these artists, not one blot, wipe, or blow-through, and no perceptible splats. Can a diet of silica gel or other desiccants be the key to this phenomenon?

The members are Garret Hudson, flute, and Erin Tsai, oboe, both of whom hail (directly or indirectly) from Canada, plus Jack Marquardt, clarinet, Tracy Jacobson, bassoon, and Anni Hochhalter, French horn. They've all had their tickets punched (to borrow a phrase) in all the right places. Our conservatories are turning (some might say "churning") out technical wizards at record paces nowadays, young people who can and often do play rings around their counterparts from earlier generations. The very best ones – and WindSync's artists are clearly among the best – enjoy considerable success from the outset, but it's never easy. These folks are on the road now with something like 60 concerts in a row. That's work, any way you cut it!

They began with a single movement from a real wind quintet: the [Tempo di] Marcia francese from Jean Francaix's Quintet No. 1. No soldier, French or otherwise, could have marched to this tune at the pace WindSync played it: this began akin to a race to the closest tavern, with the second part sounding a bit like the return of the crowd to the barracks, following a protracted period of drinking. I am not saying this with any negative intent but only as an ex-military guy with some experience in these matters…. No, this was truly a virtuoso reading that served as a magnificent concert opener!

But – in keeping with the ensemble's stated intent – it was the only genuine wind quintet snippet on the program.

There followed a somewhat truncated performance of Prokofiev's "Classical" Symphony, the first of two pieces by this composer heard on this program.. The playing was brisk, highly animated, and infectiously engaging. Those familiar with the orchestral version were surely impressed with how effective the transcription was.

The somewhat brief first half concluded with part one of the ensemble's Folk Song Anthology, this section devoted to American tunes by Gershwin ("Summertime," from Porgy and Bess), Copland's version of "Simple Gifts" (from Appalachian Spring), and the finale of Dvořák's "American" Quartet (which is close enough to domestic for government work, as the saying goes). All three made strong arguments for the ensemble's performances and for hearing this music in these incarnations.

The second half began with a version of Ravel's Bolero in which the five artists took turns at the repetitive theme and also switched off as snare-drum players with such skill and dexterity that there was never even the slightest hint of a missed beat. This too was truncated but listeners who are confounded by the repetitions (as opposed to those who are transfixed thereby) can hardly have objected to the fact that it lasted only around six minutes.

Part two of the aforementioned Folk Song Anthology brought a fine Danish tune (arranged by Paul English), a Chinese piece marking the New Year, and part of Prokofiev's Overture on Hebrew Themes, in which klezmer licks from the ensemble's clarinetist were much in evidence.

An added bonus, not on the printed program, was the "Adoration of the Magi" from Respighi's Botticelli Triptych, a lovely and reflective movement that brings together Christian and Middle Eastern influences in complete harmony – something we could stand a bit more of, nowadays.

Bernstein's Candide Overture was the last official number; the program notes told us it was the ensemble's own version. Has this music ever been played so fast, or with such borderline abandon? Well, it certainly jacked up the enthusiasm of the crowd a bit more, that's for sure!

The encore was a lovely, calming rendition of a Swahili tune, "Umoja" ("Unity").*

The pieces were all introduced by various members of the ensemble. They used no notes for these oral presentations, either. Well done!

Then the reception, which had begun during the intermission, continued in the room across from the sanctuary, where were displayed mixed media pieces by Artspace artist Nora Phillips that complemented WindSync's new CD, Common Thread.

The next RCMG concert will feature the Gregg Gelb Jazz Quartet in concert at the NC Museum of Art. For details, see our calendar.

*The encore was arranged by Valerie Coleman, of Imani Winds. Except as noted above, we don't know who did most of the other arrangements or transcriptions that were played. The assumption is that they are by the ensemble, but if so, they were worth claiming by name, and if not, then the folks who did the work ought certainly to have been credited. (It is of course conceivable that this information was provided by the group but omitted from the program by the presenter….)

Note: There are lots of clips from WindSync on YouTube, including Bolero and Candide.