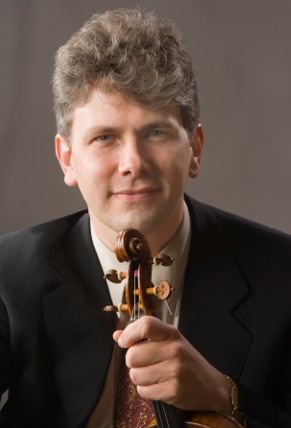 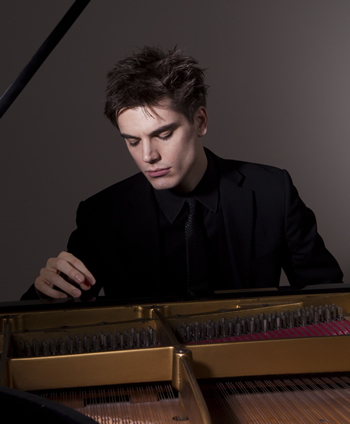 One of the most exciting and satisfying series of concerts has been the three-concert cycle of the complete violin sonatas of Ludwig van Beethoven (1770-1827) that has taken place in St. Stephen's Episcopal Church over the past almost four years. A run of all ten works is rare enough. These concerts featured two of this musically enlightened Hope Valley church's most internationally successful and talented artists, violinist Nicholas Kitchen and pianist Andrew Tyson. The turnout of eager music lovers overflowed into the organ loft, and they ran out of the very well-organized and well-written programs very early. On this occasion, the last three of the ten sonatas were played in sequence.

Beethoven's genial and ebullient Sonata No. 8 in G, Op.30, No. 3, opened the concert. The three sonatas of Op.30 were composed in 1802 and published in 1803. The set is dedicated to Czar Alexander I of Russia. This third sonata is sometimes nicknamed the "Champagne" sonata because its opening measures are reminiscent of the popping of a champagne cork. It is in three movements: an Allegro assai that is by turn gruff and playful, a moderately slow movement which displaced accents keep from being a true minuet, and a whirlwind, perpetual motion-like finale.

Kitchen's gorgeous tone and immaculate intonation were evident from the first opening phrase. Both he and Tyson played with a marvelous range of color and dynamics. Their mutual joy in the give-and-take of ensemble playing was palpable throughout the concert. Kitchen and Tyson gave full value to Beethoven's important pauses and the silences  were in precise accord for every sudden twist or acceleration of the score.

Beethoven's challenging Sonata No. 9 in A, Op. 47 ("Kreutzer"), brought the first half of the concert to a fiery, spectacular conclusion. This work challenges both players to the maximum. It was composed in great haste between March and May, 1802. On the morning of the concert, Beethoven had his student Ferdinand Ries help copy the violin part. Even so, the famous mulatto violinist George Bridgetower had to look over the composer's shoulder to play the second of the piece's three movements. Bridgetower was to have been the dedicatee but the composer took offense at comments the violinist made about a woman in which both were interested. The named dedicatee, Rodolphe Kreutzer, never played it, regarding it as "unintelligible."

The feverish opening movement ranges across a number of tempos (Adagio sostenuto-Presto-Adagio); there follows the second movement, Andante con variazioni; and the work ends in a hair raising and fiery finale that needs metaphorical seatbelts and airbags!

Kitchen's and Tyson's interpretation and performance of this monument of the repertoire were astounding. The whirlwind intensity of Beethoven's rapid composition carried over into their Dionysian-like transport as the musical sparks flew between them in their race through the fast-paced and rapid interchanges between their parts. Their ability to play so precisely in such a tornado of notes was breathtaking. Wow!

Beethoven's relative Gemütlichkeit, warm and broadly sung melodies, in Sonata No. 10 in G, Op. 96, reflects the significant change of sponsorship from the aristocracy to the new bourgeoisie, according to Melvin Berger's Guide to Sonatas. Composed in 1814, the sonata is in four movements. The opening Allegro moderato features a simple but intriguing theme. The deeply moving Adagio espressivo has melodies passing back and forth smoothly between both instruments. This is followed without pause by the Scherzo: Allegro. Its offbeat accents keep it from establishing a true waltz tempo. The finale is a brilliant set of theme and variations that race to a whirlwind finish.

It takes real artistry to keep Sonata No. 10 from being overshadowed when it follows the raging storm that is the Kreutzer! Kitchen and Tyson pulled it off magically, evolving from the deceptive charm of the opening to the dazzling fireworks finish. This run of Beethoven's complete violin sonatas has been among the top ten concerts in the Triangle, maybe statewide, of the first decade of this century. CVNC reviewed concert I January 8, 2012, and concert II January 6, 2013.

This is the strongest season yet of the St. Stephen's Concert Series. The next event, an all Mendelssohn program, will be offered on February 8. For details of it and the remaining concerts, see our calendar.

Note: For concert III, Kitchen prepared the first of what will be a series of online pre-concert presentations, available for a month in advance of his recitals; a portion of this has been uploaded to YouTube. In the past he did talks an hour before each concert.