Phantoms of the NC Symphony: A Spooky Yet Humorous Concert 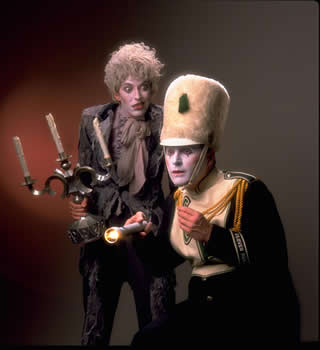 Meymandi Concert Hall was especially spooky while hosting the "Phantoms of the Orchestra" – that is, "undead" members of the NC Symphony. This Halloween-themed program, one of the Symphony's Young People's Concert series, was a huge hit for children of all ages. Popular orchestral classics were enhanced with a pair of mimes (of the acclaimed Magic Circle Mime Co.), colorful lighting, and a little zombie makeup.

Before the music started, and even before the orchestra was onstage, the two mime artists set the scene. Accompanied by chilly thunderstorm sounds, the female actor crept onstage, dressed in ghostly gray, and followed by her bumbling companion, later introduced as the "conductor's apprentice." After sequences of precisely choreographed movements, Bach's famous Toccata and Fugue in D minor began. This piece is a rapid yet methodical exploration of the minor key sound from the organ, setting the right ambience for the occasion. While the solo organist played, the Phantoms of the Orchestra began to emerge slowly from all sides of the stage, even dragging each other up through the aisles. The Symphony members were quite convincing with their costumes and zombie-like groans.

After grandly making his appearance onstage, complete with a cape, conductor David Glover introduced his undead orchestra, explaining that his (and no other) baton could adequately control the orchestra. Then the Symphony raced into Zoltán Kodály's "Dance of the Dragoons." A steady and lively drum beat creates the march-like theme, later accompanied by swirling string patterns. Especially noticeable in this work are the dynamic and tempo changes that occur. There are several long crescendos accompanied by a quickening of tempo; these were executed very convincingly. The overall mood is one of mystery and fantasy, supporting the mime artists' humorous or spooky actions.

Lucien Cailliet's orchestration of Bach's Little Fugue in G, described by Glover as "good music for casting a spell", was followed by "The Sorcerer's Apprentice" by Paul Dukas. With this latter piece, the mimes' story was the most clear, since one was humorously training as the conductor's assistant. The music itself begins with tentatively suspended string chords, and then a mysterious introduction of the melodic motive. Then more instruments are added, including a harp played in its highest register. As the music picked up with a steady drum beat, the conductor's apprentice (who had been told to sit downstage and study the music) attempted to conduct with his own baton, but the other mischievous mime came back out and scattered all the papers of his score. Dressed as a ghost, this mime actually chased Glover off the stage. After a pause in the music, the apprentice conducted the last part of the piece himself – a grand recapitulation of the original melody. In this part, swirling strings often lead the entire orchestra to crescendo. But soon the texture dwindles down to only the strings playing, ending with a sudden loud cadence.

Last on the program was "A Night on Bald Mountain" by Mussorgsky, with orchestration by Rimsky-Korsakov. This piece has drastically contrasting sections: an urgent and scary section, with dissonant clashes, fades away suddenly at the introduction of calm church bells. This provided an excellent conclusion to the concert. As the orchestration became quieter and quieter, the musicians themselves left the stage, with some remaining in the audience to play the final quiet cadence. Overall, the Halloween theme of this concert provided an excellent outlet to introduce children to classic orchestral music while keeping them suitably entertained.