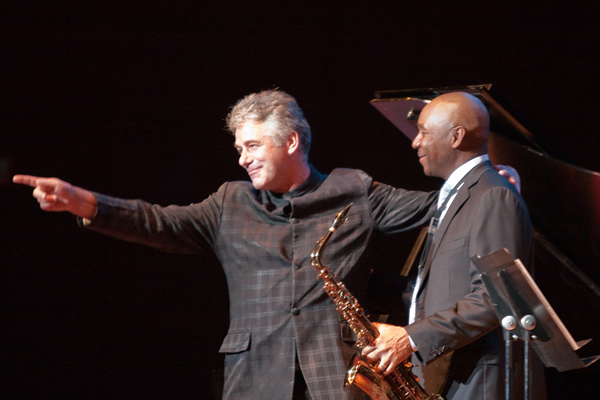 The North Carolina Symphony’s Classical Season opening weekend will feature Music Director Grant Llewellyn and saxophone legend Branford Marsalis in performances in Memorial Hall on the campus of the University of North Carolina at Chapel Hill on Thursday, Sept. 18, at 7:30 p.m., and again on Friday and Saturday, September 19-20, at 8 p.m., in Meymandi Concert Hall in downtown Raleigh.  The concerts will include Glazunov’s Saxophone Concerto, Schulhoff’s Hot Sonata, Leonard Bernstein’s Divertimento, and Debussy’s La mer.

Llewellyn is excited about opening the season with old friend Branford Marsalis, “To be able to build a relationship with a world-class musician over time is a rare and very special experience. In Branford Marsalis, North Carolina has a treasure in its midst, and I am thrilled to continue our collaborative journey in opening this season.”

NEA Jazz Master, renowned Grammy Award‐winning saxophonist and Tony Award nominee Branford Marsalis is one of the most revered instrumentalists of his time. Leader of the Branford Marsalis Quartet, one of the finest jazz groups today, and a frequent soloist with classical ensembles, Marsalis has become increasingly sought after as a featured soloist with orchestras around the world.  For the last 10 years, Marsalis has been a resident of Durham, and has quickly become a key figure in North Carolina’s cultural life.  In 2010, he organized a sold-out benefit for the North Carolina Symphony that featured Grant Llewellyn, and performers from North Carolina and around the country. He received the North Carolina Award in 2011 for his contributions to the state.

Other 2014-15 season highlights include Leonard Bernstein’s extraordinary music from the West Side Story film score brought to life by Grant Llewellyn and the North Carolina Symphony in the opening concert of the Symphony’s Pops Series on Sept. 26-27, Handel’s Messiah, and “A Pink Martini Christmas,” in December, the beautiful and romantic film Casablanca that also features a stunning musical score on Valentine’s weekend, and for the season finale in May, a collaboration with Playmaker’s Repertory Company on a new, semi-staged production of Shakespeare’s A Midsummer Night’s Dream.

Subscriptions to any of the Symphony’s 2014/15 concert series in Raleigh, Chapel Hill, Fayetteville, New Bern, Southern Pines and Wilmington are currently available online at www.ncsymphony.org/subscriptions or by calling the North Carolina Symphony Box Office at 919.733.2750 or toll free 877.627.6724.

Partners for the 2014/15 Chapel Hill Series include Carol Woods Retirement Community, and The Businesses of Market Street, Southern Village.