Baroque Festival Grand Finale: The Art of the Countertenor 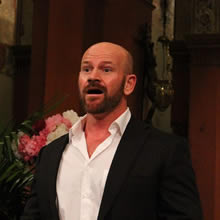 Mark Twain said, "Too much of anything is bad, but too much whiskey is just enough." Four days of splendid baroque music in the perfect space of John O'Brien's Music House is nowhere near enough, but will suffice for now. For this final concert, the resident string band of Leah Peroutka, Lelslie Conner, Joey O'Donnell, Christopher Nunnally, and O'Brien, organ and harpsichord, were embellished even further by Jacques Snyman, countertenor. Snyman admits to being over 35, but has been singing countertenor for only three years. He said that when his voice changed and he continued to sing soprano, his choir master took him aside and said, "Men don't sing like that," so he stopped singing in public until a few years ago. Someone who knows better than his choir master encouraged him to go study in London. And music lovers have benefited a great deal thereby.

The program was a buffet of most of the famous baroque and pre-baroque soprano solos: "Amarilli, mia bella" (Guilio Caccini), "Caro mio ben" (Guiseppe Girodani), "Come again" (John Dowland), "If music was the food of love" and "Music for a While" (Henry Purcell), "Ombra mai fu," "Verdi Prati," Dove sei, "Si spietata," "Eternal Source," "O Lord, whose mercies," and "Where ere you walk" (Georg Frideric Handel), "Che faro senza Euridice" (Christoph Willibald Gluck), and "Venga pur, minacci" (Wolfgang Amedeus Mozart). And there was not a note false, not an emotional turn ignored!

In "Caro mio ben," there was plenty of opportunity to study vocal nuiances. Snyman's voice is never totally devoid of vibrato, but he has it under complete control. He can begin with the slightest vibrato, increase it as the note flows, then damp it down before the cut-off. After the first couple of pieces, Snyman equated his swallow of water to the brief tuning done by the strings, pinching his fingers together and twisting them at his throat, as if tuning himself. It was part of the charming intimacy that obtains in a room seating 60-odd people.

In Dowland's "Come again," perfect diction was combined with lovely singing to present this classic piece of Renaissance flirtation.

It's probably inevitable that at this point in my life any chromatic theme is going to suggest Scarlatti's "Cat Fugue" and so it is here with "Music for a While." I felt that Snyman's ornamentation of "If music was the food of love" was excessive, bird-twittery, a little too Dolmetsch-y, but the overall musicianship of his execution of this piece was admirable.

"Eternal Source" is a stanza from a cantata for Queen Anne on her birthday; the over-the-top verse by Ambrose Phillips is typical of the time: "Eternal source of light divine/With double warmth thy beams display/And with distinguish'd glory shine/To add a lustre to this day." Handel took his usual offhand care with the music and created a beautiful composition including a notorious trumpet line, taken here by first violinist for the day Peroutka. (Conner told me that she and Peroutka had taken turns being first violinist. Since this was Sunday, it must be Peroutka.) O'Brien took the continuo line on a chamber organ perfect for the room.

Snyman has a lot of on-stage (and off-stage, for that matter) personality; he continued his swallow of water/tuning sight gag between Gluck and Mozart. Even if he had no personality, his singing would still be first rate. He has good pitch, good tone, good diction, good vibrato control: all around good. I look forward to continued development of his repertoire; I'm eager to hear him again.

At intermission O'Brien invited CVNC members Carolyn Kohring, John Lambert, and Steve Row to say a little about CVNC and to interact with the audience and to allow the audience to interact with the performers. CVNC members discussed briefly how they went about preparing for a performance. Apparently this reviewer is typical: I like to go into a performance with as few preconceived expectations as possible, unspotted by previous hearings of a work. With well-known pieces like "Caro mio ben" and "Ombra mai fu" that's not so easy (According to Wikipedia, this was the first piece of music ever broadcast on the radio; it's having a full life!), but I want to say that this was the finest "Ombra" / "Handel's Largo" I have ever heard. My only addition would be the addition of the nine-bar recitative. In response to the question from the audience, "What do performers like to see in a review (beside raves)?" Peroutka said, "How did we present the composition?" O'Brien said, "How did the ensemble, not just the individuals, sound?" Nunnally said he wanted the review "to be a lens to allow the performers to see how they are perceived."

I think using the performers' framework is a good way to sum up the festival. Every composition in this well-organized festival was presented in a believable and historically informed manner. The ensemble was always playing as one, all voices carefully balanced. The audience, from its enthusiasm before, during, and after each piece perceived the players as a splendid group. In addition, every performer had a chance to shine and did so. Snyman's work was especially exemplary.

My strongest recommendation to impresario O'Brien and all the performers is that this festival needs to be the "First Annual!" Encore!