Dancing in the Dark at ADF 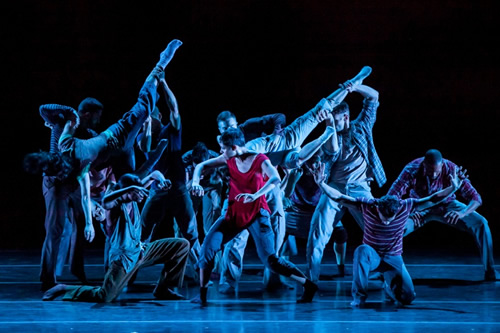 The Cedar Lake Contemporary Ballet, in its 10th anniversary season, presented a difficult program in the Durham Performing Arts Center as the American Dance Festival resumed after a short break. Cedar Lake is a phenomenally accomplished group of dancers on a mission to merge ballet with the most contemporary choreographic thinking. The company regularly works with demanding visionary choreographers from around the world, as well as from within the company. This program included the world premiere of one of the most provoking of those contemporary choreographers, Emmanuel Gat.

Gat has previously brought his company to ADF; this marks the first time ADF has presented his work set on another company. Called Ida?, it was the final of the three works danced, and it should have been the grand culmination of the evening, but despite the virtuoso dancing, it struck me as weak. Although I never like his work, I have come to appreciate some of its qualities when it is at its best, but this work is not Gat at his best.

Gat's style is cold – emotional connection between audience and stage does not seem to be something he desires – and highly calculated. His dances appear designed, rather than something that grew organically out of necessity. He likes to break or interrupt both music and movement, to stop them and separate them and bring them back together, and in Ida?, both the breaking and the conjoining seem quite arbitrary. Here he has used the Beethoven Piano Sonata No. 32, Op. 111, as intermittent background music. This is not quite as horrible as what he did with Mozart's Requiem, but quite bad enough, especially as he mixes in "text" which has very little meaning and no apparent purpose. As many dances do, Ida? considers the actions of groups and individuals as they merge, split, and change configurations.There are occasional bursts of really wonderful choreography that rise out of the murk of restless tedium, but they do not last long enough for the bubble of joy to swell in your chest. I found it an exercise in frustration, with only the consolation of scant costumes that let us finally see the beautiful bodies of the 14 dancers – sort of see them, when the lighting allowed. Like the choreography, it combined murk with hyper-brilliance, a perfect formula for eyestrain.

All three dances on the program are performed under low light conditions. The first two, at least, had good reason for this. The opening work was Hofesh Shechter's 2011 Violet Kid, which compelled complete attention even while exasperating with the authenticity of its relentless strife. Shechter made the music as well as the dance, and it is all of a piece, sound and motion working together elastically, stretching and snapping. The lighting prevents us seeing the 14 dancers' faces, eliminating individuality. But this makes us focus on the groups and their behaviors, and the almost cosmic patterning that expands, explodes, re-settles and contracts into the next dense bomb of shifting imagery. The movement is completely amazing. The faceless individuals do extraordinary things, but they are more thrilling as parts of a larger body. Together they move like a snake, all one muscle mass and whipping spine.

While Violet Kid was onstage, I hated the music for its similarity to the clatter and crash of urban life even while admiring its dense rhythms. I hated the everyday-grunge costumes for obscuring the lines of the dancers. I hated the lighting for keeping the eyes of the dancers from me even while it revealed them as one body. I hated the dance for not offering any hope of respite from the daily struggle even while being unable to take my eyes from it. But this is one of those dark, dense artworks that the mind and the heart learn to love with just a little time. It was by far the most memorable and significant of the three works on the program. I'd see it again in a heartbeat.

The middle dance was also literally dark (though not emotionally) – and backlit. Ten Duets on a Theme of Rescue (2008), by Crystal Pite, performed by five dancers, was much easier to enjoy while it was happening, but in retrospect, a bit of a cream puff. The theme certainly carries through, making no puzzling demands of your comprehension, and there are some stunning sequences of danger and rescue. When the backlights were not stabbing me right in the eyes, the silhouettes were fantastic, and the use of stands to move the lights around the dancers was a clever touch. Although it was a great relief to be rescued after being run down by the Violet Kid, before this modestly hopeful dance was over, it had forced a complete re-evaluation of the magnitude of its difficult predecessor.

The program repeats July 6. If you are considering going, you might like to look at the video clips of all three dances available on the company's website. They are brighter than what you will experience in the theater, and the camera close-ups allow you to see things you do not in person. If that does not deter you, pack your earplugs. Violet Kid gets mighty loud at times. For details, see the sidebar.