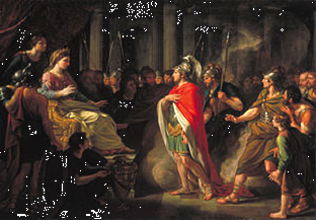 
The Meeting of Dido and Aeneas by Nathaniel Dance-Holland

The concert’s title notwithstanding, this was a musical event rather than a party; but Henry Purcell (1659-1695) was there in spirit as three varied genres of his compositions received appropriately-Baroque performances by the Mallarmé Chamber Players and the Chamber Choir of the North Carolina Master Chorale. The venue was the acoustically-friendly worship space of the Eno River Unitarian Universalist Fellowship in Durham.

The program opened with a solid reading of a late-Purcell verse anthem, “Praise the Lord, O Jerusalem,” the text of which suggests that it may have been composed for an English coronation service. With the strings of the Mallarmé ensemble as their companions, the 16-voice chorus sang stylistically under their conductor, Alfred Sturgis. The only flaw was in the anthem’s closing section, where the final syllable of each “Alleluia” was a shortened and punched “yuh” rather than the more euphonious (and un-accented) “yah.”

The singers left the stage for the remainder of the opening half of the program, as the MCP brought the set of airs and dances which Purcell composed as interludes for a lost play titled The Gordian Knot Unty’d. Following the Overture, with its two-part structure which Handel may well have adopted for his own oratorios, we heard three “Airs,” two Minuets, a Jig, and a Chaconne. Each air and dance was brief, perhaps just long enough to cover a quick scene-change, but the set served well to let us hear Purcell’s typical and unique harmonic language. Playing without a conductor on Baroque instruments, the MCE gave sprightly, spirited, and mannered performances. The fourth movement “Air” was especially gracious in its light and airy (no pun intended) musical flow. The harpsichord, so important in Baroque music, was too quiet to be heard except where improvised figurations were added over a sustained chord played by the strings.

The evening’s major work was the chamber opera, Dido and Aeneas, first performed c. 1688. As such, it was one of the first English operas, as well as Purcell’s first and only entirely-sung opera (i.e., without spoken dialogue). Conductor Sturgis returned to the podium, but conducted only the sung portions of the work, leaving the overture and other purely-instrumental sections in the MCE’s capable hands.

The opening aria, “Shake the cloud from off your brow,” was sung by soprano Johanna O’Dell in the role of Belinda, sister and handmaid to Dido, Queen of Carthage. It was an inauspicious beginning for O’Dell, whose pitch was on the low side, but she handled the rapid passages well.

Mezzo-Soprano Jennifer Seiger was impressive in the role of Dido. Her voice has clarity, appropriately little vibrato for this music, evenness from top to bottom of the octave-and-a-half range, and color sufficient to display the varied emotions which the role entails. Her closing aria, the well-known “When I am laid in earth,” tugged at the listener’s heart as Seiger sang it with the simplicity and the sublime anguish with which Purcell imbued this chaconne.

Baritone David Mellnik’s Aeneas was convincingly sung, although there are fewer opportunities for emotional content in this role than in that of Dido. Mellnik’s final dialogue with Seiger was particularly well-sung as the two engaged in musical argument.

Chorus soprano Leanne Glasgow made a strong vocal impression in her role of the “second woman,” the warmth and richness of her voice carrying easily from her position at the rear of the stage.

The chorus sang crisply, with excellent tone and diction coupled with vocal dexterity which was most in evidence in the allegro vivace witches’ chorus, “Ho ho ho!” The ‘echo effect’ which Purcell wrote into the chorus “In our deep vaulted cell” would have been more effective if the last note before each ‘echo’ had been held for its full value. Because these final notes were shortened, it was obvious that there was no echo to be imagined, despite the repetition of the final words of a phrase.

Sturgis’ conducting was clear and never intrusive; stylistically solid in this repertoire, he chose ‘just-right’ tempi for each section of the opera, with the possible exception of the aria and chorus “Haste, haste to town,” when the haste seemed unduly so.

On Purcell’s tomb in Westminster Abbey is this epitaph: "Here lyes Henry Purcell Esq., who left this life and is gone to that blessed place where only his harmony can be exceeded." To spend an evening listening to that harmony, well-performed, was to be in the presence of a musical genius whose life, like Mozart’s, was far too short.

The program will be repeated at 7:30 p.m. on Tuesday, May 20, at the Hayes-Barton United Methodist Church in Raleigh.  See the sidebar for details.