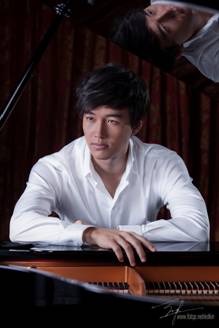 With both classical and contemporary pieces, the Chamber Orchestra of the Triangle presented its last concert of the season, an aptly named program, "The Past Meets the Present." Italian Andreas Gies' 9 Symphonic Pictures, written only several years ago,* provided a nice contrast to Mozart and Beethoven standards. The scenes depicted in 9 Symphonic Pictures are inspired by The License, a tragicomedy by Luigi Pirandello. Instead of being precisely defined, however, the sections are more fluid in transition.

Pictures begins with a tense, ominous chord, followed by the introduction of an abstract and syncopated melody. Right from the beginning, the instrumental texture constantly shifts, and dynamic changes are often quite abrupt. This showcased the orchestra's ability to master extremely precise dynamic changes. Conductor Lorenzo Muti controlled the orchestra with expression that was precise but never too tense. Phrasing and expression were also extremely accurate elements, the players so in sync that they sounded like one instrument playing. Throughout the piece, the melody is constantly and fluidly traded among and between instrumental sections. The overall tone is mournful and reminiscent, with elements of mystery appearing here and there through the melody. At one point, the meter switches to triple, led by a prominent bass line that is later syncopated with accents. The conclusion, somewhat abrupt, ends on a crescendo, with a series of short but emphatic chords played by the whole orchestra.

Mozart's "Haffner" Symphony (No. 35) begins with an Allegro con spirito movement, introduced with a motive of unison octaves, later repeated. It is buoyant and lively, with each individual part interacting rhythmically and keeping in perfect time despite difficult trills and scale passages. The calmer Andante movement features a more lyrical melody, with several suspensions. The strings often carry this melody, but woodwinds and brass provide the necessary support for dynamic changes. The Menuetto begins boisterously, alternated by more gentle sections, eventually ending quietly. In the Finale, there are many different moving lines, each section trading off the main motive, and eventually building up to energetic concordance.

Beethoven's Piano Concerto No. 2, Op. 19, was perhaps the highlight of the concert, due to the performance of exceptional guest soloist Louis Schwizgebel-Wang. After the orchestra's cheerfully processional introduction of the Allegro con brio movement, Schwizgebel-Wang entered with a delicacy of expression that was mesmerizing to experience. Throughout this movement, his skill of independence between hands became apparent, as often each hand would play a different dynamic level or texture. His light and expressive touch was powerful even in the quietest phrases. The orchestra, while supporting, remained expressive, especially during the Adagio. In this movement, the orchestra supports the piano soloist more often simultaneously, rather than switching back and forth as in the previous movement.

Instead of an orchestral introduction, the Rondo begins with a rapid and rhythmic piano melody. When the orchestra does come in, this melody is reiterated. This movement is very festive and dance-like, with a reoccurring melody that is accented trickily. The orchestra played with levels of energy usually found in a full-size orchestra, combined with the extreme precision of a chamber ensemble. Schwizgebel-Wang's expression was remarkable, even while he was not playing. As the piano part of the final movement ends somewhat quietly, the orchestra picks up the same melody, quickly crescendoing to end the piece in unison.

*We are grateful to the COT's Ann Stephenson for the following additional information about the new work and its composer:

Two years ago, Nine Symphonic Pictures, by Andreas Gies, won a competition for young composers in Spoleto, Italy. The (ongoing) competition is dedicated to the memory of Menotti; the 2014 edition is described here. The performance in Durham was the world premiere of the new work.

There follow the remarks made by conductor Lorenzo Muti at the concert.

"We are going to start this program with a really, really contemporary piece of music. Two years ago ... a local foundation started in Spoleto Italy a competition for young composers...; the competition was dedicated to the memory of Gian Carlo Menotti, who was the founder of the Spoleto Festival. It was very appropriate to have a composer competition. The winner was this very, very young Italian who was only 21 years old. His name is Andreas Gies and he comes from a small town in Italy. The composition is based on a funny story about a really important Italian writer named Luigi Pirandello, who won a Nobel Prize. The title of the short story is 'The License.' The story is kind of weird to tell you the truth, but it is funny. The piece of music written is subtitled '9 Symphonic Pictures' because basically what [he] has done is take the scenes of the story and ... depict them musically. So it is really a neat piece of programming.

"The story I think will help you understand what is going on musically and it goes this way. We are in southern Italy and you know Italians are very superstitious people, but especially in southern Italy they are very, very, very superstitious. So there is this guy who apparently one day decides to go to court because his life has become really miserable. Why has it become miserable? Because people think that he has the evil eye and so when he goes through the streets or meets people, everyone thinks that bad things happen to them because of this guy. They have met this guy and 'Oh no - bad things are going to happen to me.' So the guy thinks his life is terrible, he doesn't know what to do anymore, and his family doesn't want to have anything more to do with him. So since he has to deal with this thing, he has come to the judge to try to at least make it profitable. So he says to the judge, 'Since I have the evil eye, then give me [a] license to have the evil eye. I can then charge people so when someone comes to me and says I need you to put the evil eye on this enemy, then I can charge them.' So when the judge hears his story he says, 'What are you talking about - evil eye?' They started laughing and making fun of him and ... dismiss the case. But as they dismiss the case, the judge has behind his chair this beautiful cage with this wonderful, beautiful canary. And what happens? When the case is dismissed, the canary goes, wooo, wooo, wooo and dies. The license is granted!"