Silver Trills in a Golden Net: The NC Symphony with Yefim Bronfman 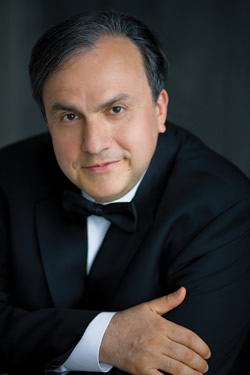 The North Carolina Symphony played a wonderful program at UNC's Memorial Hall* that satisfied on every level. Featuring guest artist Yefim Bronfman, the lyrical pianist, the musical choices also pointed up the orchestra's ever-increasing precision and range. Music director Grant Llewellyn directed with a commanding eloquence, drawing forth poetry from every passage.

The evening began with a very moving rendition of Beethoven's Overture to Coriolan, Op. 62 (1807), inspired by the story of a Roman general – brave, imperious, arrogant, vengeful and destroyed. The music has two main themes, one martial, one coaxing and conciliatory. Lllewellyn and the orchestra wove them together like a call-and-response, each eliciting the other, with tiny pauses and overlaps, until Llewellyn's hands smoothed down the air, and the general died upon a sigh, the merest whisper of sound.

Bronfman joined the orchestra for an earlier Beethoven work, the Piano Concerto No. 2 in B-flat, Op. 19 (written and revised in the 1790s). This is young Beethoven in Classical mode, with only hints of the vast Romantic melancholy and thundering passion to come. As in the Overture we had just heard, the first movement – Allegro con brio – alternates forceful melodic blasts with those of twining lyricism, lacing them into a golden net to float around the sweet silvery piano notes pouring fluidly from Bronfman's keyboard. The Adagio was crazy beautiful, with the piano bubbling away and the orchestra catching the bubbles in its net, where they shimmered on. But there are shadows, too: streaks of indigo, thunderheads that rise up and vanish, presaging storms to come, although bright order prevails. The Rondo finale is led off by the piano, and Bronfman could hardly wait for the orchestra to finish the Adagio before bounding into it. His almost languid gentleness with the caressing notes of the Adagio gave way to brisk authoritative cheerfulness as he whirled through the variations on the simple tune. The music is lovely, but more exciting was sensing the interactions among the musicians and conductor. You could see them knowing they were getting it right, really right. They brought the work to a close with a perfect finality, their faces revealing both satisfaction and awe.

After intermission, the program leaped 150 years to Sergei Prokofiev's final orchestral work, the Symphony No. 6 in E-flat minor, Op. 111 (1945). I don't know why Grant Llewellyn felt he had to charm us into appreciating it, in his comments beforehand. This is amazing music! It is, naturally, very Russian – but also very post-WWII Soviet. Triumphant, morose, bleak, nostalgic; modernistic and backwards glancing, with its rocking rhythms it images the vast machines of industry and with its constant self-interruptions, the chaos of modernity. Well-drilled and bad-mannered, it works hard through cold and hunger and drinks hard and dances at night. There's a lively bit for the harp, and popping up throughout are horn passages recalling Villa-Lobos' Bachianas Brasileiras. The whole orchestra played brilliantly, but the horn section was superb. Llewellyn was dancing with the music on the podium, and it was perfectly clear who was leading. He had this whirlwind firmly by the tail, spinning it into the stratosphere and reeling it back to conclude with éclat, followed by hugs and handshakes all around. As my neighbor murmured, "what a good concert."

*Note: This program will be repeated April 25-26 in Raleigh. For details, see the sidebar.