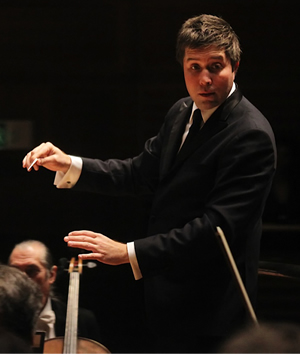 Rusalka – Antonín Dvořák's best-known opera – not to be confused with Alexander Dargomyzhsky's earlier and very different tale with the same name –  enjoyed a triumphant concert (semi-staged) production in Meymandi Hall, thanks to some distinguished soloists, a superior chorus, and a magnificent orchestra consisting of many of our region's finest players, all under the leadership of conductor Timothy Myers and presented by North Carolina Opera.

The occasion capped a veritable flurry of operatic activity throughout North Carolina on a busy weekend – performances in Charlotte, Winston-Salem, Chapel Hill, and Durham – that may be seen as (unintentionally) leading up to this rare live performance in the capital.

Not that Rusalka is all that rare or unusual any more. There's been a spate of performances of late, including one of the Met's combined broadcasts and HD telecasts just last month that was carried (literally) around the world. The work was staged at Spoleto USA a score of years ago, and recordings have long been available. Indeed, all of Dvořák's operas have been recorded, some in video versions, and a good many are available for free, on YouTube, for viewing and/or listening pleasure.

In addition, this Rusalka was not the first Dvořák opera presented here: the Fletcher Opera Institute brought us a version of The Devil and Kate in 2008.

We tend to think of the composer as an orchestral and chamber music guy who made occasional forays into choral music and songs, but he was in the thrall of opera and worked at it, with arguably mixed success, most of his professional life. This performance was therefore welcome, and that it was so splendid, on every level, made it all the more appealing.

The story deals with a water nymph who wishes to become human so she can unite with a prince. It's an opera, so we may suspect from the outset that it will end badly. It is in some respects a one-tune opera, that tune being the famous "Song to the Moon." This comes just 20 minutes into the first act, but its themes recur throughout, serving as Leitmotiven that help unify the drama. (Early on, Dvořák was infatuated with Wagner. He gradually found his own voice, balanced against fellow countryman Bedřich Smetana's far more overt nationalism, but there are Wagnerian echoes in Rusalka, not least of which are the three dryads who so often remind us of the Rhine Maidens.)

Beyond the mere fact of the opera's presentation here, the cast was appealing, and it's a tribute to the company and our region that some of the singers are locally based. The title role was portrayed by Joyce El-Khoury, who has the voice – and the looks – to bring the water nymph to vivid life – and who did so, before our very eyes. The Prince was Russell Thomas, whose commanding voice and physical presence drew favorable attention throughout. (His performance in the big Washington Messiah last December had little prepared this listener for the superior dramatic skills he displayed in Raleigh.) Margaret Gawrysiak, the witch, was an imposing presence, too, as was the Foreign Princess, sung with Wagnerian power (albeit with a shade too much "edge") by Heidi Melton.

In some respects, the spites tower over the humans in this "lyric fairy tale"; Rachel Copeland, Kristin Schwecke (a Fletcher scholar), and Jami Rhodes were consistently appealing, vocally and theatrically, too (although their entrances and exits via a steep ladder that no OSHA inspector could have approved for people in long dresses made this observer nervous every single time). And beyond the trio, Tom Fox's interpretation of Vodnik, Rusalka's father, given with awesome vocal and dramatic power, at times made his character seem the opera's dominant figure.

Others in the cast were Donald Hartmann (Gamekeeper), Shannon French (Turnspit), and Scott MacLeod (Hunter and chorus master). The lighting was by Ross Kolman. The costumes were from San Antonio. Roger Pines' supertitles came off without any appreciable glitches, thanks to Jessica Samples' close attention. The show was directed by Crystal Manich (who also did NCO's Bohème.)

The backstage chorus of 25 singers included some vocalists who are fine soloists in their own right. As noted, the orchestra was populated with exceptional instrumentalists, contributing to a polished reading that was throughout magnificently balanced and in which the woodwinds and brass in particular excelled. There were a few fleeting moments when there seemed to be too much orchestra for the singers (who were arrayed across the platform at the lip of the stage), but in truth those instances could well have been factors of the hall's strange acoustics and where we were sitting.

The Czech language sounded pretty convincing to this non-Czech speaker. Language was once a barrier to performing these great operas that are still relatively rarely heard in America, but our singers get better and more proficient all the time. Hooray! Can Dalibor be far behind?

The work is of course driven by fairy tale and magic, but the real magic was in the music and the tremendously unified performance. There were some props and a few stage pieces, including a pool that represented (with some success) the lake, and the costumes definitely helped, but the story and its drama and the tale's gripping beauty unfolded quite marvelously, making the work seem in some respects like a concise tone poem, so engaging it was from start to finish.

To the cast, the crew, the production team, and NCO's management, we say well done!

Note: That "big tune," the "Song of the Moon," may be heard to advantage here, as sung by the great Czech soprano Gabriela Beňačková. I hasten to say that I use this YouTube example for illustrative purposes only; in Raleigh, El-Khoury more than held her own against the singing heard in this excerpt.

There were some issues with the hall itself: several blocked exits on the orchestra level (constituting a major safety issue), noisy HVAC blowers and out-of-control temperatures, and failure to set both escalators to expedite the departure of downstairs patrons. The place needs renovation and enhancement.