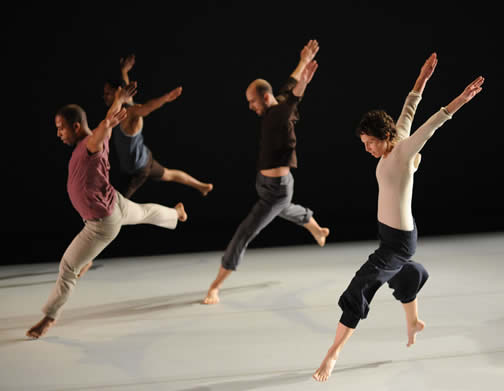 "Now that was something different." said my friend's mother as we walked from the auditorium into the lobby of the Reynolds Industries Theater on the campus of Duke University. She was commenting on the concert we had just heard, entitled "Curious Commissions," featuring three works of music all relating in some way to unusual commissioning circumstances. The concert was also a collaboration of three North Carolina arts organizations: Mallarmé Chamber Players, Helen Simoneau Danse, and the Chamber Choir of the Choral Society of Durham.

The program opened with a serendipitous juxtaposition of the music of Johann Sebastian Bach and the modern dance of Helen Simoneau in her piece, Leap. The glorious Sonata No. 6 in G, S.1019, for violin and harpsichord, was performed by violinist Jacqui Carrasco and harpsichordist Elaine Funaro while dancers Ariel Freedman and Burr Johnson interpreted the music through Simoneau's choreography. The harpsichord, painted with mostly pastel patterns, and the dancers' costumes, in wispy pastels, designed by Reid Bartelme, stood out strikingly against the black stage and backdrop. The harpsichordist and violinist were positioned on the left side of the stage and the dancers used all of the rest of the stage for their lovely pas de deux.

The dancers glided across the stage, at times synchronized in their movements and sometimes intertwining or in contrasting movements. The first movement allegro and the second movement largo were danced by the duo. The third movement; an allegro solo for the harpsichord, was danced by Freedman alone, and the fourth movement, a poignant adagio, was soloed by Johnson. The fifth movement, an enthralling allegro, brought the two together in a lovely coordinated dance sequence. Watching this couple dance and listening to the exquisite music of Bach so masterfully played was a very special treat.

The next selection on the program was the Concerto for Harpsichord composed by the Spanish composer Manuel de Falla. It was written on a commission from the brilliant harpsichordist Wanda Landowska. The work is more properly described as chamber music in the form of a sextet. Scored for harpsichord and five other instruments, it was performed by harpsichordist Funaro, flutist Carla Copeland-Burns, oboist Bo Newsome, clarinetist Kevin Streich, violinist Carrasco and cellist Marc Moskovitz. The work was composed in 1926, three years after Master Peter's Puppet Show, during Falla's years in Granada. His love of Spanish folksongs and the influence of Stravinsky are both quite apparent in this rhythmically and sonically challenging work.

The first movement, marked allegro, is filled with playful tunes and intricate rhythms masterfully presented by the ensemble. The conversations between the instruments and the combinations of the unique timbres were handled skillfully. The second movement, marked Lento, began with a florid harpsichord arpeggio followed by a homophonic theme proceeding through most of the movement. The third movement, Vivace, is a happy dance with lively rhythms. The premiere of the Concerto was marred by mistakes in the copied parts and inadequate rehearsal time; as it turned out, Landowska never again played the piece she commissioned. It remains a ground-breaking and radical piece with some unique challenges for the soloist as well as for the ensemble. This presentation revealed the rewarding pleasures that issue from a well-played performance.

After intermission, Rodney Wynkoop conducted a performance of Gian Carlo Menotti's rambunctious The Unicorn, the Gorgon and the Manticore, or Three Sundays of a Poet. The work was commissioned in 1958 by the Elizabeth Sprague Coolidge Foundation and calls for chorus, dancers, and nine instrumentalists including flute, oboe, clarinet, bassoon, trumpet, cello, double bass, harp, and percussion. It relates the story of an eccentric poet who lives in a castle and whose life is presented in three stages: youth, middle-age, and old age, as represented by the three mythical beasts of the title. His interactions with the townspeople reveal much about both.

The work is modeled on the late Renaissance Italian madrigal comedy, a short-lived form of musical theater derived from the commedia dell'arte tradition. Menotti labeled it "a madrigal fable." The singing was precise and clear; much of it in a pitched Sprechgesang style and much of it clearly understandable though a lot of words were rapidly articulated (as is common in madrigal writing.) The printed text was helpful, and the audience was very interested in following the words based on the paper rustling at page turn time!

The work consists of an introduction, 12 madrigals (all but one sung a cappella), and six instrumental interludes, in which Menotti adapts the forms and styles of Renaissance music to his modern musical language. This was a charming and polished performance with beguiling lowbrow humor, clever allegory, and spicy mockery of shallow and hypocritical behavior. The performance, typical of the Choral Society of Durham (Chamber Choir), was outstanding and communicated a high sense of pleasure and just plain fun. It certainly was "something different," and it all added up to a perfectly delightful afternoon concert.