Brilliant Performance of a Changed Program 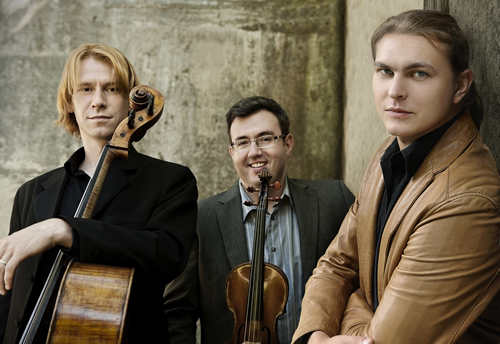 A recent surgical intervention to the shoulder of the scheduled guest artist, clarinet virtuoso David Shifrin, caused changes in an entire week's programs dedicated to the clarinet and featuring a duet with Shifrin and Kelly Burke, Principal Clarinet of the Greensboro Symphony. No doubt audiences were happy to hear a symphony by Rachmaninoff and to discover the delightful Russian trio, the Hermitage Piano Trio, whose members played the Triple Concerto of Beethoven on the Masterworks Series.

The series, Sitkovetsky and Friends, presented in the Recital Hall on the campus of the University of North Carolina in Greensboro (UNCG), also underwent a change of soloist and change of program, maintaining only one of the programmed works, the (incomplete) Sonata for Clarinet and Piano by Mikhail Glinka (1804-57), frequently referred to as "the father of classical Russian music." Originally conceived for viola and piano but abandoned with an unfinished second movement and no third, it was finished and edited by Vadim Borisovski and has since been adopted by clarinetists (who share the same range of notes as the viola) the world over. Burke, professor of clarinet at UNCG, was subtly accompanied at the piano by the ever-attentive and refined pianist Inara Zandmane, also on the UNCG faculty. Burke has a gorgeous dark tone that is incredibly even from the bottom to the top of the register. Although the Glinka is not a showcase for clarinet pyrotechnics, it does demand technique and stamina, both of which Burke demonstrated amply.

The Hermitage Piano Trio – Misha Keylin, violin, Sergey Antonov, cello, and Ilya Kazantsev, piano – then took the stage to play a set of variations by Beethoven on a song, "My Tailor's Cockatoo" by Austrian operetta-composer Wenzel Müller, referred to as the Kakadu Variations, Opus 121a. Probably composed in the early 1800s and revised late in his life, the work is uneven in nature with a mature introduction, a "by the books" set of ten variations and a mature and sophisticated conclusion and coda.

The Hermitage Piano Trio was awesome! Dressed in shiny black tunic-like shirts and sporting long blond hair, these gentlemen blew me away with their cohesive and refined musicianship. Impeccable intonation, beautiful tone and incredible virtuosic technique placed this Trio above all I have ever heard! They began the Beethoven as though it were a late quartet – mysterious and subtle (despite the comic-sounding name) – and finished it with verve and panache.

As Maestro Dmitry Sitkovetsky pointed out in his oral program notes, Brahms stood in awe of his predecessor, Beethoven. He postponed writing a symphony until his full maturity, writing instead, a variety of chamber works. Yet the nature of many of these chamber pieces is symphonic in nature – complex, profound, and composed with themes capable of being developed, transformed, and reworked. The Piano Quintet in F Minor, Op. 34, is one of such profoundly symphonic works. In the orchestra repertory, only the First Piano Concerto and the two Serenades precede this quintet.

The Hermitage Trio added a first violin, Sitkovetsky, himself, and a viola, Scott Rawls, GSO Principal and UNCG professor, to round out the quintet. Starting with the strings in unison, the piano soon changes the mood from foreboding to passion. Mesmerized, I put down my pen to listen to this familiar piece, an old friend, as it was played to perfection, with all its whimsies and contrasts matched with outstanding precision and passion. Only in the Scherzo, with its alternating 6/8 and 2/4, did I find a meager bone to pick – some of the pianissimo staccato string playing seemed too short, a sort of hyper-spiccato, lacking body. Overall, this was a superlative performance of an extraordinary piece of music. The audience grunted unanimously after the brilliant flourish that closes the fourth movement – and rose immediately to its feet.

Let's have more of this kind of music-making!