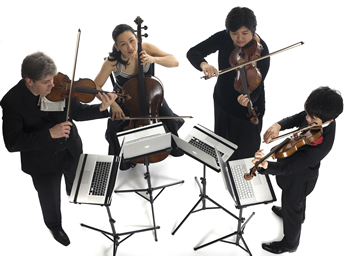 This is the Golden Age for Chamber Music Ensembles. A remarkable number of highly trained musicians are touring nationally and internationally performing for a myriad of concert series and venues. High on any critic's list of the best string quartets is the Borromeo Quartet, which gave brilliant performances of a very enterprising program as part of the Concert Series at St. Stephen's Episcopal Church. The sanctuary of the modern designed church is an ideal venue for chamber music and the bright sunlight outside brought out the rich colors of the stylized stained glass behind the performers.

The Borromeo Quartet consists of first violinist Nicholas Kitchen, second violinist Kristopher Tong, violist Mai Motobuchi, and cellist Yeesum Kim. The quartet is a pioneer using laptops instead of printed scores and have also used them to provide manuscript scores on occasion. St. Stephen's Church has a long tradition of presenting fine music and the whole Hope Valley section seems a nursery for musical talent, several of the local children, such as Nicholas Kitchen, having gone on to major musical careers. Borromeo concerts are always preceded by lecture/performances led by Kitchen. Joseph Kitchen, his father, pens the excellent program notes.

Mozart's Quartet in F, K.590, was the third and last of a never-completed set of six commissioned by Prussian King Friedrich Wilhelm II who was an avid cellist. These were the last three quartets Mozart composed and they are known both as "The Prussian Quartets" and as the "cello" quartets because the composer managed to give the cello more prominent solo portions without unduly sacrificing the roles of the other three instruments. The scoring is remarkably concise throughout its standard four movements. The opening Allegretto moderato magically transforms the opening theme consisting of a simple ascending arpeggio followed by a descending scale. The Andante seems to meld bliss and sorrow into a seamless line of melody. The Menuetto: Allegretto and its central trio abound in appoggiaturas. The lively finale, Allegretto, gives every player exposed, showy passages, intricate fugal sections, along with important pauses and unexpected harmonic turns.

The Borromeo's playing of the Mozart combined extraordinary passion, precision, and style. Each player produced rich warm tones in their exposed solo sections, and their intonation was superb. They were careful to give full value to the many important bits of silence in the score.

In 1988 the Emerson Quartet burst upon the scene when they presented all six Bartók quartets in a single evening for its Carnegie Hall debut. Among the ensembles to take up this gauntlet is the Borromeo which brought the set to Duke University June 22, 2003 and will bring them to the St. Stephen's series March 8, 2015. Since their first foray with the set, Kitchen has made in-depth studies of Bartók's original manuscripts in the Bartók Archive in Budapest, Hungary and this has further enhanced the Borromeo's interpretations.

Bartók's Fourth Quartet is an extraordinary work in five movements which form a musical arch. All twelve tones of the chromatic scale are given equal treatment. The serene third movement serves as the keystone flanked on both sides by remarkable scherzo movements II and IV while the bases of the arch are movements, I and V, which are vigorously dissonant. The second movement, played as fast as possible with muted strings, has been called "the mosquito movement," while the fourth movement consists wholly of pizzicatos and is a popular encore piece. Kitchen's pre-concert presentation showed the amazing music transformations Bartók made of some simple musical elements.

The Borromeo Quartet played the socks off Bartók's Fourth Quartet in a performance filled with breathtaking virtuosity and depth of stylistic insight. They delivered the outer two movements' driving, energetic dissonance with astonishing mastery. Their second movement was filled with quicksilver momentum. They brought a seraphic serenity to the third movement, a timeless interlude. The drive and precision of their plucked strings in the third movement was as astonishing as it was delightful.

It is too bad many touring groups and presenters opt to always program a single famous work of a composer instead of exploring others of his quartets. Such is the case of Dvořák. His Quartet in F, Op. 96 ("American"), shows up most of the time to the neglect of Op. 51, Op. 61, Op.105, and Op. 106. Therefore, what a pleasure it was to hear the Borromeo play Dvořák's Quartet No. 11 in C, Op. 61! The composer hurriedly composed the work in about two weeks for a scheduled Vienna-based Hellmesberger Quartet concert in 1881. Fire at the scheduled venue, the Ringtheater, Vienna, led to a year's delay of its premiere. This was done instead by the Joachim Quartet in Berlin. Beethoven and Schubert were mainstays of the Helmesbergers and this is reflected in the C Major Quartet. Because of Viennese prejudice, Czech folk elements are down-played. Its over-all four movement structure shows the influence of Beethoven's Op. 59, No. 1 while there is a Schubertian quality to the long-spun melodies of the second movement. The stately opening Allegro and lyrical second movement are followed by a lively Scherzo and a Vivace finale worthy of the composer's Slavonic Dances. The composer took the threads of earlier composers' models and wove them into a distinctive Dvořákian sound.

Kitchen's fiddling throughout the Dvořák was extraordinary, not least in some fast passages the composer put in as a "gift" for the original commissioning quartet leader. Dvořák's instrument was the viola and Motobuchi's rich, resonant viola playing was a constant treat as was Kim's solid, sonorous cello playing. The quartet's seating, with the violinists facing each other, gave extra opportunity to appreciate Tong's playing of the second violin part.