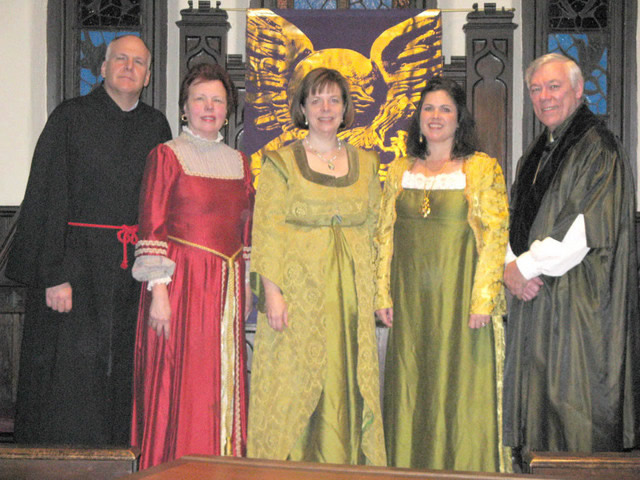 St. Mary's Chapel\, once the church for the Thompson Orphanage and erected in 1892 as a memorial for the daughter of William Bynum, its builder, now sits in a bucolic oasis close to downtown Charlotte. Bordered on all sides by traffic rushing along a maze of one-way streets, the church hearkens back to a more peaceful time when it functioned as the spiritual center of a defined community. It was declared a historic site in 1975 by the Charlotte-Mecklenburg Historic Properties Commission, restored, and reopened in 1976 for concerts, weddings, etc. Carolina Pro Musica has been part of the building's history, too, having launched a concert series there in 1977 and retaining the site for their annual Christmas concerts. The small, relatively plain chapel is a perfect venue in which to hear them.

The musicians perform in period dress on historic replicas. They were soprano Rebecca Miller Saunders (click here for bios of all the artists), Karen Hite Jacob (harpsichord and lap harp), Edward Ferrell (recorders and guitar), and Holly Wright Maurer (bass viola da gamba and recorder). Jacob, the ensemble's director and a co-founder of the Southeast Historical Keyboard Society, performs on a single-manual harpsichord, a modified replica of a 17th century Mersenne, by Willard Martin. The recorders are 18th century replicas made of English boxwood. Various hand-held percussion (bells, drums, finger cymbals, tambourine) were added throughout.

Those familiar with the Christmas Eve Service of Nine Lessons and Carols at Kings College Chapel, Cambridge, would recognize the format of Carolina Pro Musica's concert – a series of readings followed by music related to those texts. Unlike the English prototype which utilizes only readings from the Bible, this performance included readings from other sources in addition to the Bible: "Adam Lay ybounden" by an anonymous poet (ca.1400) about the bondage of Adam as related in the Book of Genesis, William Ballet's "Sweet was the Song" from his Lute Book (ca.1600), and Ben Jonson's "Carol" are all works many are accustomed to hearing sung instead of read. The inclusion of T.S. Eliot's "Journey of the Magi" from the Ariel Poems (1927), a collection of poems on Christmas themes by him and other poets, was markedly different both in historic era and in tone, as a world-weary Magi recalls the pain of the journey to see the Christ child, and with the birth of Christ, the vanishing of the world as he'd known it. Local radio personality Bob Sweeten read all the lessons, carefully pacing the readings to allow time for reflection. The audience was invited to sing along on several carols.

Several compositions were drawn from the Piae Cantiones collection (1582) of early songs from Finland, Sweden, and other European countries. These were "Personent Hodie," "Corde natus ex parentis," "Divinum mysterium," and "Gentle Mary laid her child." Others were by Michael Praetorius ("Es ist ein Ros,'" "In dulci jubilo," and "Puer nobis"), while the majority were from English sources. The concluding work was an Italian lauda, (song of praise) "Gloria in Cielo."

What Carolina Pro Musica does so well is perform this early repertory with the delicacy it requires. This is largely music without a lower-ranged bass part, as that sound ideal did not yet exist, and the resulting treble-ranged parts are sung without much vibrato. They manage to bring out the interest inherent within each piece, and with some creative arrangements regarding who will sing/play what, simply allow the music to speak for itself.

It was obvious they know this repertory very well, and they performed it in flawless ensemble. Frequently there were only two performers executing melodic lines, while the other two would add a simple pedal tone (on gamba, as in "Veni, veni Emmanuel"), a percussion timbre, or light doubling of a solo part ("Personent Hodie"). Ms. Saunders sang with exquisite attention to the diction of each word, and blended beautifully both with the instruments and other singers. Mr. Ferrell was frequently the second high voice – together the two matched each other's phrasing and tapering of dynamic levels at phrase ends. On "Hail Mary Full of Grace" (English, 15th c.) we heard all four sing on the song's refrain with wonderful intonation, particularly on the perfect intervals ending each phrase. Other highlights were "Greensleeves," played as a mini theme and variations set by Ferrell on guitar, followed by "What Child is this?" sung by Saunders to guitar chordal accompaniment. How wonderfully refreshing to hear such beautiful (and non-commercial) music performed so wonderfully within this enchanting historic setting!