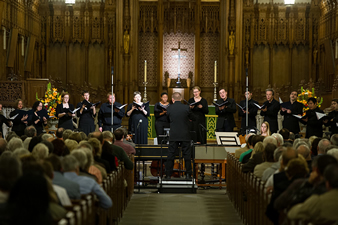 While even most non-musicians have heard of Johann Sebastian Bach, the composers Johann Hermann Schein, Johann Schelle, and Johann Kuhnau would likely draw blank stares, with Georg Philipp Telemann somewhere in between. This is unfortunate, given that all those other Johanns were predecessors of Bach as Cantor at the Thomaskirche (St. Thomas Church) in Leipzig, Germany. Telemann could have been the Thomaskantor; the job was his for the taking, but he turned it down, producing the comment from a Leipzig City Council member that "since we could not get the best person, we will have to take Bach."

In a beautifully-designed program, conductor Brian A. Schmidt led his Duke Vespers Ensemble and Duke Chapel's Cappella Baroque in music composed over a one-hundred-year span for use at St. Thomas Church, together with a secular work by the aforementioned Telemann.

The concert opened with Schein's Ich lasse dich nicht, a setting of Genesis 32:26 and Psalm 4:8. This five-voice chorus, first published in 1623, echoes the Renaissance/Early Baroque style of Monteverdi. The singers blended their voices well, waking the reverberant acoustic of Duke Chapel with their floating sounds.

Schelle's chorale cantata Christus, der ist mein leben ("Christ is my life"), based on a melody by Melchior Vulpius, sets the eight stanzas of this hymn; each stanza is treated first as a freely-composed chorus, then as a simple chorale statement which, as Schmidt stated in his verbal program notes, would have been sung by the entire congregation. In Schelle's word painting of the German words for "joy" (a florid passage) and "sleep" (a lullaby-like rocking), we heard a foretaste of Bach's own musical iconography which one musicologist described as Bach's "music bound to the word." Robbie Link's violone, being placed on the center-aisle axis of the Chapel, blossomed as his lower bass notes took advantage of the chance to develop as they moved down the stone floor.

Kuhnau, Bach's immediate predecessor as Thomaskantor, was represented by a Good Friday motet; like Schein's chorus, this work hearkens back to the Italian Renaissance choral style of Palestrina, Vittoria, and Gesualdo. Its unaccompanied five-voice texture, with its many points of imitation and chromaticism, was sung elegantly and movingly.

The instrumentalists were featured in Telemann's Concerto Polonois (Polish Concerto) in G, which was on the program because, Schmidt said, "It's fun to play." Its four short movements, while identified only by musical tempo names, are clearly derived from dance forms. In particular, the third movement, Largo, brings to mind a stately Sarabande. With the violinists and violists standing, and with Schmidt's mobile encouragement, Telemann's "concerto grosso" was played both enthusiastically and musically.

The program concluded with two works of J.S. Bach. First was his Concerto in A minor for four harpsichords, S.1065, featuring harpsichordists Elaine Funaro, Robert Parkins, Beverly Biggs, and Alexander Silbiger. The music is Bach's re-writing of Antonio Vivaldi's Concerto in B minor for four violins (RV 580); Bach took the solo violin parts and turned them into florid keyboard versions. While the clarity of many of the rapid figurations fell victim to the long reverberation time in the Chapel, the rare sound of four (that's FOUR!) harpsichords all playing at once was a sonic treat. The strings, playing sotto voce at times so as not to drown out the keyboards, were in their element with Vivaldi's vigorous rhythms, as interpreted by Bach.

To conclude, we heard the kind of music which adorned the liturgy at the Thomaskirche every Sunday during the second quarter of the eighteenth century: what we now call simply "a Bach cantata." The vehicle was Cantata 78, Jesu, der du meine Seele ("Jesus, you who my soul ... have rescued"), written for the 14th Sunday after Trinity in 1724. Using six of the twelve stanzas of Johann Rist's eponymous hymn, the cantata uses the full chorus for its opening and closing movements; recitatives and arias for solo voices comprise the five inner sections. The rarely-used form of the passacaglia shapes the first chorus, with flutes and oboes added to the string orchestra, the whole undergirded by organ continuo. Bach likely never heard it played and sung any better, even if the chorus bass section seemed a bit underpowered.

The second movement, a duet for soprano and alto soloists, is entitled "Wir eilen mit schwachen, doch emsigen Schritten" ("We hasten with weak, yet eager steps"). Schmidt's tempo seemed to take "eilen" somewhat too seriously, but the two unnamed soloists acquitted themselves admirably. For this aria and the tenor recitative which followed, Schmidt replaced the organ continuo with harpsichord; unfortunately, the latter was nearly inaudible, even from seats not far from the performers. For the bass recitative and aria which followed, the organ returned and brought better balance to the ensemble. Throughout the work, many examples of Bach's word-painting were in evidence as the German words for "hurry," "far and wide," "evil," "Hell," "grave," and "cross" (along with others) were emphasized by their musical treatment.

The program booklet was a work of art in itself, omitting only the names of the vocal soloists and the author of the exemplary literal translations of the original Latin and German texts.

In short, an evening of music beautifully sung and played and, as befits a major university, also serving to enlighten its audience by providing the historical context of this significant music.

The Vespers Ensemble's offering continue on October 31 with a "Hallows Eve" program. For details, see our calendar.