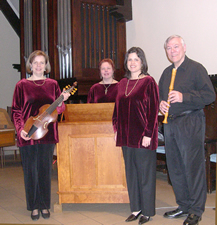 Music in sixteenth century Europe was under the influence of politics and religion. It was often difficult to tell where one ended and the other began. During this time Ferdinand II of Hapsburg obtained support of the Spanish Hapsburg line, was elected King of Bohemia by the Bohemian diet, King of Hungary by the Hungarian estates, and in 1619, Holy Roman Emperor. Though the Catholics and moderate Lutherans had attempted to forge a peace, the rising Calvinists had been ignored and so the Thirty Years’ War began as Ferdinand II came to power.

The Hapsburgs had long looked to Italy for their chapel masters, composers, and virtuosi. When the imperial court was moved from Graz to Vienna, Italian composers already in Ferdinand II’s employment went to the new location. Thus Vienna became home to one of the largest, most extraordinary musical organizations in seventeenth-century Europe. Ferdinand II was stanchly catholic and wanted to set a good example for others. Not surprisingly, then, works from the imperial court were among the earliest sacred compositions north of the Alps to incorporate modern Italianate innovations, including obbligato instrumental parts, monody, the concertato style, and techniques of sacred dialogue.

Carolina Pro Musica’s second concert of the season continues to focus on Italian influences beyond the bounds of Italy. Most of the composers and musicians in Vienna at the court were from Venice. Often their compositions were published ‘back home’ as is the case with Ghirlanda Sacra a collection of sacred works printed in 1625. This volume serves as the source for vocal works by Giovanni Giacomo Arrigoni and Giovanni Priuli who worked at the court.  A large number of instrumentalists provided music for daily masses, church feast days (about 250 a year) and secular celebrations such as birthdays. We include instrumental music by Frescobaldi, Marini and Castello whose compositions may well have been part of the court. These vocal and instrumental works provide an introduction to this largely overlooked music culture offering glimpses of what music would become in less than a hundred years.