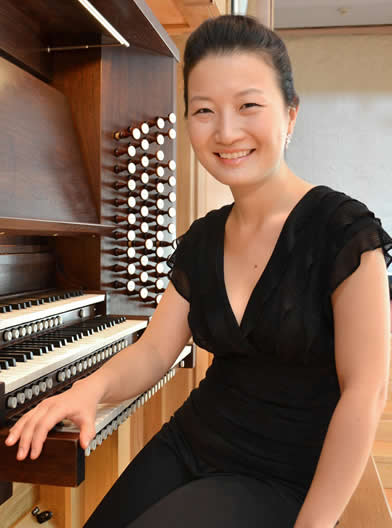 The 1978 Flentrop organ at St. Stephen's is in the style of classical French Baroque organs. Opening the recital with François Couperin's Offertoire sur les Grands Jeux, Lee showed off the appropriate colors for this iconic music: Trompette, Cromorne, and Cornet sparkled, contrasting with quieter passages played on the flute stops. In the reverberant acoustic, a more detached touch would have better emphasized the pervasive notes inégale (the French Baroque practice of adding rhythmic interest through unequal treatment of notes written as equal pairs).

Aside from a set of Epistle Sonatas for chamber ensemble and organ, Mozart's only compositions for organ were for a mechanical device rather like a music box or player-piano in function: a large cylinder was fitted with movable pegs representing the notes of a piece of music. When the cylinder of this Flötenuhr ("flute clock") turned, it activated mechanisms connected to organ pipes. It is a tribute to Mozart's genius that even the considerable restrictions of this system did not keep him from writing substantial music for it. These works include two fantasias in F minor; we heard the smaller of these, K. 594, a three-part work in ABA form with an Allegro section framed by two Andante movements. While it was somewhat of a surprise to hear the work beginning and ending with the organ's tremulant in action (such devices not being part of the flute clocks' capabilities), adding it to the flute stops made the poignant quality of the Andante sections richer. The Allegro section was brilliantly played, albeit with a top-heavy registration, as Lee handled the cascades of sixteenth-note thirds effortlessly.

Because the St. Stephen's organ has no registration aids, any stop changes during a particular piece of music require the assistance of a Registrant. This often leads to more straight-forward performances which do not make their effects through frequent changes of stops/sounds. This was the case with J.S. Bach's Fantasia in G, entitled Pièce d'Orgue. Like the Mozart fantasia, this work is in three parts. The section titles are unique for Bach's organ works, in that they are French: Très Vitement, Gravement, Lentement. The opening toccata-like section was played with good rhythmic drive, matched in the final section where the weight of the repeating pedal low-D pitches tended to obscure some of the figurations flying by in Lee's hands. The sublime Gravement section, in five voices, was played with a single "plenum" registration throughout. This is a valid approach; however, a less legato treatment with greater articulation of each voice's phrasing would have made the 150-plus measures of the same full sound more satisfying.

Not one, but two registrants were required for Josef Rheinberger's Introduction and Passacaglia, which began the second half of the recital. In a masterful performance, Lee succeeded in making the organ sound far more like the German Romantic instruments for which Rheinberger wrote. These two movements from his Sonata No. 8, Op. 132, are among the Lichtenstein composer's most well-known works. Lee played the Passacaglia with a firm grasp of its form, drawing upon all the organ's colors to illumine the variations which Rheinberger weaves over and around the work's theme.

The early Romantic mood was continued with Mendelssohn's Andante with Variations. Dating from 1844, this work is much less serious in character than the composer's more frequently-heard six organ sonatas. Lee's performance sang convincingly.

The afternoon's penultimate work was a chorale prelude on Herzlich lieb hab ich dich, o Herr, by Johann Ludwig Krebs, who studied with J.S. Bach. (Bach called his gifted pupil "the best Krebs in the Bache," punning on the meaning of the two surnames (Krebs=crab; Bach=brook or stream). The graceful arabesques in the flute stops accompanying the ornamented chorale melody are already moving into the style galant of the later 18th century, a style also embraced by Bach's son Carl Philip Emmanuel. It is interesting that Krebs set this chorale in triple meter (3/4), when one assumes he knew the duple meter (4/4) version which J.S. Bach used to great effect as the closing movement of his St. John Passion. While not a major work, Kreb's prelude shows the beauty with which a chorale was once prefaced during a worship service, especially when played so well.

The recital concluded with the best-known of French composer Jehan Alain's works, the Litanies. Based on a driving theme of fourteen notes (in its most prominent guise), it depicts the Christian soul in agonized prayer, bereft of reason, clinging only to faith. The work demands a bravura approach, which it received at Ms Lee's hands. While her tempo seemed on the fast side considering St. Stephen's live acoustic, her performance was satisfyingly articulate and moving. The small-but-appreciative audience showed its approval as they stood to applaud.

St. Stephen's is known for the high quality of its musical offerings, in both concerts and worship services. They should be commended for bringing such fine music-making to the community. For remaining concerts this season, see our calendar.