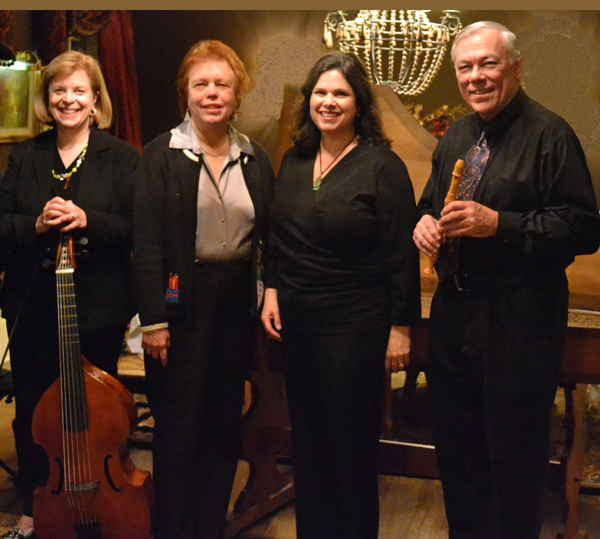 The early music ensemble Carolina Pro Musica (Karen Jacob, harpsichord/organ, Holly Maurer, viola da gamba/recorder, Rebecca Miller, soprano, and Edward Ferrell, recorder/flauto traverso) is devoting its 36th season to the Italian influence on European music of the 17th and 18th centuries. Performed at St. Martin's Episcopal Church, the first concert of the season, "Knowing the Styles," focused on the three most prominent composers of the late Baroque: Handel, Telemann, and J.S Bach. Two works by the mid-Baroque Italian composers Alessandro Scarlatti (1660-1725) and the lesser-known Pietro Antonio Fiocco (1653-1714) served as "source" material – closer both geographically/culturally and chronologically to that initial seed that sprouted the Baroque period.

Fiocco's recently-discovered Sonata in C Major for recorder and continuo opened the program. Born in Venice, Fiocco carried the Italian style with him to Brussels, where he spent the bulk of his career. Hallmarks of the Baroque style are on display in Fiocco's piece: the grounding presence of the continuo, the celebration of contrast (particularly in the slow-fast-slow-fast tempo markings), and the exploration of emotional expression. While instrumental music really came into its own in the Baroque, it often bore resemblance to the vocal music of its time. The sonata's second Adagio, with its imitative duet between viol and recorder, is a lovely example.

With contrast in mind, the program alternated instrumental and vocal pieces, following Fiocco's sonata with Handel's "Oh, Had I Jubal's Lyre," from the oratorio Joshua (1748). Handel, whose music came twice more in the concert, was one of the Baroque period's most cosmopolitan composers. Born in Halle, Germany, he studied for more than three years in Florence, Rome, Naples, and Venice, returning to Germany before finally landing in London.

In all three Handel pieces, as well as a single aria by Scarlatti, soprano Rebecca Miller sang beautifully. Now in her 20th year with Carolina Pro Musica, Miller's voice has a clear, pure tone and fine accuracy, managing the many melismas gracefully. In Scarlatti's dirge-like "Ombre opache," from the chamber cantata Correa nel seno amato (scored originally for two violins and continuo, but performed here with two recorders), she summoned the title's dark shadows with quiet sorrow. Salve Regina, a 1707 work from Handel's time in Rome, showed off Miller's expressive vocal control in sustained crescendi in the opening section, "Salve Regina," and expectant, unaccompanied phrases in the second, "Ad te clemamus." And perhaps the most telling examples of Italian influence across European music are to be found in Handel's operas, so it was fitting that the program ended with the lilting "Va godendo vezzoso e bello" from Serse (1738), which features wonderful call and response between voice and recorder.

Two trio sonatas by Telemann were really the pillars of the concert, placed third and seventh in the eight-piece program. The Trio for Flauto traverso, Viol and Continuo, TWV 42:g15, proved to be a challenge for the ensemble and will fare better after more rehearsal. But the musicians rose to the occasion later in the evening with the four-movement Trio for Recorder, Viol and Continuo, TWV 42: g9. While the Vivace (second) movement was more stately than lively, the Largo (third) movement, with its viol solo, was truly soulful.

(Telemann's works are categorized according to genre, rather than chronology. Chamber works for two instruments and continuo are in TWV 42; those for three instruments and continuo are in TWV 43, etc. The letter indicates the key – in this case, both trios are in g minor – and the last digit reflects the chronological order in which the piece was composed, as compared to the others in that category.)

In the center of the program lay Bach's Adagio from Toccata, Adagio, and Fugue. Characterized by an undulating dotted rhythm, the music is extraordinarily soothing, and the sound of the organ filled the pretty little sanctuary with peace.

Next month (October 26), the ensemble travels back to the Baroque's early years to find the Italian influence in the Viennese court of Ferdinand II. It should be an interesting journey.