Powerful and Primitive, The Rite of Spring Closes 80th Season 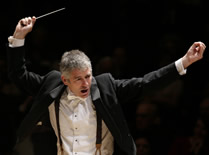 Taut rhythms, brisk tempos, incredible pianissimi and erupting fortes made this one of the best Sacre du Printemps performances this reviewer has heard. Indeed, this was a superb concert for many reasons, not the least of which are the high quality playing of the North Carolina Symphony and the intelligent musical leadership of its music director, Grant Llewellyn, who will celebrate his 10th season with the NC Symphony in the fall.

Opening with a sensuous and delicate performance of Debussy's Prelude to "L'àprès-midi d'un faune," an alluring and mystical poem by French poet Stephane Mallarmé, principal flutist, Anne Whaley Laney turned in a performance of a life-time, starting so soft as to tantalize, and fulfilling our longing throughout the performance. Oboist Melanie Wilsden subtly and seamlessly took over the line without our being aware of the transfer. The entire wind section of the Symphony was discrete and subtle in this terrific performance, marred only by a couple of intonation problems which cleared up in short order.

An elegant and sparkling performance of the early symphony by Haydn, No. 8, Le soir, "The Evening," followed, featuring outstanding solos from all the string principals, most notably the principal double bass (violone, in Haydn's time), played by Leonid Finkelshteyn. The symphony as we know it today was invented by Haydn, who wrote over a hundred of them. Comprised of the now usual four movements, the first movement is in a jolly 6/8 meter (like a gigue) and the second in a stately gavotte-like duple meter. Anticipating Beethoven's refinement of the stately minuet into the scherzo, Maestro Llewellyn, conducted this Haydn Menuetto in one, almost like a ländler. The last movement, La Tempesta – Presto, with its rapid repeated notes, was brilliant in its portrayal of an evening storm. As the maestro commented after the applause – "Don't you always feel good after some Haydn?" We certainly did after this performance!

The brief early work, "Fireworks," Op. 4, which sparked Serge Diaghilev's interest in the young Stravinsky was the last piece before intermission and sounded like an exercise in orchestration - brilliant and colorful.

But surely the large crowd that filled Meymandi Concert Hall was there for The Rite of Spring! What sparked a riot at its first performance a century ago now sounds rather tame and provoked a well-deserved standing ovation. The brilliant orchestration of the previous Fireworks now fulfilled its promise as musicians began filling every nook and corner of the spacious stage – five assorted flutes, five oboes of varying size, an equal number and mixture of clarinets, bassoons and trumpets, only to be outnumbered by eight horns and a small army of percussionists – not to mention four tubas. Llewellyn took care to let us hear examples of what new sounds we would be hearing – not since Leonard Bernstein or Michael Tilson Thomas has a conductor spoken so intelligently and wittily about the music about to be played.

Although much has been made of a bi-tonal chord heard obsessively and repeatedly after the mysterious introduction, it was probably not this chord itself that provoked the riot in Paris, but the appearance at that moment of the female corps de ballet completely clothed from head to toe in dark hooded cloaks, taking tiny stomping steps in rhythm to the music. Ballet in Paris was for beautiful ballerinas in tutus and in elegant poses, not pagan rituals! Concert performances a year later (without dancers) were politely accepted and applauded. The opening bassoon solo, in its ridiculous high tessitura, was admirably played by principal bassoonist, John Pederson! At the Paris opening a century ago, Camille Saint-Saëns was said to have remarked on stomping out of the hall, "What is that castrated instrument?"

Several dozen members of the audience asked intelligent questions of conductor Llewellyn, bassoonist Pederson, and composer J. Mark Scearce, who also presented a pre-concert talk to an overflow audience in the Swalin Lobby of the Duke Energy Center.

This program will be repeated in the same venue on the evening of May 18. For details, see the sidebar.