Verdi's Aïda in a Splendid Performance from North Carolina Opera 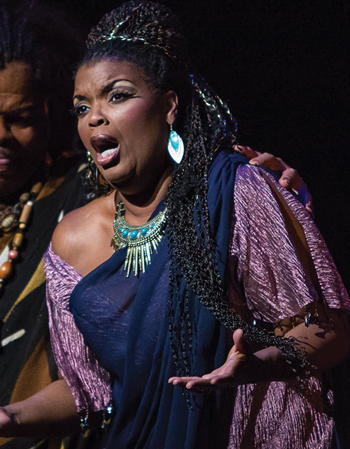 The ecology of our classical music culture is so strongly focused around instrumental music, both symphonic and chamber works, that we forget in the early twenty-first century that things were once otherwise. Throughout most of the Western world, the music and culture that dominated the public's attention was opera, the original multimedia spectacle, in a way similar to that in which feature films and television now monopolize the leisure time of the middle classes, to the exclusion of literature, whether fiction or non-fiction. Opera provides its adepts with a certain guilty pleasure, the sensation that this genre is somehow impure, contaminated with a meretricious theatricality, in contrast to the intellectually defensible appreciation of "absolute" music, represented in the academy most particularly by the instrumental works of Beethoven, especially the late string quartets, and the counterpoint of the supreme master, Bach. Not for nothing did the former compose only a single, unsuccessful opera (Fidelio) and the latter, not a one. Boston, arguably the center of the intellectual life of the United States, has no opera house, and its Symphony Hall has but a single name above the proscenium arch – Beethoven.

And yet while Beethoven lived, and for many years after, the most prestigious musical genre was grand opera, the nineteenth-century development of the early opera seria, combining virtuoso solo roles (from the Italian tradition) with astounding theatrical effects and massive choruses (from the French tradition), with the leading figure in the genre being the Parisianized German Jew, Giacomo Meyerbeer, born Jacob Liebman Beer (1791-1864). Opera was the thing, and instrumental composers produced elaborate fantasies on the themes from the most familiar works for the stage. There were certainly many cities that waited for the twentieth century to hear performances of all the Beethoven symphonies, while the leading operas were performed worldwide by traveling companies (it was at the Brazilian premiere of Aïda in 1886 that Toscanini, a cellist, first wielded a baton).

Meyerbeer is undeservedly forgotten today, but his influence is clearly present for the two major figures for the operatic stage from the following generation, Wagner and Verdi, both celebrating the bicentennials of their births this year. Two of Verdi's operas were commissioned for Paris, and originally composed to French libretti, including the opera immediately preceding Aïda, Don Carlos, from 1867. Although Aïda was composed in Italian for its premiere in Cairo, there is considerable influence from the Parisian tradition, particularly the importance of its choruses.

North Carolina Opera's production of Aïda was semi-staged in its performance in the excellent acoustics of Memorial Hall at the University of North Carolina, but this must have been the only facet of the splendid rendition of this work that even the most fastidious could conceivably complain about. The vocalists performing the principal roles were uniformly strong and full of character. Angela Brown, singing the title role, has a large and powerful voice, so much so that even this demanding part seemed far from pushing her to her limits, and she was an affecting stage presence as the suffering enslaved daughter of the king of Ethiopia. Radames was sung by Issachah Savage, who produces a bright, clear and potent sound, consistent throughout, and his power and presence were welcomed with loud ovations after his very first aria. Brown and Savage, both African-Americans, are still in the early years of their career, and NC Opera's decision to cast so many important roles with African-Americans (including bass Kenneth Kellogg, a tall and imposing presence, with a strong voice, as Ramfis) made this critic think about what positive results could be achieved if only young African-American men and women had the same incentives to go into opera that they have for football and basketball. Where is the far-sighted donor who will endow opera scholarships for young vocalists at the universities of North Carolina?

The actress playing Amneris has the difficult challenge of gaining the audience's sympathy for the third point in the love triangle, the loving but unloved daughter of the Pharaoh, who wants Radames for herself, and has all the power of the state behind her. Mezzo Leann Sandel-Pantaleo tore up the stage with her solo moment in Act IV, with a compellingly dramatic sound and presence. And Todd Thomas as the captive king of Ethiopia, Amonasro, was an electric and threatening baritone, with every word crystal clear and menacing as only sung Italian can be.

The orchestral and choral contributions under the baton of conductor Timothy Myers, with the orchestra upstage of the stage action, were first-rate, with the piano and pianissimo moments especially telling, particularly the "Liebestod" closing the opera, with the doomed lovers Radames and Aïda waiting for their redemption in heaven. The chorus was powerful (kudos to chorus master Scott Macleod), and costumes, scenery and scenic projections deserve praise as well. Bravo to NC Opera for taking on such a demanding task with such notable success!

The opera will be repeated in Raleigh on May 5. For details, see the sidebar.