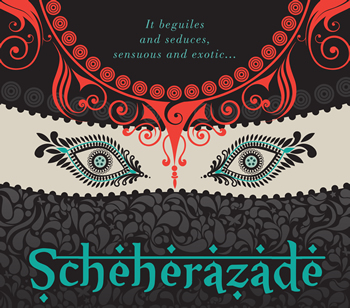 The performances take place on Friday and Saturday, April 26 and 27 at 8 p.m. in Meymandi Concert Hall in the Duke Energy Center for the Performing Arts in downtown Raleigh, and Sunday, April 28 at 8 p.m. in Memorial Hall on the campus of the University of North Carolina at Chapel Hill.

Scholar Dr. Richard E. Rodda writes “the stories on which Rimsky-Korsakov based Scheherazade were taken from the Thousand and One Nights, a collection of millennium-old fantasy tales from Egypt, Persia and India first introduced to Europe in 1704.”  He goes on to say, “Scheherazade was a success at its premiere in St. Petersburg in December, 1888, and it has remained one of the most popular of all symphonic works.”

Originally from Michigan, Paul Randall grew up in a very musical family; his father was a professional musician and so is his sister. His professional career began in 1973 at the age of 17 when he auditioned for, and was hired by the New Orleans Symphony as Second Trumpet. In 1977, he became Principal Trumpet, performing with the orchestra in such places as Paris, Vienna, and New York's Carnegie Hall. In 1988, Randall was appointed Principal Trumpet of the North Carolina Symphony.  He has been a soloist many times with both orchestras, as well as at the Eastern Music Festival, where he premiered a concerto written for him by Carl Roskott. In addition to EMF, he has performed with the Grand Teton Festival, the Chautauqua Festival, and the Casals Festival in Puerto Rico, among many others.

In addition to stellar performances, North Carolina Symphony concertgoers can enjoy pre-concert talks and “Ask A Musician,” which feature interactive conversations with guest artists and select orchestra members, at many Symphony events. For the Raleigh performances, Catherine Brand of WUNC will host a “Meet the Artists” session April 26 at 6:30 p.m. in Swalin Lobby of Meymandi Concert Hall.  Dr. Tom Koch of N.C. State University will give a pre-concert talk April 27 at 7 p.m. in Swalin Lobby.  There will be “Ask A Musician” opportunities in the lobby at intermission. For the Chapel Hill performance on April 28, Dr. Letitia Glozer of UNC will host a pre-concert talk in Gerrard Hall at 7 p.m.

The Symphony boasts two spectacular home venues: Meymandi Concert Hall at the Duke Energy Center for the Performing Arts in downtown Raleigh and Booth Amphitheatre in Cary, N.C. The Symphony also travels 12,000 miles each year to present concert series in Fayetteville, New Bern, Southern Pines and Wilmington; individual concerts in communities across the state; and one of the most extensive education programs of any U.S. orchestra.  For more information, visit the North Carolina Symphony website at www.ncsymphony.org or call toll free 877.627.6724.

Nikolai Rimsky-Korsakov (1844-1908): Scheherazade, Op. 35
I.   The Sea and Sinbad’s Ship
II.  The Story of the Kalandar Prince
III. The Young Prince and the Young Princess
IV. Festival at Baghdad – The Sea – Shipwreck