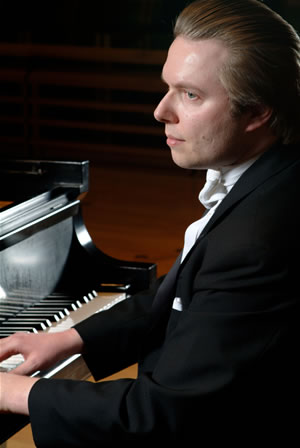 This preview has been provided by the Greensboro Symphony Orchestra.

French composer Maurice Ravel (1875-1937) was well known in his homeland but it was a trip he made to the United States that not only joined musicians from two continents, but also blended some “new” American music with the impressionistic music that was so much a part of his style. And a result of this trip was his Piano Concerto which will be performed by the Greensboro Symphony and guest pianist Ignat Solzhenitsyn this week.

On January 4, 1928, Ravel boarded the ocean liner France and set sail for New York. The trip was arranged by the Pro Musica Society and supported by the Association Francais d’Expansion et d’Archanges Artistiques. Ravel was to make a minimum of $10,000 and stay in the “new world” for two months. He stayed for four.

“This Doesn’t Happen to Me in Paris”

One of the early highlights was a concert of his music by the Boston Symphony Orchestra. Ravel later recalled that at the end of the concert “I had to appear on stage. There was a standing audience of 3500 who gave me a tremendous ovation, climaxed by whistling.” Afterwards, he turned to fellow composer Alexandre Tansman and said, “You know, this doesn’t happen to me in Paris.”

The tour took him from the East Coast to the West Coast, from the Gulf South to Canada. He saw such natural wonders as the Grand Canyon (he was very impressed) and Niagara Falls. But the biggest musical impact on Ravel came in New York City.

While in the Big Apple, the French composer had a birthday party, and one of the guests was George Gershwin. Ravel especially wanted to meet the composer of "Rhapsody in Blue", and Gershwin performed for him. The two great musicians went up to Harlem to hear American Jazz at its best, listening to Paul Whiteman and perhaps even Duke Ellington. No one knows if Ravel heard the “Duke” for sure.

Down the Mississippi River

Later on the trip, Ravel went down to New Orleans where he heard jazz in its birthplace. After hearing this native American music in two of its most influential cities, Ravel became captivated by these “new” sounds. But he was actually surprised that more American musicians did not take to this music. He said, “Jazz is a very rich and vital source of inspiration for modern composers and I am astonished that so few Americans are influenced by it.”

It was the rhythm that Ravel was so taken by. So much so that he later wrote, “The most captivating part of jazz is its rich and diverting rhythm.” And it was these jazzy rhythms that Ravel began to incorporate into some of his own music.

Jazz Elements in the Concerto

He composed his Piano Concerto in G Major in 1929-1931. Ravel later wrote about it: "This concerto, which I propose to perform myself, is a concerto in the strictest sense of the term… it is bright and brilliant … it uses some jazz elements.”

When Ravel said that he “proposed” to play the premiere, he was expressing some wishful thinking. An ailment prevented him from being the soloist at the first performance. Although Marguerite Long played it, Ravel was still part of this performance — as the conductor.

During his tour of the United States, there was a great sharing of cultures. American audiences heard the impressionistic music of Ravel, and the French composer heard jazz and then incorporated it into his own style.

About the only down side of the trip for Ravel was the food. After he had complained that meat in United States was usually overcooked, the food at his birthday party included some almost-raw red meat, served just to please him. And American cooks apparently thought the thin Frenchman did not have much of an appetite, because Ravel was frequently hungry even after meals. He remarked that, in Paris, “everyone knows that I am a carnivore.”

He may have left the United States a little hungry, but he took jazz influences with him. And music has been better because of it.