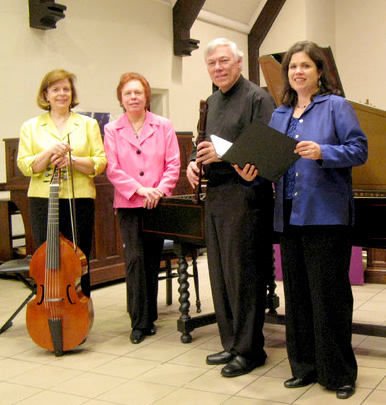 Celebrating 35 years together, the instrumentalists of Carolina Pro Musica showed no signs of complacency preparing for their anniversary concert at St. Martin’s Episcopal Church. Indeed, audience members who took their seats a half hour or more before the program began could watch Pro Musica’s artistic director, Karen Hite Jacob, leading their final rehearsal from the harpsichord. The two other core instrumentalists, Edward Ferrell and Holly Wright Maurer, were also onstage, joined by four guests: Tom LaJoie and Laurel Talley on baroque violins, Christina Sienkiewicz on viola, and Henry Trexler on bass viol and double bass. The only Pro Musica person not in evidence was their junior member, soprano Rebecca Miller Saunders, who proved more than sufficiently prepared for her forays into Bach cantatas 202 and 210. The program began by spotlighting Jacobs in Bach’s Concerto in D for Harpsichord, BWV 1054, before showcasing Ferrell and Maurer in Telemann’s Concerto in A minor for Recorder and Viol, which was sandwiched between the two vocal selections.

With Saunders and Ferrell sitting out the harpsichord concerto, instrumentation was harpsichord, two violins, double bass, viola, and Maurer playing the viola da gamba. So if the tuttis were lacking in the forcefulness we’re accustomed to from a large ensemble, each of the strands was clearer and the harpsichord was more readily discerned when Jacobs wasn’t soloing. Pacing was slightly slow in the opening Allegro, and though a couple of off-key sounds came from the strings, the harpsichord sound was nicely warmed by the hall, delivering a pleasantly plucked sweetness. Slowing down for the ensuing Adagio e piano, Hite’s playing retained a nice body at soft volume, although a slower pace might have captured more gravitas and contrasted more effectively with the opening. A little more contrast wouldn’t have hurt the closing Allegro, which came off a stride or two too slow, but a quickened gait could have hurt the playing, still not perfect at this cautious speed.

Programming two of Bach’s three wedding cantatas, the core Carolina Pro Musica quartet chose only one of the five soprano arias from S. 210, O holder Tag, erwünschte Zeit, likely because its obbligato works so beautifully transposed from oboe to recorder. Saunders was in radiant form singing “Schweigt, ihr Flöten, schweigt, ihr Töne” (Be silent, you flutes; hush, you tones), hitting all her staccatos and crescendos flawlessly while Ferrell was somewhat shaky at the outset, steadying himself as the soprano reached her more virtuosic passages. It was almost cruel for Saunders to sit down after such an auspicious entrance, but the Telemann offered plentiful consolation with all the guests rejoining the ensemble. Fussing a bit with his mouthpiece after his lackluster start, Ferrell played the opening Largo with a beauty that belied his struggles, and the interaction with Maurer’s viola da gamba was quite captivating. The fine interaction carried over into the Allegro, where Maurer had more of an opportunity to shine. Her agility enabled her to negotiate the challenges of the da gamba part with seeming effortlessness – not altogether a good thing, for Maurer’s playing was perhaps too diffident and underpowered for the music and the hall. Maurer would be more assertive in the finale of this piece, but first Ferrell was at his spellbinding best in the penultimate Dolce, looking very comfortable at this mesmerizing tempo. There were ample reasons for Maurer to discard modesty in the closing Allegro, easily the folksiest music of the evening, and the presence of the extra four string players certainly added to the zest. Ferrell held back a bit, yielding the spotlight to Maurer early on in this festive finale, but he reasserted himself midway through, very secure at the quickened tempo with sure breath control.

Like the 210, the S. 202 wedding cantata has five soprano arias, but now Saunders sang them all, plus the four recitatives for good measure. Ferrell switched to transverse wooden flute for this concluding piece while Trexler, after playing the bass viol for the Telemann, reverted to double bass for the Bach. Once again, as in her selection from O holder Tag, this cantata begins in the imperative mood, “Weichet nur, betrübte Schatten” (vanish now, troubling shadows), and once again, Saunders was commanding at the sweetly languid pace of its beginning, accelerating gracefully for a brilliant midsection before subsiding into repose. The next aria, “Phoebus eilt mit schnellen Pferden” (Phoebus hurries with swift horses), accelerated again to an allegro pace but in 3/4 time as Saunders’ breath control appeared to its best advantage. Only in the middle aria, “Wenn die Frühlingslüfte streichen” (When the spring breezes blow), was there a hint of strain in the singing, but “Sich üben im Lieben” (To become adept in love) returned us comfortably to a 3/4 allegro – and Saunders’ tessitura. Solid throughout on traverso, Ferrell was especially brilliant accompanying this aria. Whether in the arias or the recitatives, tempos were perfectly judged in this cantata, but the folksy finale, “Sehet in Zufriedenheit” (Behold in satisfaction), deserves special acclaim, for the ensemble managed to layer on a processional dignity over the festive jubilation.