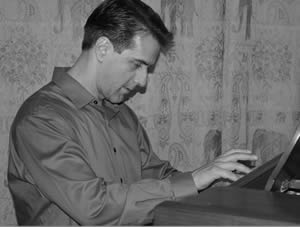 For a full week in February, the Clayton Piano Festival took on the mission of exploring various voices of the classical piano. In a week that began with American composers and ended with complex piano solos with orchestral adaptations, the Festival moved through compositions inspired by fantasy, horror, and love. Though the compositions of Ravel, Liszt, and Mussorgsky represent very different stylistic approaches to compositions for the piano, they married well for a comprehensive repertoire for the Friday evening performance of “An Orchestra of One.” Selections for the solo piano such as Maurice Ravel’s Le Tombeau de Couperin, Franz Liszt’s arrangement of Isolde’s Liebestod by Richard Wagner, and Modest Mussorgsky’s Pictures at an Exhibition all exist in arrangements for full orchestra, demanding great versatility of the piano and great virtuosity from the pianist. With unassuming artistry, Craig Ketter was just the virtuoso for the evening. Mr. Ketter was accompanied by Dr. Randolph Foy, accomplished in his own right, who provided enriching history for each piece. Together the pair presented a well-rounded evening of innovative composition and fine musicianship.

Ketter began with Ravel’s Le Tombeau de Couperin, each movement written in memory of Ravel’s friends lost in World War I. With a delicate and simple approach, Ketter elicited a different tone for each of the six movements. From the clean cross-hand playing in “Rigaudon” (IX) to the brisk intensity of the “Toccata” (VI), Ketter gave voices to each of the movements, surely as distinct as the men for whom they were written.

With a touching dedication for Isolde’s Liebestod, Ketter established a personal attachment to the piece, full of romantic themes that contrasted sharply with the following Mephisto Waltz I by Franz Liszt. With its unresolved conclusion, revolutionary for its time, as Foy conveyed, the difficult and impressive waltz provided a distinct conclusion to act one.

The final composition, Mussorgsky’s brilliant inspiration, Pictures at an Exhibition showcased the versatility of both composer and pianist. Based on a series of paintings from Mussorgsky’s friend and artist Viktor Hartmann, Pictures at an Exhibition evokes imagery of eleven of Hartmann’s paintings, separated by Mussorgsky’s familiar “Promenade,” in which the composer is imagined to be strolling between works in a gallery. Ketter painted specific images with each movement that were perfectly suited to the titles, paying true homage to Mussorgsky’s innovation.

The theme of the evening, and even the week, was versatility – of both composers and musicians. Craig Ketter successfully depicted the sentimentality of Ravel’s Le Tombeau de Couperin, the complexity of Liszt’s juxtaposed works Isolde’s Liebestod and Mephisto Waltz 1, and the varied voices of Mussorgsky’s Pictures at an Exhibition. All in all, Clayton Piano Festival’s thoughtful programming, Foy’s informative input between works, and Craig Ketter’s quiet brilliance accomplished the ultimate achievement of the week and brought due recognition to some of classical music’s finest contributors.